Friend of the Devil

If you’re running with the devil, hellbent on evil, it’s likely you have no friends. 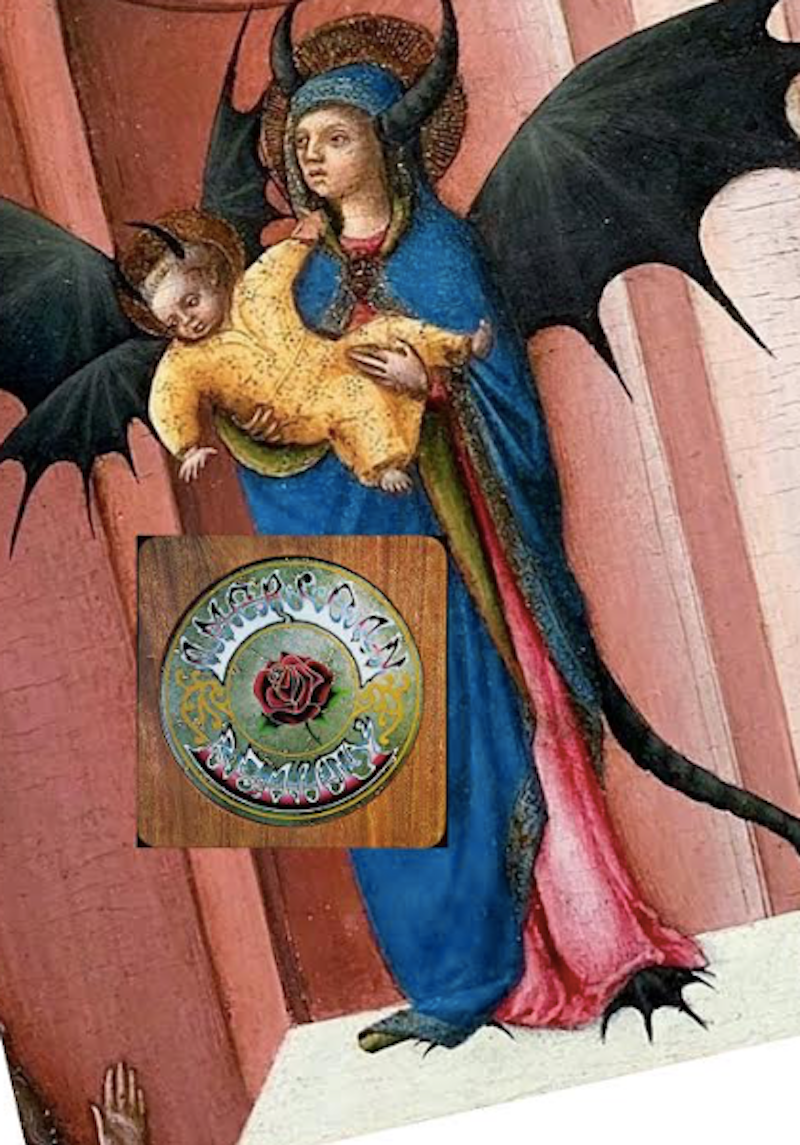 If you’re running with the devil, hellbent on evil, it’s likely you have no friends. When you’re on the lam, nobody’s watching your back. Extended families of loners, that bunch that form a loose-knit community of rebels who join bands and gangs to become part of something greater. From SF’s Haight Ashbury to NYC’s Lower East Side, the alternative folks gathered. The devil's roots spread with Biblical tales, gangs of fallen angels roamed, right on through Faustian folklore, European poetry and tales of horror fiction. The Mephisto Waltz, dancing with Mr. D, may be a dangerous duet. “Friend of the Devil” is a Grateful Dead song recorded in 1970 on the American Beauty album. The song was re-recorded and covered over 50 times by various artists, including Dylan, Petty, Guns & Roses, plus various iterations of the original Grateful Dead band. Reaching new heights as elevator Muzak. Beating out The Rolling Stones’ “Sympathy for the Devil.” But I’ll still listen to The Stones over the Dead any year.

I never got the Grateful Dead. I know, grasping all those connect-the-dots notes, follow the bouncing freak scenarios. Ken Kesey, the acid tests, riding around America with the Merry Pranksters, commandeered by Neal Cassidy. In the words of Kesey’s son, Zane, “There was always room for another bozo on that bus.” Forget the maddening hordes of deadheads following the Grateful Dead around the country for decades on never-ending tours. The cheap psychedelic windowpane and blotter acid, in 100 hit sheets, fit perfectly in Hallmark greeting cards. Mung bean sprouts and Muenster cheese powerhouse sandwiches, granola and tie-dyed everything. Foul-smelling incense with names like Money, Pussy, Cocaine, and Good Luck. Cloaked the ever present odor of weed and hashish blended with strawberry wine, and patchouli stench. Flipped wigged, spaced-out earth mamas dancing barefoot in the moonlight mud to an extended 40-minute guitar solo. Jerry Garcia, wanking off, noodling away on guitar while the entire crowd tripped out, saw god, death, birth, and rebirth all together, fucked up, balls to the wall.

The 1950s beat culture spilled over, flooding the 60s afterbirth of flower children, freaks of the hippie revolution. The new generation taking over at a critical mass crossroads. A lot can happen in a decade, and the 1960s were no different. Long hair, freak flags, exotic hallucinogenic drugs, peace, love, and the old devil at it again. From Altamont and the Manson Family murders to mass murder and riots in the streets. Dinner with the devil implies getting in bed with nefarious types, keeping a safe distance from the dangerous and desperate. Those hunted, troubled, unholy souls. The born losers, created in cahoots with less than charitable creatures. Treading on shaky ground. In the music business, it’s called paying your dues. There are all kinds of shady characters to peddle the next big thing to come along.

Out of the mythology of good and evil, right versus wrong, love and hate, the music industry brainwashed youth culture to reject war, big brother government, authoritarian Christian hypocrisy and mass consumer consumption. Not necessarily a bad thing. That is, until rebellion became its own marketing tool. Nothing personified this more than the alternative lifestyles of The Grateful Dead: their legacy became a multi-million dollar juggernaut. The latest infractions include the Ramones, Clash, Sex Pistols and other big-name acts who embraced the almighty dollar. Spearheaded by the Beatles, Stones, and so many other dinosaurs of rock’s big box office, cashing in on counterculture. Is nothing sacred or profane? The prehistoric gods of schlock rock music sellout. Pink Floyd's on tour. Again. Will Jethro Tull be on Broadway? Led Zeppelin will never reunite. Jerry Garcia neckties still sell like crazy hotcakes. From a dude who most likely never wore a tie, and was once quoted saying the tie represents a corporate hangman’s noose. There was a time when rock ‘n’ roll was perceived as a threat to the sanctity of the American way of life. It’s now lame, tame, and common. There’s a little devil on your shoulder telling you to be a rebel. Heaven’s for chumps who believe in the afterlife. All of your friends won’t be there. For now, here, listening to the imaginary music in my head. It sounds like radio static. I can't stand loud music anymore.