Ghost in the Soft Machine 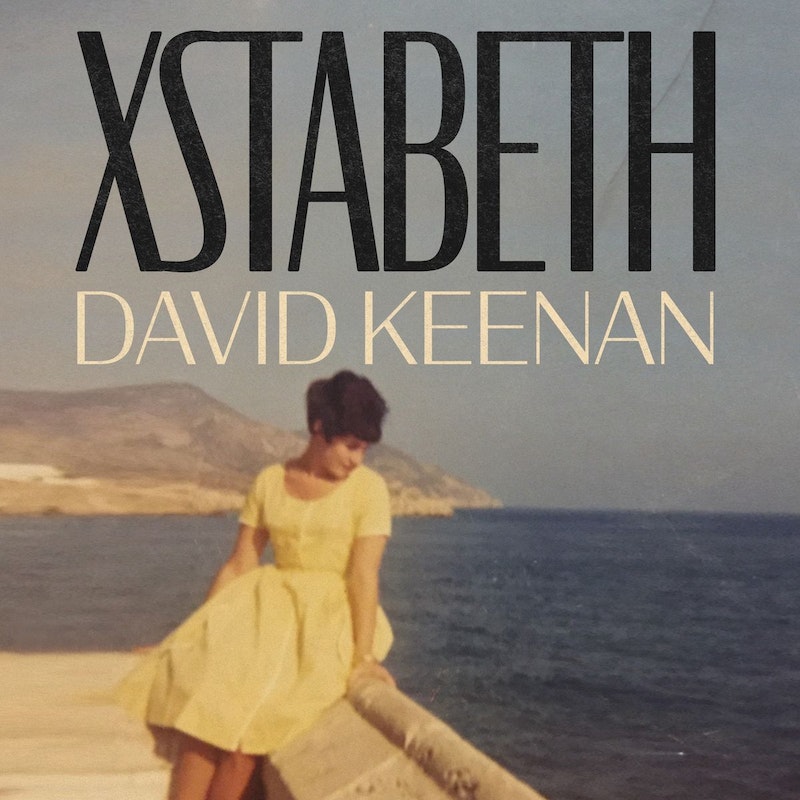 Fans of experimental fiction should grab Xstabeth by David Keenan when it comes out in February 2022, because after this edition from Europa Editions, it may never see print again. It’s that odd. And that good. Keenan’s a Scottish writer, though I hesitate to say much more, since this book has two different bios. According to the one on the cover, and his Wikipedia page, he’s still alive, and has published two other novels. According to the bio appearing before the title page, he’s dead, killed by throwing himself from a tower, after self-publishing his only book, Xstabeth. I’m going to go with the first bio, but who knows?

Xstabeth is a short novel—more of a novella—about an 18-year-old Russian girl (though she “reads” a little younger) named Aneliya living with her father in a Siberian city called St. Peter’s. Her father is a has-been famous singer-songwriter in the Leonard Cohen style. Her father’s friend, Jaco, is a more famous musician and also some kind of philosopher. Aneliya begins a secret affair with him in the first part of the novel, and by the second part, when she and her father take a vacation in Scotland, she begins an affair with another older man, while her father gets involved with a young woman Aneliya’s age.

Told from Aneliya’s point of view, here’s how it starts:

When I was small and the trees were very high. This was in Russia. My dad was a musician. A famous musician. But he was friends with a musician who was even famouser. I went to his lecture. The famouser musician. He did a lecture. His specialty was moral philosophy. But in this lecture it was different. In this lecture he spoke against morals. I couldn’t believe it. My teenage mind was like that. What. He said it was okey to be immoral. That’s what he said. In so many words. Words like “permission,” “authority,” “refusal.” “Autonomy.” I remember that one. “Belief.” That was still key. Funnily enough.

That question of belief will come up throughout the story: belief in some kind of power. Belief in other people. Belief in your family members. Belief in yourself. The “stilted” style continues throughout, and this is just an excerpt from one long paragraph. But despite the length of the paragraphs, Keenan’s style is still minimalist, like Raymond Carver or Marguerite Duras, with emotions buried at the bottom of the iceberg. The “stilted” style is really a hesitancy on Aneliya’s part, as she narrates what happened, as if she can’t quite believe it, or trust herself to tell it correctly. In that sense, while “experimental,” Keenan’s writing style isn’t unnatural-sounding. Aneliya sounds and feels real.

In between chapters, “former students” of the “late” David Keenen have added vignettes of their own writings from workshops with him. The second Keenan bio claims that these students found the manuscript after his death and published it. All of these students are women, which adds a sense of approval to a potentially “problematic” novel, by an older man, about a teen girl-woman having what some might call inappropriate affairs with older men. But, in any case, these vignettes break up the minimalistic story with bursts of maximalism, as in this piece, by “Frances McKee,” called “Memory in Xstabeth”:

But there’s more to be said about what makes significance. Significance is the ghost in the (soft) machine. Some might say God is the ghostly significance in the heart of the (soft) machine. Some might say that “we,” i.e. “us,” i.e. “the self” is simply an agglomeration of memories, which makes the self more like a moth-eaten sheet if you think about it. What about all that is never remembered? Which, if you think about it, is most of it. how much of yesterday do we even have today? Are we less than ourselves as a result? Or is the self by definition something that is diminished, something that can only exist as a shadow of a totality?

If the rest of the novel is Aneliya’s solid thing-ish fragments, anchored in physical reality, these vignettes feel both philosophical and lofty, and melodramatic. Perhaps as a joke. Perhaps not. Fortunately, they don’t go on too long.

They do expand on the idea of who, or what, Xstabeth is. The back cover summary calls her/it an “angelic presence” but that doesn’t sound right. She—that’s what the characters call her eventually—is more like a higher power who works on a creative level, or infuses their lives with creative bursts. Not a Muse so much as a Grace, not a saint so much as a pagan god. Mostly Xstabeth appears to Aneliya’s father, in the form of a bootleg vinyl album—called Xstabeth—of a recent live performance of his. And it appears without his knowledge, as if magically. Aneliya too becomes wrapped up in Xstabeth, though she experiences doubt as to whether Xstabeth is a trickster figure or a hoax. The vignettes don't offer explanations, only more possibilities. If that sounds mysterious, that’s the novel, when most of the story takes place on a gritty realist street level of life. Though this novel may be the work of Xstabeth too!

Experimental style mixed with street grit brings to mind another Scottish novelist: Irvine Welsh, known mostly for his first novel, Trainspotting, and its movie version. Welsh has continued to write about working-class and underclass lives in Scotland in subsequent novels, always with  experimentation, which doesn’t stop readers from enjoying them. Maybe being so far from London allows the Scots to feel more freedom to experiment. Maybe the experimentation is some kind of rebellion against “proper” British writing. My point is that no matter how odd-looking and odd-sounding, and not for everybody, Xstabeth by David Keenan is very accessible, and will appeal to readers looking for something beyond the London/New York publishing world.