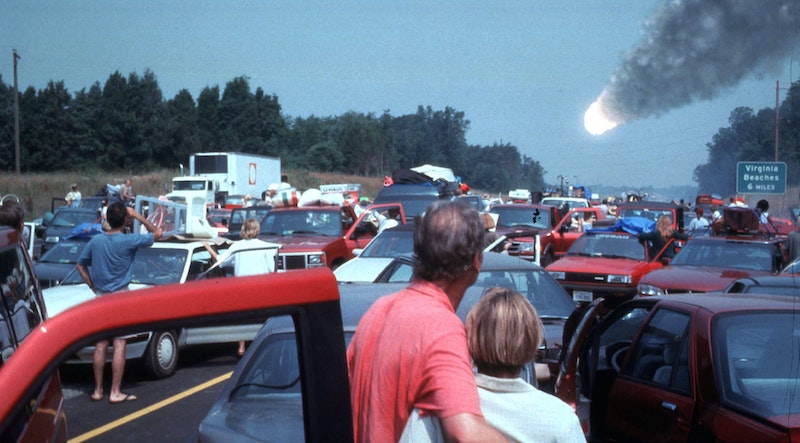 NASA’s DART spacecraft, or Double Asteroid Redirection Test, launched in November, is supposed to smack into an asteroid called Dimorphos next autumn. This will be a technology test for diverting an asteroid, a capacity that’s needed in case one’s ever found on a collision course with Earth. Dimorphos, at 160 meters long, is in a class of potential “city killers,” and there are larger ones out there that could bring worldwide destruction.

Dimorphos, also known as Didymos B, is coupled with an 800-meter-long asteroid called Didymos. In 2003, this pair came relatively close to our planet at a little over seven million kilometers, and this was when the smaller asteroid was discovered; the duo will not be so close to Earth again until 2123. The DART mission will slightly change the speed of Dimorphos’ orbit around Didymos, holding no danger of diverting the whole system towards Earth.

Copyediting an article about DART recently, I was toggling between my work and Twitter; the latter was filled with “woke vs. anti-woke” conflicts, as I follow many political types. I thought about how such contretemps would fade into insignificance if an asteroid were on the way. The DART piece included one astronomer, a Hispanic woman, talking about the benefits of a “kinetic disruptor”—slamming into an object rather than, say, nuking it—and I slipped into a reverie imagining DART eclipsing Latinx as a doomsday space rock hurtled toward Earth.

Whether a crisis would unite humanity, however, may depend on what type of crisis it is. COVID-19 has exacerbated divisions, something that at first glance seems less likely to occur with an asteroid crisis; the latter presumably would be less susceptible to blame-assigning among nations and groups, and its remedies wouldn’t involve changes to personal behavior. Then again, it isn’t hard to imagine hearing that Trump would’ve handled the asteroid better, or that reports of its coming are false, or that someone deviously put it on this trajectory.

Besides the prospect of an impact, asteroids hold the promise of vast mineral wealth; tapping such resources is sometimes even suggested for reducing impact risks, as a threatening object could be mined into oblivion. Another NASA mission, to be launched next year, will explore Psyche, a metal-rich asteroid orbiting in the main asteroid belt between Mars and Jupiter. Psyche’s metals have been valued at numerous trillions of dollars if they were extracted, though such pricing would have to be adjusted as the market absorbed such a hoard.

In the 1990s, when I was first writing about asteroid-mining and sketching out how extraterrestrial property rights could work, there was a certain amount of optimism that such things might happen in the not-very-distant future. In the 2020s, despite space tech advances such as SpaceX’s Falcon Heavy, it’s wise to take a more circumspect view. There’s a long history of overpromising what’s going to happen in space. There also could be a great deal of public and political resistance to space ventures, as indicated by the often-negative commentary on recent ventures into space tourism. Worrying that most people don’t have the same access to orbit as billionaires is facile posturing. Yet some concerns about space ventures, such as on the environmental impact of satellite mega-constellations, aren’t readily dismissed.

Space always holds potential to shift the storyline of whatever’s happening on Earth. China’s recent circling of the globe with a hypersonic missile test sparked calls from the Pentagon to treat this as a “Sputnik moment.” The original Sputnik moment brought a U.S. emphasis on space that would unleash technological breakthroughs over the following dozen years that included planetary probes and the arrival of humans on the moon. Satellite communications, navigation and other services have changed everyday life in far-reaching ways such that access to space technology is now ubiquitous and often taken for granted.

The ability to push an asteroid into a new trajectory is something that requires uncompromising standards in science and math. Late next year, when DART encounters Dimorphos, we’ll get a glimpse of a prospective future in which humanity protects not only itself but all life on Earth.