Found in the Ozone 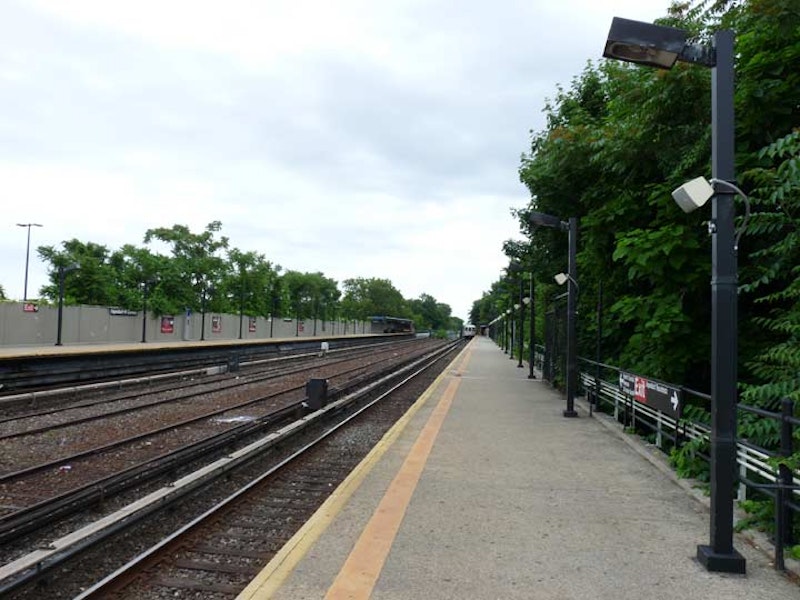 Because of its proximity to John F. Kennedy International Airport, I’d always thought Ozone Park’s name had something to do with air travel, since the ozone layer is high in earth’s atmosphere. I was wrong. When developers Benjamin Hitchcock and Charles Denton built lots of small houses immediately south of Woodhaven in the 1870s, they took a name that would be evocative of fresh air and cool breezes far away from congested Manhattan, and that’s the connotation the word “ozone” had back then.

Next door in Howard Beach. William Howard’s resort complex was built on the shores of Jamaica Bay at the 19th Century’s turn and became a ritzy bathing and boating center, quite a change from its earlier incarnation when the shoreline was bordered by fishing shacks. Howard, a glove manufacturer by trade, built the majestic Hotel Howard at the foot of today’s 98th St. in 1899. A spectacular fire brought it down in 1907, after which the meadows and marshes were landfilled; Hawtree and Shellbank Basins were dug out and the residential community found there today arose. Recreational boating is a popular pastime for Howard Beachers today. Howard Beach was home to John Gotti and his family. Gotti, a mobster, extortionist and director of executions, was nonetheless largely supported by his community.

I recently walked around in Ozone Park on a cool, cloudy day before the onset of the blistering heat wave that has the northeast in its grip. The neighborhood is easily attainable by taking the express A train from 34th St. at Penn Station to the North Conduit Ave. station, one of the least-trafficked in the system. It has been part of the NYC subways only since 1956, but before that, it was a station on the Long Island Rail Road Rockaway branch, as were all the stations on the peninsula. The station still bears some telltale signs of its old LIRR legacy such as diamond-shaped platform sections—most other Rockaway stations have been repaved, losing the diamonds.

Place names in these parts, such as Conduit Blvd., North and South Conduit Aves., Aqueduct Racetrack, and even Force Tube Ave. in Cypress Hills, are named for the right-of-way of a former aqueduct that led from Ridgewood Reservoir in Forest Park all the way to the old Brooklyn Water Works in Freeport, which were decommissioned and removed decades ago. Like many locales, though, place names point at history. 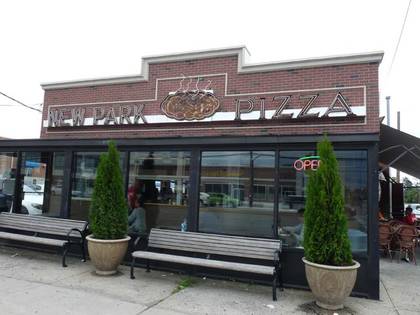 I stopped first at the New Park Pizzeria on Cross Bay Blvd. and 157th Ave. The north-south boulevard is a southern extension of Woodhaven and was first bridged across Jamaica Bay in 1925. It has developed into the main shopping and restaurant route in Ozone Park and Howard Beach, and is home to marinas and caterers such as Russo’s By the Bay. The New Park makes one of my favorite slices in the city, with a slightly burnt crust that offsets generous sauce. Wood-fired ovens that produce pizzas such as Totonno’s in Coney Island and Sac’s in Long Island City have their charms, but I prefer a well-sauced slice with a generous tang. Brooklyn’s Di Fara gets the press but it’s matched by New Park.

The New Park has been associated with one of Howard Beach’s more notorious incidents. In late-1986, a group of African-American men were set upon after leaving the New Park by some neighborhood toughs. Michael Griffith was killed after being hit by a car while fleeing the neighborhood mob. The assailants were later convicted of manslaughter and jailed, all serving at least 10 years. 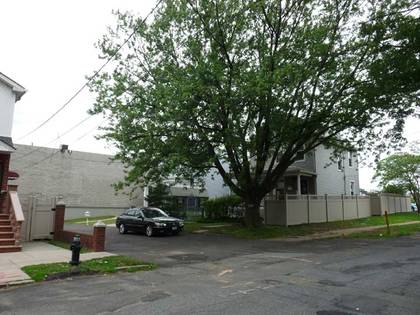 A few maps claimed a Jaegers La. running south from Albert Rd. just east of Cross Bay Blvd. I never believed it; as an alley maven, I’d cycled past repeatedly through the years without finding much evidence. A closer inspection on foot, though, in 1998 along Cross Bay finally revealed the old lane.

There was a clue on Albert Rd., where the corner house faced away from Albert and strangely, toward the driveway. Walking on Cross Bay, though, I saw it: an impossibly old, broken-down Victorian-era house, with four Ionic columns supporting a caved-in porch. A dirt road curved in front of it off into the woods. I’d found Number 11 Jaegers La., as a Cole’s Directory showed.

Soon after, developers found Jaegers La. too. The woods, the lane and the old house were plowed under and new, bland housing was built there. Maps still dutifully proclaim its presence (though curiously, not Google Maps). Jaegers La. is still present as a very short paved lane on Albert Rd. east of Cross Bay Blvd. Two houses face it, with 149-xx addresses.

After seeing a woman exit the nearest house, I politely introduced myself and presented my card, with my website, forgotten-ny.com. My purpose was to determine, once and for all, if this was indeed called Jaegers La., since the Department of Transportation does not mark it—which she did. She was, however, incredulous why I’d ask such a question, seemingly could not comprehend the concept that forgotten-ny.com was a website, and refused to take the card, despite my assurances that I was not a developer trying to purchase her property.

I’ve noticed a trait among some New Yorkers—many of them law enforcement officials—that they believe it’s strange that a person’s curious about the city in which they live. 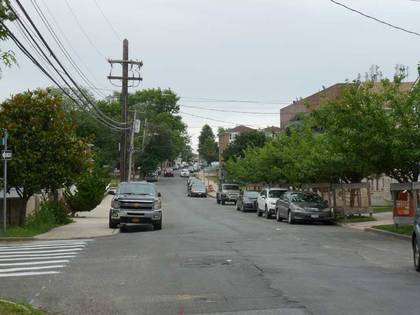 Until after World War I, population was sparse in Woodhaven and Ozone Park, and few roads ventured through. One was Rockaway Rd., on which a trolley line plied; that road, as it does today, ran all the way to the Five Towns area in Nassau County (which was a part of Queens until 1898, when Queens’ three easternmost towns broke away and formed Nassau). There were roads like Van Wyck Ave., that became a boulevard, later an expressway, and now supports the new AirTrain monorail connecting the Jamaica Long Island Rail Road station and Kennedy Airport. There was Three Mile Mill Rd., which ran from Jamaica to the lost community of Jameco, which is now a runway at the airport, and in other sections was long ago renamed 150th St. New York Ave. was a main artery from pre-Civil war days from Jamaica south to Rockaway Rd.; it became New York Blvd. and in 1982, Guy Brewer Boulevard, after a then-recently deceased state assemblyman. Hawtree Creek Rd. still survives under its original name, and The Road to Bergen Landing is now called Lincoln St.

A nearly 200-year old road thought by mapmakers to be completely wiped from the landscape just won’t go away, though. Pre-Civil War maps show an Old South Rd. skirting the marshes along the water conduit that ran from Ridgewood Reservoir east to the Brooklyn Water Works near Freeport. Old South Rd. started near the Brooklyn line and ran southeast to about today’s 150th St. Its line can still be followed in the paths of today’s Pitkin Ave., which takes a southeast turn at about 79th St., and Albert Rd. east of Cross Bay Blvd. East of there, most of it was destroyed in the 1930s when the Circumferential (Belt) Parkway was built by Robert Moses.

Two sections of Old South Rd. survive intact, under its original name: a one-block alley between 76th and 77th Sts. north of Pitkin Ave., and another a few miles to the southeast, from the Belt Parkway (called Shore Parkway in Brooklyn and southern Queens) and 130th St. 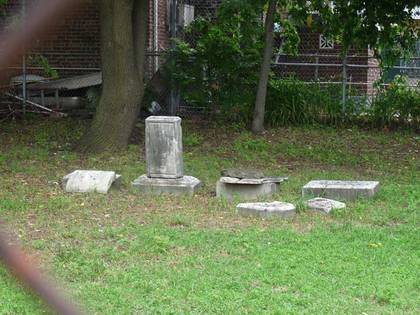 I wandered west to 149th Ave. and Redding St., as there was an item there that I wanted to check up on. Another of Queens’ many vest pocket cemeteries can be found in the triangle formed by Redding St., Albert Rd. and 149th Ave.: Southside Burial Ground. It was originally the family plot of the Van Wicklen farming family, who settled in Ozone Park in the 1660s and whose descendants lived here well into he 20th century. The plot contains 79 graves, of which only four tombstones remain: Charles H. Monroe (d. 1872) and his brother Leander (d. 1873) share a stone; George Earney (d. 1909); Jannet, wife of Garret Van Wicklen (d. 1891). By 2018, all but one stone has toppled to the ground. The property is fenced off and ostensibly protected from vandalism, and is apparently run by the NYC Parks Department, whose leaf symbol is posted on the fence. In addition to the Van Wicklens, may members of the Ryder and Stoothoff families were also interred here. 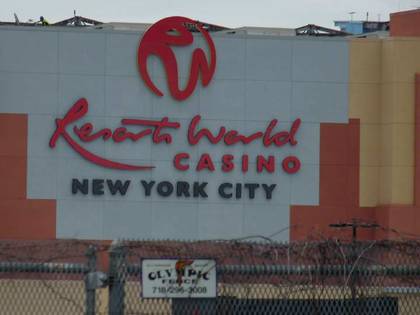 It began to drizzle, so I began to make my way towards Lefferts Blvd., where the Q10 would get me to the Queens Boulevard express trains. I went east on Linden Blvd., which in the 1920s was gradually extended from its Brooklyn run in Flatbush all the way east to Elmont in Nassau County—except for an interruption in Ozone Park and another one at Aqueduct Raceway and the accompanying Resorts World Casino. Legal gaming in New York City had crept up on me—I’d thought legal casino betting was only located in Atlantic City. However, this only legal casino in New York City had opened in 2011. Governor Cuomo has floated the idea of rebuilding the LIRR Rockaway Branch—closed since 1962—to get bettors to the venue faster, but such an event has even longer odds than the casino provides.

I’ve always resisted casino gambling in Atlantic City. My thinking is: Trump and Wynn are already billionaires. Why should I go to their casinos and give them more money? 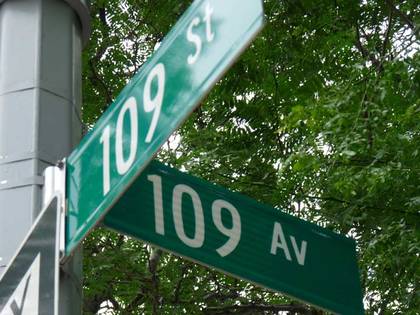 One of the stranger aspects of Queens’ conversion to numbered streets beginning in 1915 is when the numbers are the same. Beginning in 1915, NYC decided to number most of Queens’ streets to repair confusion that had arisen. In effect, the city created a different kind of confusion, but in 1915 it seemed like a good idea. Beginning with European habitation beginning in the 1600s, a handful of major hubs such as Jamaica and Flushing had sprung up but Queens remained a county consisting of small towns here and there, connected by mostly dirt wagon traces—major roads were rare. Many of these small hamlets had their own numbering systems, and many had names like Main, Washington, Lincoln, and plant names—the kind you find in small towns everywhere.

The solution was to give most streets numbers in a single, all-encompassing system. However, there were spots where both the east-west numbers and north-south numbers are the same. You can take a street map of Queens, hang it on a wall and use a ruler and a pencil to draw a line through those neighborhoods where the numbers come together, from Astoria southeast through Sunnyside, Ridgewood, Glendale, Woodhaven and South Jamaica.