American Democracy is a Fish in the Desert

Served on a platter of prejudice. 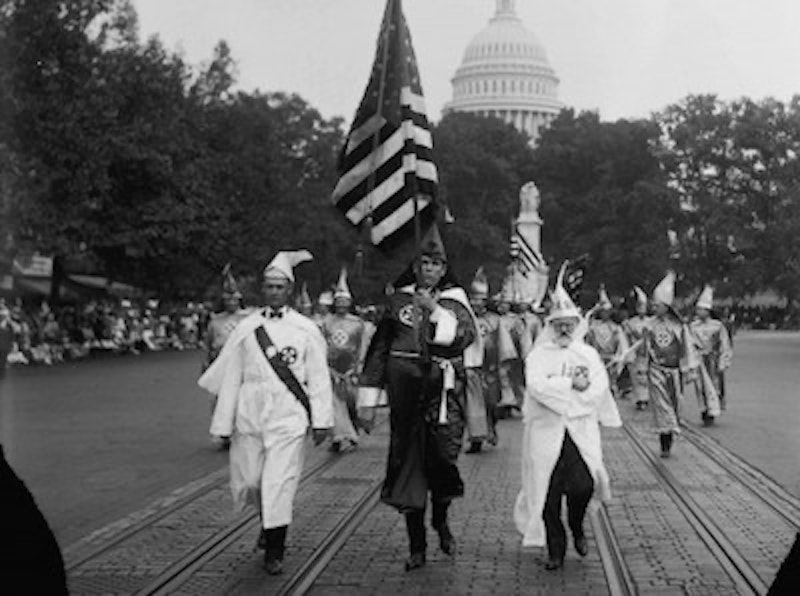 Let's face it: hate dominates the American way of life since the “pilgrims” saw their first Indian. These smelly pale-faced men of Europe set foot upon the shores of this land filled with fear of the noble “savages.” They proclaimed a righteous god’s will gave them permission to plunder, and massacre innocent men, women and children to enrich their sanctimonious lives. After too many months at sea they stunk up the place and brought vermin, disease and psychosis along for the ride. They brazenly stole, murdered, raped and pillaged in god’s name shortly after the first Thanksgiving feast. Pushers of religious dope. Give them Jesus to shut them up. This is the way we always roll, our god is a selfish, vengeful master. In the 1920s-USA the KKK boasted five million dues-paying, card-carrying members. I’d venture to estimate 10 times that number were just everyday racist white folks. That would equal approximately 50 percent of the total population in 1925. If it ain’t white, it ain’t right.

We may not be Nazis, Bolsheviks, socialists, Ku Klux Klan or ultra-right winged angel evangelists here but our god is white, right and full of might. We’re the absolute winners making it great again. A mish-mash of warmongers and money-changers. Vigilantes and bottom feeders. The new super group in a den of thieves, liars, politicos and lawyers. Merchants of death dealing life-changing gimmicks to dull the masses. Where hate is great and love is always too late to any party. Half-truths are better than none. High stress, tension and anxiety that rules this temple. Stop nudging and coaxing us to move about freely as well-documented strangers in an all too well-known land. Uniformly denounced around the world, our little experiment in democracy is a fish in the desert.

All bound up with anxiety, depressed about every damned thing around here. Soft and pliant like two-ply toilet paper. Having it all too fucking easy, served on a platter of prejudice. The cushy life we lead is unbroken but somehow always being fixed to look normal. Search for trouble in all the right places and we’ll find it under every rock. The hide and seek of superiority mocks feeble attempts at equality. We find the hairy dust bunnies of redemption for every past indiscretion sanctioned by big government. No need to worry about the other guy. No trespassing means nothing to the over-privileged. They always go exactly where they want. They don’t care for or about you. Everything can be explained away by elaborate hoaxes, falsehoods and cheap imitation. The best compliment is to impersonate the hatred of others. Arrogance is only exceeded by contempt for anyone that's not of the pale-face race.

These obnoxious white folks need to check themselves. No manners and even worse etiquette. They can dish it out but they can’t take the heat. Shed the thin veil of the conscious world, embrace the abundant realm of sweet nothingness. That place where all is revealed when there's nothing to see. It still matters very little if you’re refused service because of the color of your skin or you work for some fearless leader of some hate-filled country. Erase everything you never needed. Let it all go falling away into the abyss of this moment. Where real and fake intersect the void to make a true world undone.

A messy bed in a once upon a lifetime land of sleepy nods. Awaken and close your eyes where all is visible. See the clear bright total darkness. Embrace night as sunrise; let air move you along daylight’s way to nowhere evenings. Drop me off at no place. You’ve been there before. Pick me up when you get anywhere. Forget everything to remember it all. A place to go after a long journey ends. At the beginning of everything you never wanted. Getting everything you wish for. Time stands alone, love of fellow creatures runs away on feet firmly planted in cement at the bottom of a lake. Head in the weeds. Fingers touch skin. A body in step with other running in the streets. The end’s ticking time bomb alarm clocks ringing in the ears of the dead. A revolution of one. To the courageous who have gone before us. We salute you.

When staring into space, see the inside of your empty head. Believe things make sense. Hold onto that bag full of air. Live the balloon life floating like you never dreamed before. Dream the life you never lived. Anger happily fills lofty heads with gassy illusions. Joyful delusions of a lost world. The miracle of your escape into a prison inside your heart’s desire. Where souls meet. Pick the lock on the cage of freedom. When thought tangles with reason there are no winners or losers. Victory ruins the spoils of war. Cell phones ringing in the pockets of the doomed. An extended stay in a dead motel. Something resembling truth stalks us.

Maybe we’ll get nasty. Bombarded with vagaries as if we’re all able to fulfil our hopeful desires and live long, happy lives. Not so easy with long foreboding days and sleepless nights worrying about the endless news of discord. Many believe it’s the Democrats at fault or the Republicans to blame. Even more believe their vote will make a difference. It’s time for hateful greedy old white men to take a seat in the back of this bus. Their ranks are growing.