We were about 225 miles from our destination in New Jersey. 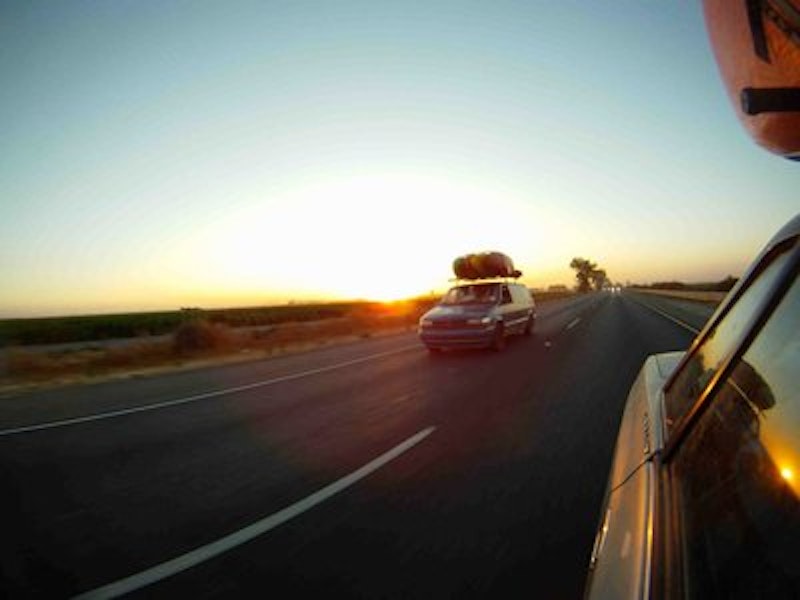 Daisy and I hightailed it out of Gainesville and made for Yulee, a speck of a town adjacent to Route 95 just south of the Georgia border. It’d been a tense day, and all we wanted to do was get out of Alachua County. I’ve been an outlaw all my life and done some pretty outrageous things, but no one has ever called the cops on me before. Another 24 hours in Gainesville and I would’ve been served with a warrant and homeless, all because a 54-year-old welfare-scamming biker wannabe without a bike freaked out over a few hostile text messages from a 61-year-old cripple. Cowardice is the signature characteristic of 21st-century America.

I got us a spectacular room at the Comfort Inn, the cleanest and most comfortable motel room I’ve had this side of Wyoming’s legendary Little America. We had pot. I scored us an 18-pack of Icehouse, and Daisy got a bunch of sliders from the Keystone next door. I ate two of them, my first meal in four days. We cracked open a couple of beers, got high, and settled in to watch the Weather Channel. The Weather Channel is my Valium. When all else has gone batshit crazy and unspeakable violence threatens at every turn, I find comfort in tornados and droughts, blizzards and monsoons, tidal waves and earthquakes. There’s a perfect synergy in beer, pot, and the Weather Channel. No matter what hideous eldritch crap may be going on in my life, the Weather Channel makes me feel lucky: at least I’m not in Oklahoma.

There was an ugly storm front hulking in across the Gulf states. The radar images looked as if the entire Gulf of Mexico was about to dump all over the Deep South. We intended to take it fairly easy getting to Jersey. It’s 922 miles from Gainesville to my cousin’s house in Cherry Hill, and we figured to do about 300 miles per day. Low stress and casual. This storm front added a certain frisson of risk. I was in no condition to drive, severely malnourished, anxiety-ridden, trembling, and not really capable of focusing. Daisy hates driving in the rain as much as I do. We figured to make it to South Of The Border, a truly demented 1950s-built theme park based on racist Mexican stereotypes containing a serviceable motel possessed of a uniquely kitschy character in Dillon, South Carolina, about 315 miles north on 95. With an early start, smooth traffic, and a little luck, we figured we could beat this evil weather action.

The next morning we took long showers, luxuriating in the magnificent water pressure and endless bounty of hot water and plush towels. I washed my hair for the first time since January. We availed ourselves of the free breakfast in the lobby, and hit the road at 10:30, a little late, but well ahead of the storm.

Route 95 North through Georgia ran smoother than a preacher’s belly. There were cops all over the highway, on motorcycles and in those new Dodge Chargers that law enforcement favors since Ford discontinued the Crown Vic P71. Daisy drives a P71. I drive a P71.

Daisy and I were pulling out of the parking lot one day at the main Postal Service facility in Gainesville, when she spotted an older and somewhat grizzled cop walking out to his Charger. This guy had definitely driven the Crown Vic. She had to know.

“How does the Charger compare to the Crown Vic?”

“Does it feel safe?”

95 North through Georgia was wide, with a cop in sight every 20 or so miles, as befits an Interstate. As we entered South Carolina, the highway narrowed to two lanes. The clouds began moving in ahead, still light, but steadily thickening. Underpaid and overtired truckers played leapfrog with sluggish RVs towing cars while rude kamikaze Quebecois abruptly and without rhyme or reason darted between the two lanes sans turn signals like hummingbirds with a death wish. It was the traffic equivalent of fingernails on a blackboard or a dentist’s drill.

It all came to a screeching halt about 40 miles south of Dillon, when the highway narrowed to one lane owing to construction on an long and ancient bridge. Numerous twatwaffles and asshats rode the shoulder to cut in front of the idling line, mostly bearing Quebecois tags. At the climactic moment of constriction, an SUV inhabited by two ancient wicked witches from Quebec attempted to cut Daisy off. Her nerves were shredded from the day’s mayhem by this time. “I’ve had it with these fucking Quebecois,” she said. “Fuck them and their fucking fag circus.” She rolled down her window and let them have it full blast as the final merge dripped like molasses in January.

“What the fuck do you think you’re doing? You rude stupid bitch.” They ignored her, staring straight ahead. She inched the P71 forward and over toward their SUV. They veered away, staring over at her with severe expressions of alarm. “FUCK YOU!”

The sky opened up as we finally pulled into South Of The Border; horrific torrential rain, thunder, Wrath-Of-God shit, as predicted. I checked us into a King’s Suite, back in a deserted wing of the motel. We unwound with a couple of beers from the Graceland cooler I’ve kept in the car since the year 2000, smoked some pot, went out for dinner, and picked up some beer, all without leaving the parking lot. Besides the utterly authentic retro 1950s aspect, the most appealing thing about South Of The Border is the convenience of having everything you might need right there, within easy walking distance.

North Carolina was two lanes again, but not as congested. Two lanes are completely inappropriate for a critical interstate highway in America in 2015. Passing Lumberton, North Carolina, is always a landmark moment for me. It’s the halfway point between Miami and NYC. Infer from that what you will as regards the informal pharmaceutical industry. Blue Velvet is and always will be one of my favorite movies. Within 18 months of that film’s release, a bunch of Lumberton cops got busted for ripping off drug dealers and mules passing through and reselling the drugs. I’ve often suspected David Lynch of possessing psychic powers.

Virginia blessed us with four lanes and a law enforcement presence. Throughout South and North Carolina, we hadn’t seen one cop, sheriff or state trooper. It seems that they don’t need the money they could collect enforcing the rampant violations on their shitty patch of interstate.

We made our way to Fredericksburg, Virginia, and hunkered down in an anonymous chain motel with no distinguishing characteristics, ate, got drunk and high, and watched Thor on the cable TV. We were about 225 miles from our destination in New Jersey. I’d eaten every day: a record for the last three months.

The next day’s jump to Cherry Hill was uneventful, a bright sunny day with sparse traffic, a refreshingly anticlimactic end to a largely white-knuckled thrill ride originating in isolation, fear, and physical decay in a Korean-war vintage quonset hut owned by grifters in the darkness on the edge of town in the relative paradise that is Gainesville, Florida.