A destination for shoppers from all over New York City. 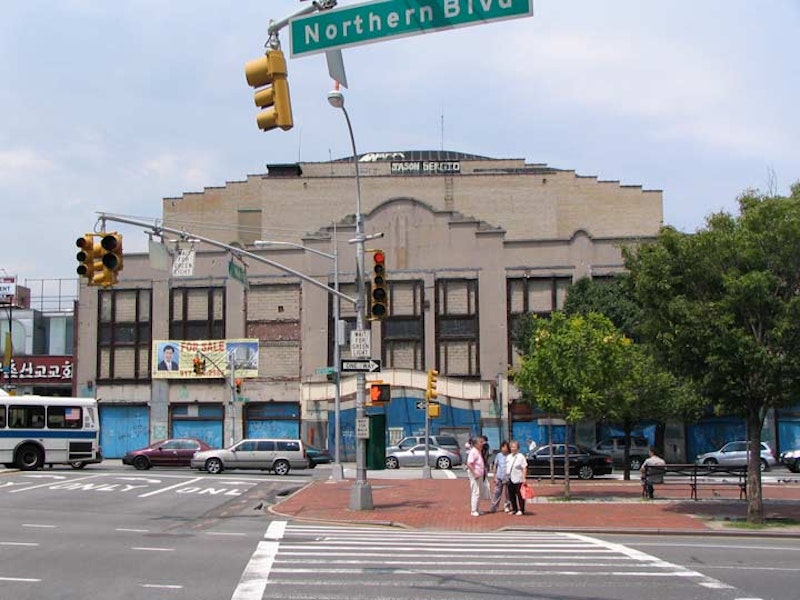 Since the mid-1600s, the heart of Flushing (named by early Dutch cartographers Vlissingen, later bowdlerized to Flushing by the settling Brits) has been the t-shaped intersection of the present Main St. and Northern Blvd. In its early years Flushing was a hotbed of religious conflict, as the New Netherland colony Director-General Peter Stuyvesant was intolerant of any other religion but the Dutch Reformed Church; the colonists’ burgeoning religious independence led to the creation of the Flushing Remonstrance, a display concerning which can be found at Flushing Library; and the travails of John Bowne, whose early-1660s home still stands on Bowne St.

In the colonial era, at the cross of the T was a longtime hostelry/tavern called the Flushing Hotel. Stagecoach service between Flushing and the Manhattan ferries began in 1802, running along Bridge St./Broadway/Northern Blvd., and traffic proceeding east and west was often in need of changing horses and feeding and watering them.

In 1928 the grand RKO Keith’s Theatre was constructed at the crossbar; until its shuttering in 1985 it was the doyenne of Main St., visible in most photographs and renderings looking north on Main St. during its six decades of showbiz dominance. First-run movies premiered here, and live-action comedy and song from big names like Bob Hope and Bing Crosby were presented as well.

Since closing, it’s changed hands from owner to owner, and has not fared well under any of them. Its future is, as it has been since 1985, up in the air. 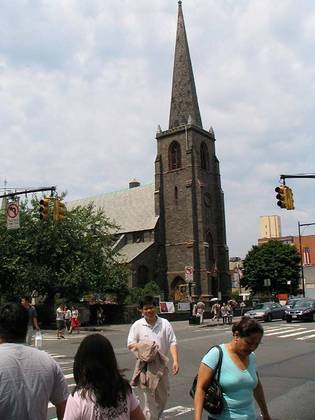 In 1853, Flushing, which was then already over 200 years old, was still a one-horse town. The only constant between then and now is the presence of St. George Episcopal Church, founded in 1702. The present church is the third on the site, constructed from 1853-54. St. George’s isn’t the oldest building in Flushing. Three buildings are older: the John Bowne House on Bowne Street (1662); the Old Quaker Meetinghouse (1694) and the Kingsland Homestead (1785).

Two plaques by the front door give some history and details of the historic Episcopalian church, including its charter granted by King George III in 1762 and vestryman Francis Lewis, signer of the Declaration of Independence from George III’s England and a future boulevard name. St. George’s churchyard bears stones with names now found on Queens maps, such as Lawrences, Pecks and Cornells, and some stones were placed as early as the 1780s. 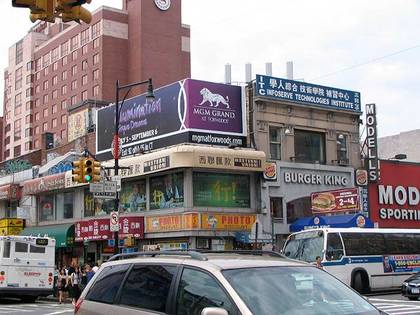 Today the intersection of Main St. and Roosevelt Ave. is one of the busiest and most congested in New York, and may be one of the busiest in the world as far as foot, auto and bus traffic. The 7 train has a terminal here, and the Long Island Rail Road stop brings yet more traffic here one block away. Immigrants from China, Vietnam and Korea have migrated to Flushing for nearly 30 years, turning what was once a moderately busy crossroads into a supercharged commercial strip. Restaurants abound as do chain drugstores, fast food places, as well as groceries and butchers selling Asian specialties found only in certain enclaves. The Sheraton Hotel has built a branch catering to those arriving from nearby LaGuardia Airport.

There has been a corner clock at what was originally the Bank of Manhattan office building on the northeast corner of Roosevelt and Main since its construction around 1930. 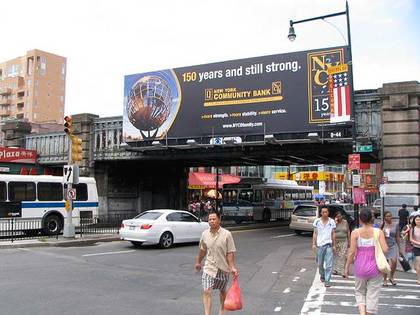 The Long Island Rail Road has had a presence in Flushing with two stops since the mid-1860s. There were two Flushing railroad stations: this one, Flushing Main Street and Flushing Bridge Street, on the Whitestone Branch and Northern Boulevard; it disappeared when the line was decommissioned in 1932. However, the station name has continued to carry the differentiating “Main Street” name.

The Caldor adjacent to the station on Main St. occupied a former Alexander’s department store. When Caldor went bankrupt the space remained empty for about 15 years before its current repurposing as the New World Mall. Long-neglected, the Metropolitan Transit Authority has begun improving the station, installing new station railings, lighting and elevators. However, a crossover spanning the tracks is also much needed, but the MTA isn’t budging on that. 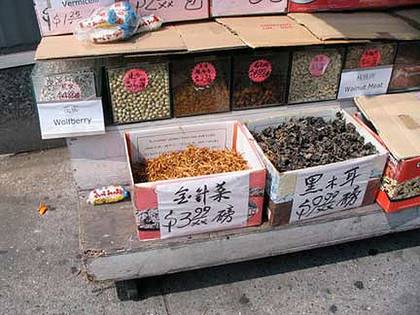 Main St. has to be counted as one of the busiest shopping districts in New York, as its Asian grocery markets and stalls, stores selling Far Eastern healthcare items, and abundance of restaurants purveying specialties from various parts of east Asia make it a destination for shoppers from all over the metropolitan area. Above is just a small sampling showing goods that are difficult to obtain outside places such as Manhattan’s Chinatown, Brooklyn’s Sunset Park or Main St. 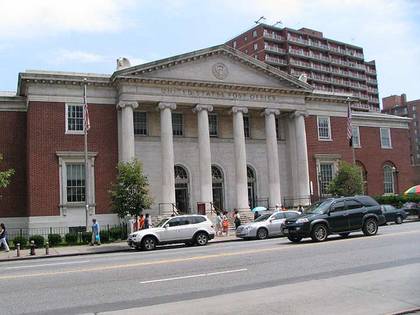 As post-office architecture goes, Colonial Revival is a popular style—Flushing’s majestic post-office building, Main St. and Sanford Ave., with its pediment and six Ionic columns, is similar to post offices in Hunters Point and also in St. George, Staten Island. It was constructed from 1932 to 1934 and designed by Dwight James Baum and partner William W. Knowles. 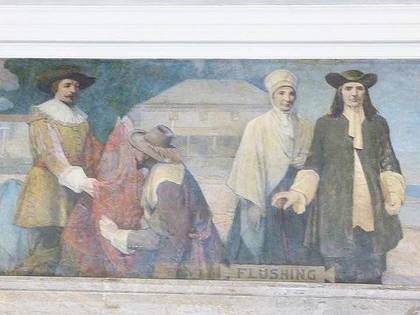 The main attraction in Flushing, P.O., though, are the wall murals created by Vincent Aderente (1880-1941), an immigrant (at age six) from Naples, Italy, who studied at the Art Students League and became an assistant to muralist Edwin Blashfield. His commissions besides the Flushing P.O. are found in Brooklyn’s Kings County Hospital, Queens County Court House, Denver Mint, Detroit Public Library and, until it was demolished, the Long Island Savings Bank. The bank was demolished after the mural was stolen, but a copy turned up and has been hung in the Quinn Funeral Home on Broadway and 36th St. in LIC.

The murals are arranged on the upper walls of the P.O. above the service windows and boxes, and depict Queens neighborhoods surrounding Flushing on the east and west. Some murals, such as Flushing’s, show extant historic buildings, including the Quaker Meeting House that still stands on Northern Blvd. and Linden Pl. The mural shows Dutch traders and a man (possibly John Bowne, a Brit who originated the concept of religious freedom in 1620s Flushing) and his wife.

—Kevin Walsh is the webmaster of the award-winning Forgotten NY and the author of Forgotten New York and, with the Greater Astoria Historical Society, Forgotten Queens.