When fancy writing is good writing. 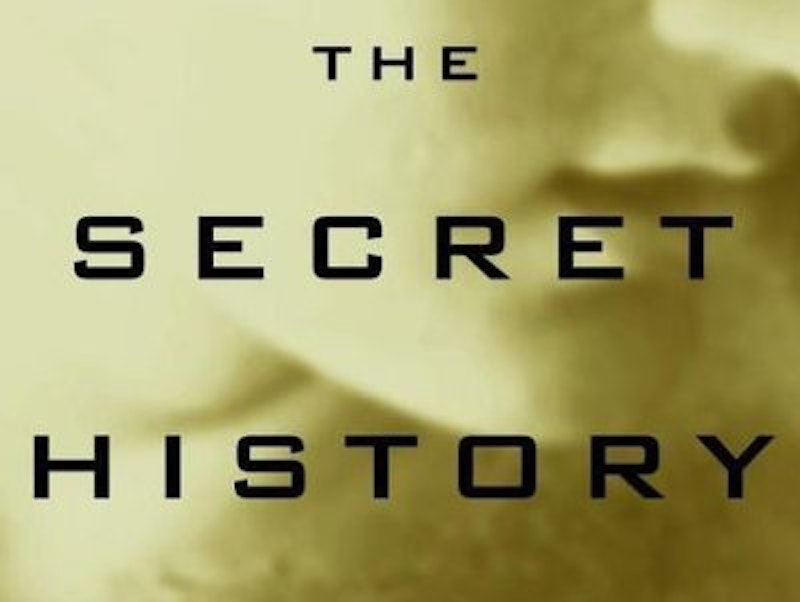 “The yolk quivered, gently, in its bloody bath of ketchup and Worcestershire. ‘I don’t want it,’ I said, and pushed it back.” There we have a quintessential pair of sentences from Donna Tartt’s The Secret History. An acquaintance of mine once threw that book across a room, possibly because he’d read the bit just quoted. It occurs 90 or so pages into the novel, a page after a rhapsody about vanished times spent with the narrator’s highly special friends: “What shall I tell you? About the Saturday in December that Bunny ran around the house at five in the morning, yelling ‘First snow!’ and pouncing on our beds? Or the time Camilla tried to teach me the box step; or the time,” and so on.

The fellow was against exquisite rich kids, and the yolk sentence is undeniably exquisite, a slim jewel box of a sentence. “Gently” is an adverb, why set it about with commas? Because otherwise the mouth would have to gallop through the sentence, turn it into a mere line-up of words. Still, grammatically the commas do nothing. This is a violation of the hard-nosed ethos by which bookish kids are schooled to produce disciplined adult prose (“Kill your darlings,” “When in doubt, leave it out,” and don’t get hung up on sound). So is the use of “bath,” I suppose, when describing ketchup, or even ketchup and Worcestershire. Who says “a bath of”? Perhaps a menu in a trying-too-hard restaurant.

What we have here are the earmarks of that dread thing known as Rye-tang, otherwise called Writing. Except that the sentence works and so does The Secret History. This is a matter of opinion, but my opinion is reinforced by five highly enjoyable readings of the same novel, something I’ve achieved with no other book since The Egypt Game by Zilpha Keatley Snyder, a YA title that helped me through fourth grade. I find that The Secret History goes down very smooth, an effect that won’t be achieved if a book’s prose is loaded with look-at-me misfires. When Donna Tartt, then 28, published The Secret History, she had loaded it with look-at-me moments that fired on cue.

Elegance doesn’t come around often. In the meantime we know the phenomenon by its imitations. Naturally our misgivings build up. Then elegance arrives and our misgivings turn sideways and vanish. Look at that leather, look at that stitching. History is a high-class production from commas to themes to cryptic ending (dream sequence, final words: “He turned from me and walked away. I watched his back receding down the long, gleaming hall”) to ingeniously observed setting to distinctive characters to wickedly designed plot. Fudging of execution is kept to a level that seems inhumanly low. Therefore, the book springs about one, or me, like a trap. Sentence by sentence, chapter by chapter, I can’t stop reading it until it’s done.

“The yolk quivered, gently, in its bloody bath of ketchup and Worcestershire.” Yes, without the commas the sentence sounds flat as a trampled lawn. Therefore, the commas are pegs holding together a noise contraption. But they’re more than that. The pause after “quivered” mimics the queasy deliberation, the unhappy focus, with which the narrator (who’s fighting a hangover) realizes that the drink doesn’t hold still. I’ll defend “bath” too. In this context it sounds artificial, but the pick-me-up looks unnatural to the narrator. Very often, when we want to pick apart something, we turn formal (“Might I point out,” etc.). From this height we dissect. “Bath” isn’t just a handy but pinky-out way to avoid “in a lot of ketchup and Worcestershire.” The word signals the distaste the narrator feels. The word also reinforces this distaste: after all, a yolk in a bloody bath is a crime scene.

“‘I don’t want it,’ I said, and pushed it back.” It’s typical of History that the yolk sentence’s rhythm and meaning give rise so neatly to the sentence that follows. Sub-text is flipped to become text; meanwhile, the enforced mini-hush of “gently” converts into a yelp. This miniature eruption (“I don’t want it”) also permits the throat to re-set after negotiating the yolk sentence’s rather narrow straits. I’ll note that the content and vocabulary of the two sentences suit the narrator down to the ground—he’s a boy of finely tuned taste and chronic disdain—and that blood and baths and the eruption of the hidden are about to play recurring parts in the narrative. Here we’ve had a little coming attraction without knowing it.

Fancy prose written by a smarter-than-thou youth ought to be bad prose. But it isn’t always. In The Secret History it’s splendid, and so is everything else about History. If you can stand rich kids at all, pick the book off the floor and give it a try.