The perils of Little League. 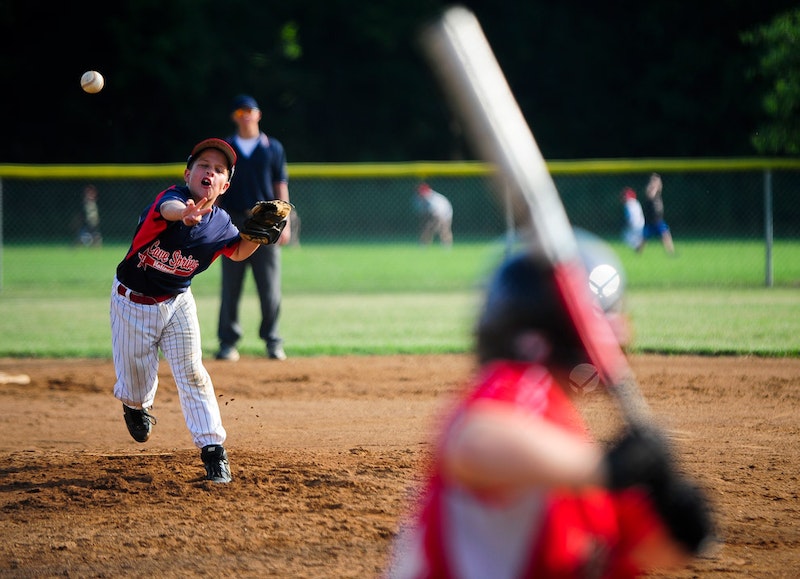 My friend Jack was hit on the shoulder during his turn at the plate, and jogged to first base with a stoic look on his face. Actually, he was probably in shock. He wasn’t crying because this was a pain beyond tears, a pain that manifests itself in your entire body, until all you can do is collapse and lay perfectly still and wait for the agony to consume you whole.

I knew this wasn’t true. I was hit a ton of times. Objectively, I knew that it only hurt for a couple of seconds. It just stings a bit, that’s all. But that did nothing for my fear. Even as a nine-year-old I could recognize that it was irrational, but sometimes the irrational fears are the hardest to kick.

Of course my turn at bat came next. What is this strange society, where your parents, coaches and friends cheer you on to go face your executioner? We didn’t play baseball: we played Russian roulette, gambling with our lives to disprove the statistical improbability of actually getting a hit.

I had no chance of getting a hit anyways because I never swung. It was easier to keep your eye on the ball if you didn’t have to think about swinging a heavy aluminum bat, let alone make contact with a sphere flying towards you at what seemed like 90 miles per hour.

I approached the plate. Approached is the accurate word because I stood as far away from it as possible. The umpire had to gently push me into the batter’s box. One of three things could happen: I could strike out looking, hope for a walk, or get beaned. The pitcher was some ‘roided-up 13-year-old who was only allowed to play with the nines and 10s because he had red hair and was always teased about it. He needed an outlet to release his frustration, so he begged his father, the commissioner of Baltimore’s Roland Park Little League, to allow him to play two age groups below his level. Or at least that’s what I assumed.

The kid was wild. He threw four straight balls and I chucked my bat to the dugout and jogged to first base. “I wasn’t hit,” I thought. “Great. Now it just means I’m gonna get hit the next time.” I knew about statistics.

Each game was only seven innings (hallelujah!), and it ended with two walks and a strikeout (on three pitches). I often needled my coach about being a designated fielder. He probably would have liked that, as I always volunteered to play right field, the area where no balls are ever hit, and he was one of those hyper-competitive, vicariously-living-through-his-son type of dads. But the rulebook didn’t permit it. Oh well.

With the last out came relief: I didn’t have to hit again. The game ended without fanfare. We could’ve won or lost, I didn’t really care all that much. I said goodbye to my friends. They were all cool and I liked the camaraderie. And then there were the hot dogs. My reward. Every post-game meal was a hot dog. Sometimes they’d even top it with chili. So what if I thought I was facing my death every time I stepped up to the plate? I just spent a mostly fun morning with my Dad and ate three hot dogs. Worth it.