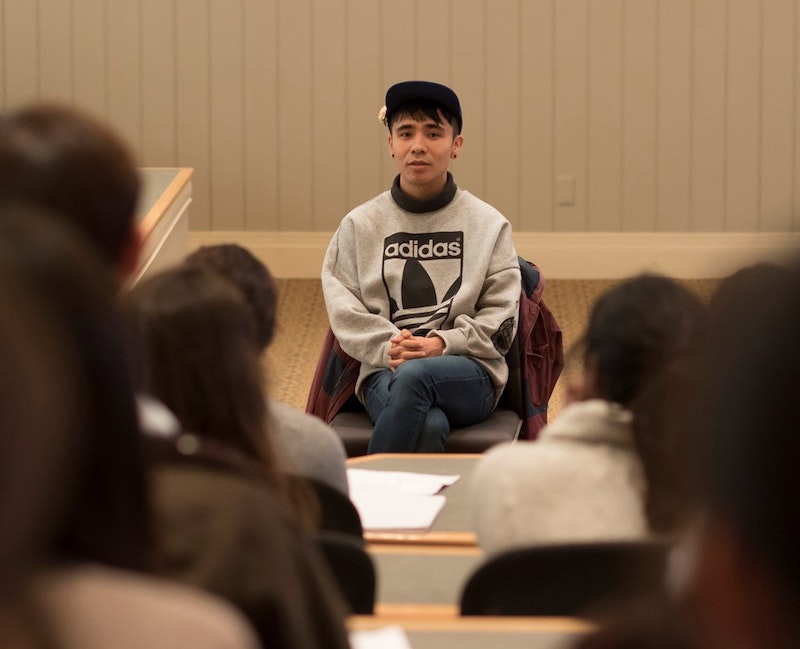 Vuong invites readers to scavenge for the love lyrics hidden in an experience of nature like a fish inside a fish, a double catch hauled out of the water. “Ropes & ropes…/How quickly the animal/empties,” the narrator observes. The associations I draw from these lines are overwhelming: sexual climax, the gross effects of hanging by a rope, or simply caught fish giving up water, blood, or prey.

The abrupt, bodily entanglement and disentanglement in the extended fishing metaphor receive visual echoes in the printing of lines that either hook ones below or rip apart in the middle of the page. The narrator plays catch and release with the body of a relational you, defining its proximity variously in the action. “We’re alone again/with spent mouths./Two trout gasping/on a June shore.” This is followed by, “Side by side, I see/what I came for, behind/your iris: a tiny mirror.” The poem explores how relationships transform, especially when violently reaching a climax or anti-climax. The rush of the extinguishing moment, when anticipation seizes, with a “rattle” or “twitch,” some defining experience, reveals the naked tango between life and death. The poetry of love lives and dies in the seizure-like ecstasy of orgasm: “I stare/into its silver syllable/where a fish with my face/twitches once/then gones.” It’s melodramatic but it rings true to the nature of sex.

I find Vuong’s poem a brilliant successor to D. H. Lawrence’s “Tortoise Shout”—another nature lover’s lament. Lawrence writes, “Tortoise in extremis./Why were we crucified into sex?/Why were we not left rounded off, and finished in ourselves,/As we began,/As he certainly began, so perfectly alone?/A far, was-it-audible scream,/Or did it sound on the plasm direct?” No matter how they make metaphors of the animal kingdom, these poems fixate on the tiny divisions between innocence and experience. In similar ways, the two poems temper the thrills of life by warning us of the burdens of experience and maturation. Vuong powerfully closes his poem with, “The fisherman/suddenly a boy/with too much to carry.” The reduction of the glory of the big catch is exactly why I love this poem as a work of contemporary, critical eroticism. Abundance of experience challenges personal growth. Matched up against the demands of life, is one really an adult or still a child? The poem leaves readers stranded with intimate knowledge of the metaphor but no way to carry it all home.