Eat or Be Eaten

That flag has got to go. 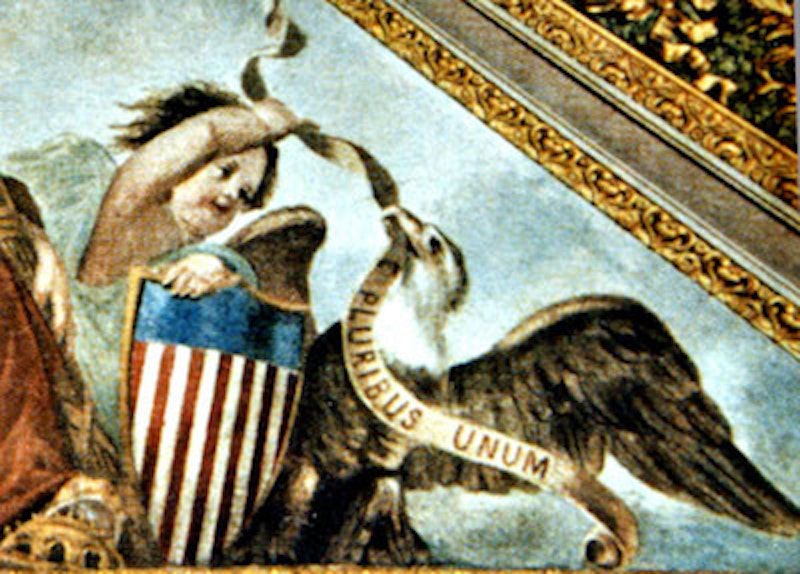 Get rid of that creepy “E Pluribus Unum” motto. It reeks of fascism, and this multi-lingual crap must stop. We speak English in this country. I suggest we change it to something more honest: “We Cheat Tourists And Drunks” sounds about right. “Eat Or Be Eaten” is perfect.

“In God We Trust” has got to go. The question: which God? Genocidal Jehovah, murderous Moloch, or the crawling chaos of Cthulhu? Mickey Mouse, perhaps? Given that The X-Files looks more like a documentary series every day, “Trust No One” is appropriate. “Watch Your Back” is pretty good advice, that could work. “Beware Of Pickpockets And Loose Women” is cumbersome, but it has a nice antique ring to it. “Death From Above” is already taken.

Our National Anthem sucks, and everybody knows it. The tune is an awful old drinking song that can hardly be sung, and the lyrics are ghastly. The Juggalos are a fine example of multi-racial social harmony at its best. Insane Clown Posse’s exquisite Let’s Go All The Way would be perfect. It expresses the essence of America perfectly.

That flag has got to go. It’s way too derivative of the flag of the British East India Company and lacks symmetry. Either hoist the Jolly Roger or stick the Great Seal on it. The Stars And Stripes are too garish, it’s an offense to the eyes.

Move the Capitol to Las Vegas. Force all members of Congress to appear in drag at all times. Ethnic-specific Congressional groups must appear in the stereotypical racist image of whatever group they represent, i.e., Black Caucus members in minstrel drag, Hispanic/Latino members in sombreros and serapes, Jewish members in Hasidic garb, and Bible Belt white guys in KKK robes. If any member chooses to opt out, he or she has the option of appearing in clown drag at all times.

Change the name of the Department Of Defense to “Fuck Shit Up.” How on earth does one misplace $21 trillion in 17 years?

Put a one percent tax on all equity transactions. A penny on every dollar in flow on Wall Street ain’t gonna hurt them one bit. Let them whine and cry, life goes on. They have their cocaine and hookers to console them.

Put a $10,000 bounty on the heads of members of MS-13. It’s not like they’re hard to identify, what with all those scary-ass facial tattoos and all. If well-armed American citizens could get 10 grand a pop for MS-13 heads, that gang would be gone in the time it takes homeboy to loot a Nike outlet.

Draft Dean Kamen for president. He’s clearly the smartest man in America. I’m serious about this.

These suggestions could put an end to our decadent Weimar Republic replica and bring forth a vigorous new national spirit, a unified people, and an honest presentation of the hope and glory that America represents to people worldwide. Truth’s more important than peace.