A would-be generational landmark of the early-1990s. 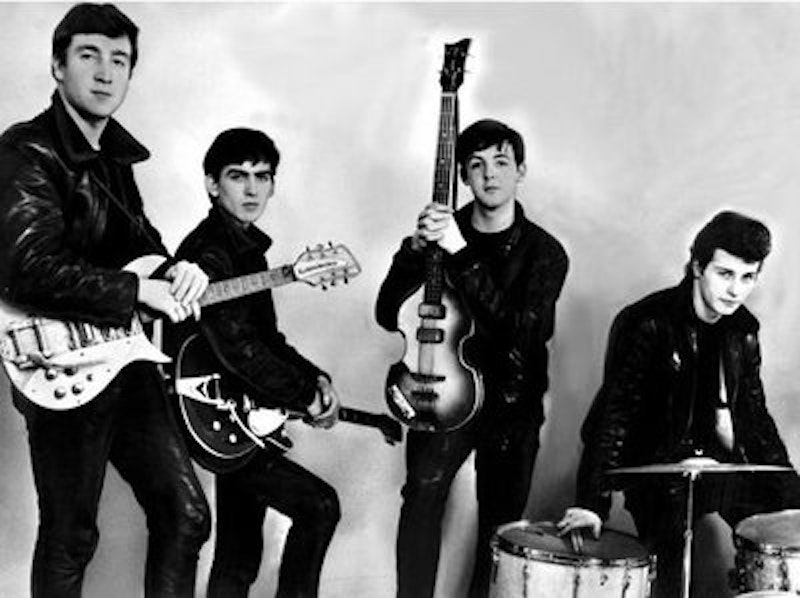 As a generational statement, this film was bound to happen. That being said, Christian Slater was not an inspired choice for John Lennon. Luke Perry really shouldn’t have been cast as Stu Sutcliffe. Brian Austin Green, hair caked in black dye, could pass as George Harrison, but only because the movie’s George said close to nothing. Steve Zahn did a lot with the small role of Bill Harry, and Keanu Reeves clicked as Pete Best, though that last was a case of a persona being heaven-sent for a part. River Phoenix proved admirable as Paul McCartney, but the catch here was that his accent—consistently Liverpool—stood out against the others’.

Gus Van Sant hasn’t disavowed Three Cool Cats, or not quite, but he’s on record as slagging the studio’s cut of the film. Ninety-three minutes was a half hour too short; the result was that supporting players and their subplots jumped in and out of view. But if the timing of a release were everything, the movie would have worked. Three Cool Cats, released in March 1993, fell at a good time of year and at the peak of a trend. Late winter and early spring can do nice work for breakout word-of-mouth films aimed at the teen market. And 1993, from a buzz point of view, was a good time for Generation X.

Something big had gone down: the baby boomers, who’d always been young, were now not young. Instead these other people were, and the baby boomers couldn’t stop goggling. Envious and aghast, they pasted those kids all over the media. The story told by magazines, TV, movies, and lit was that the newcomers had stalled out in childhood. Sleepy-eyed in their underwear, they now pawed each other and snuffled about long-ago emotional mishaps.

Not a flattering picture, but being fussed over is still being fussed over, and the media depictions did grant the kids generous cheekbones. They also received a rock to throw at their parents. Gen X was the first crop of youth to have been produced (largely) by the baby boomers. The 1960s generation had gone on its various jaunts, the storyline said, and little children had grown up coping with the fall-out. Now here were the results. Look at what our narcissism has wrought, the boomers told each other.

It took a while for opinion to form about the above. In the meantime, just because there was a new generation on hand, Hollywood got youthful by producing lots of medium-budget films that starred twentysomething actors. For example, the gangster film (Mobsters) and the Western (Young Guns) were given supposedly fresh new identities when under-30 line-ups played big shots from history. Bugsy Siegel was Richard Grieco, Billy the Kid was Emilio Estevez, and so on.

Then the 1990s settled in and Gen X found its name. At that point Three Cool Cats was shot and released. There, flexing their cheekbones and smoldering over leather, were the young guns prepared to play the baby boomers’ founding gods. Cats focused on the narcissism and emotional brutality of the magic three, the boys who’d become the Beatles we know. As one of the group’s early and transient drummers told a biographer, “And didn’t they used to send up that other lad, Stuart! Oh, they never left off teasing him.” Those are the Beatles on view here, in a movie about the glamour and intimate pleasure of cruelty.

The hazing of Sutcliffe and the dumping of Best take up most of the film’s theatrical version, though enough other elements come bounding in to maintain confusion. The director’s cut, released on DVD in 2003, doesn’t connect that many of the hanging dots, but it does show Pete and Stu nurturing a friendship in their underwear while rain beats outside a Hamburg flophouse. The two touch each other’s muscles as if making sure they haven’t been misplaced, and they talk about childhood’s rougher side. “Me dad,” says an impassive Keanu Reeves. “Oot the door. He were, I dunno, so grim standing there. Like he were a giant or summut. And then… oot the door. We never saw him again.” It develops that this memory is why Pete Best hits his drums so hard. When by himself he does this shirtless, and at one point he’s missing a shoe.

The atmosphere in the film is of a boiling, skinny-thewed, greasy-haired, endless animation that scuffles and wriggles into outbreaks of musical glory. So young they’re half-animal, the whelps are magnificent because they’re whelps. John Lennon, or Christian Slater, purrs a speech to oldsters of the future. “I’ll tell you one thing,” he says, taking a lit cigarette from Paul. “Thirty years from now, if the songs we sing are being kept prisoner by some fat-assed suburbanites with their air conditioning and their stereo equipment—well, I hope I get shot, that’s all. Shoot me in the back and let me die.”

Callista Flockhart’s turn as Cynthia Lennon, even with her scenes restored in the DVD cut, doesn’t make an impression. Bridget Fonda is all right as Astrid Kirchherr, but probably cost too much. Stuart Varney is a surprising but effective Horst Fascher.