Fiction: They kept the creature alive simply to feed off its parts. 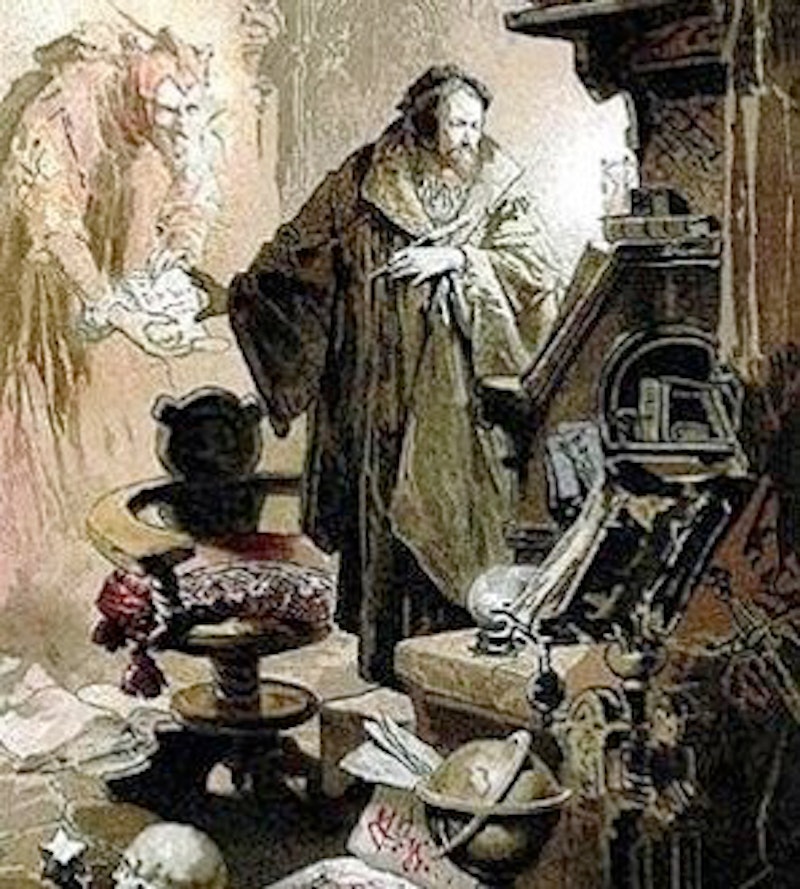 Dr. Maltrant Grave solved crimes in a Germany of long ago, a civilization that considered itself especially modern and is now a forgotten byway. Germany had an emperor and airships, and its navy nosed about the seas as far as the South Pacific. Back home trains clanged across iron-gray plains and cut through cold northern winds. All parts of Germany, “that magnificent Africa at Europe's core,” lay open to visitors from the nation's cosmopolitan center. The warm lights of Berlin glowed behind the traveler and were lost; the night air hurtled past; finally the bare spars of a town came into view. The traveler descended onto the station—planks raked by winds pushed from the Bremen or Poland or the Alps—and sized up the scene of his new mystery.

That was one kind of set-up for Dr. Maltrant Grave. But he also worked in Berlin and the big cities. In the boondocks he found cult murders and imprisoned heirs and unsuspected survivals from man's prehistory. In the great cities he found society poisoners and laboratory automatons and bizarre visitors from the world all over, the newly available globe and its untracked reaches. In either case he trained his smoked-glass goggles, necessary for him to cope with ordinary light, and canted his long form forward. On the ground lay the expertly gutted corpse of a pig with a Sanskrit letter carved in its hide, or a gray-faced child's corpse in a man's expensive evening wear, or the severed leg of what was apparently a female man-wolf.

The Doctor's companion and chronicler was Count Aloysius (“Kim-Kim”) Grattenburg von Kunft Welltänschaug, a moneyed bachelor well thought of in Berlin's sporting circles. The lean-flanked ex-officer (“handy with sword or gun, and an inveterate rider”) darted forward when action was called for. Steel flashed, “gun powder spread its acrid cloud.” The Doctor surveyed the resulting scene. “It may happen,” he intoned in his muffled, removed tenor, “that desire, unmediated by practical expediency, shall reify itself ... exactly thus.” The sporting Count, more shaken than his comrade, barked out, “Himmel! And to think they kept generations chained below!” Or “And all the while she thought her child was a changeling!” Or “They kept the creature alive simply to feed off its parts!”

On the floor lay a tangled mess of culprit and victim, for it always seemed that the innocent did not escape the wrath visited upon their tormentors. That was the nature of things, a nature hinted at by Dr. Grave's intoned observations and the Count's barked exclamations. Something fundamental had been jerked awry and now the consequences had fallen in a general crash. The human cast of the drama lay with their limbs at angles and their faces damaged. Only the visitors and some supernumeraries—an innocent niece, a hardworking young nephew—stood by to inherit the scene.

The young Count escorted the Doctor back to the laboratory that Grave made his home. “I'll never know how you calculated the miserable woman's guilt,” the Count said. The Doctor's reply came from behind the muffler that warmed his narrow throat; his eyes, behind their smoked glass, could not be seen. “Logic is planar,” the Doctor said, “and human existence not nearly as much. In that conundrum lie all the answers I can find.” He warmed his hands, still gloved, at his laboratory's trim black stove, and then moved with decisive tread to the box of switches fixed to the wall. The room was about to be plunged into the inverted, infrared light—all the Doctor could bear without his glasses. The young Count excused himself, words dying in his throat as he sensed the distance his colleague now retreated to.

In the hallway, drawing on his gloves, the Count smiled briefly. His comrade guaranteed encounters with the unacknowledged far corners of human existence. But his comrade lived in one such corner, and the Count's visits there left a chill that crept away only when a fire at the Falkenburg Club danced just beyond his slipper toes and he drove his pen across creamy pages of the Club stationery, getting down for his readers the latest chronicle of that sapient detective and freak product of the modern world, his colleague Dr. Maltrant Grave, the thinker without a face.