God help me on the day this secret group doesn't meet anymore. 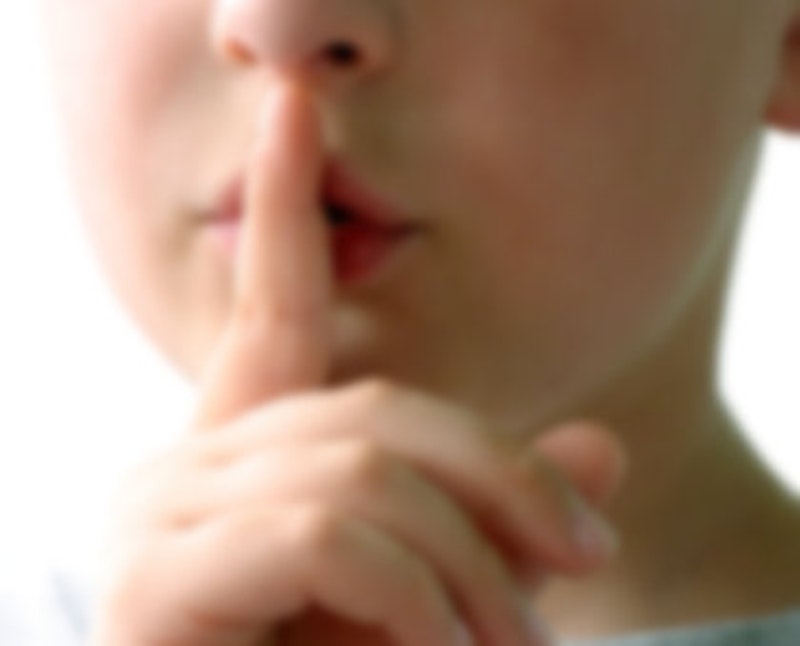 My eight-year-old son and I have this silly tradition on some days. It started because I keep a bag of individual wrapped chocolate covered cherries next to my bed. They’re wrapped up inside an innocuous-looking pharmacy bag, so they look like the bag that holds my Ativan and are therefore camouflaged in the nightstand clutter. When I pick up my monthly prescription at the pharmacy, I always buy some of the cherries. They’re a quarter apiece. That way, if I’ve had a crummy day or didn’t eat dessert, there’s a tiny treat always available in close proximity to my good drugs and my comfy pillow. Creature comforts, all in a row.

One day a few months ago, my son was in the little cave clubhouse he made for himself in my bedroom and I went to get a chocolate covered cherry and offered him one. I told him it was a super secret bag of cherries that no one knew about, so he couldn’t tell his three sisters or dad or anyone where they are hidden, and he couldn’t ever go into the bag and get one because I always know how many are left. His eyes were wide, like this was some sort of secret adult ritual he was being invited to. He nodded in agreement and ate the cherry, pressing the foil wrapper into a tiny ball and handing it back, as though he didn’t want to be responsible for the evidence.

A few days later, after making a point of checking the door to my room to see if anyone was coming, he climbed into my bed and whispered in my ear, asking if we were having chocolate covered cherries tonight. I solemnly handed him one, taking one for myself, rolling up the bag and tucking it back into its “disguised as mommy’s little helper meds” bag on the nightstand. He held up his one finger in the universal “sshh” sign.

I’d inadvertently started a club. He doesn’t run up and ask me every night, and I’m glad it isn’t an obligation. It’s just taken on “special treat” status—sometimes I offer, sometimes he asks, sometimes we both forget. Every once in awhile, if we’re in the kitchen, he’ll give an eyebrows-raised questioning glance, pointing toward the ceiling to silently ask if we’ll be having chocolate covered cherries tonight. I nod quietly, he makes the “sshh” gesture and nods back. In the bedroom, if I point to the cherry bag and raise my eyebrows, he always goes through the tiptoe ritual of checking to see if anyone’s coming.

As the youngest child and only boy, he’s the little prince. I don’t apologize that he’s my favorite, because it’s only fair I wouldn’t pick a favorite from among his three sisters, who all eye-rollingly smirk about his mama’s boy status. They all love him tons, so they don’t usually complain. He brings me coffee in bed in the morning, and when his dad is out of town for work, he still sleeps with me. I know he’s too old for that but when I asked the pediatrician, she said it was fine as long as “both of you still wanted to.” I know that means eventually he’ll be bigger and won’t want to, and the thought makes my throat clench with terror. I can barely accept that he isn’t still in kindergarten anymore, much less that he’ll ever be in middle school.

When talking to moms of teen boys, I ask what age he’ll stop being the sweetest thing in the world, the kid who asks how my day was or notices if I’m tired. If they’re a cool mom, they don’t give me the dreaded “you just wait” speech about teenagers—they know the love affair because they’ve had it, and they assure me that even their teenage sons still curl up in bed once in awhile and read with them.

My oldest daughter will soon be 20, so I don’t need to be reminded how the years fly by. It’ll be soon enough that my son has much bigger problems than whether we’re having a chocolate covered cherry tonight. Just next week, basketball starts and in the spring, he’ll be too busy talking about how his baseball game went, grabbing a shower, and maybe he’ll start to forget about it. But for now, I’m very thankful for the small moments that make up our tiny, secret chocolate covered cherry club.