Down a Sandy Driveway

When she pulled, the screen door opened. 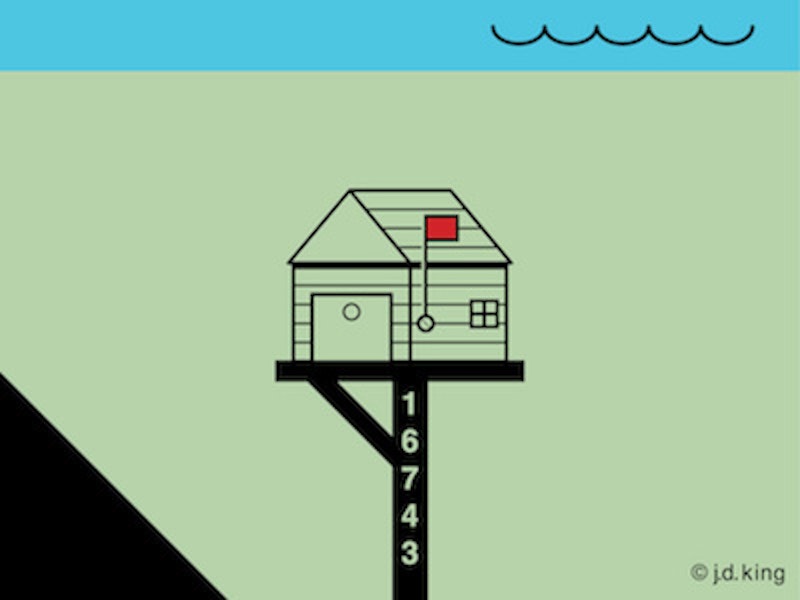 It caught her eye, made her brake, that mailbox: a little log cabin, its red flag at attention, practically saluting her. Setting down her Schwinn, as metallic-blue as her eyes, she walked over, opened the box, pulled out a letter. From a pocket of her khaki shorts, Tammi produced a nickel-plated lighter, flipped it open, flicked, held the flame to a corner of the envelope. When the burning paper got too close to her fingertips, she let go, the smoking ash dropping to the roadside.

She led her bike by the handlebars down a sandy driveway to the house, a pre-fab log cabin: the mailbox all growed up. Too funny! On the right sat a black SUV with caramel panels, a tin of Skoal on the dash. The sign in the yard read: The Longs.

Up two steps, on the porch. The screen door was closed, but the real door was wide open. Peering in, blocking August noon sun with hands cupped to her temples, she could see the living room, the dining-area, sliding doors to a deck, Lake Kayuta beyond. She rapped her knuckles on the doorjamb. Nothing. She knocked hard. Still nothing.

When she pulled, the screen door opened.

In the living room, she said, "Hello!" Silence. She turned a radio on, then off, proceeded to nose around.

On the mantle, framed photos: perky mom and beefy dad with two young boys; a soldier in desert camo, boot on a Jeep's bumper; some old folks; everyone smiling for the camera. Looking around the living room, a flat-screen, a few books in a small bookcase, some magazines: People, Field & Stream, Us.

In the kitchen Tammi rummaged drawers, poked through cabinets, scouted the fridge, grabbed a bowl, a spoon, milk, and a sealed box of Trix. She opened the box roughly, like an animal, poured cereal into the bowl, then milk. Leaning against the sink, she ate. The kitchen smelled faintly of spices. She should've been nervous, anxious about someone coming home, but she wasn't. If need be, she'd feed them a story. People will buy anything. They want to believe.

After the snack, she wandered down the hall, into a bedroom on the left: bunk bed against one wall. Seeing a toy car on the floor, she crushed it under heel.

Next, the other bedroom, past the unmade bed to the dresser, she rooted about drawers. Stashed under dad's socks, some cash: three twenties, one ten, a five, four ones. She put the dough in the same pocket as her lighter. In another drawer, a loaded .38 revolver. She held it with both hands, mimed Hollywood action poses, yelling, "Pow! Pow! Pow!" before placing it atop the dresser.

Riffling through the bathroom medicine cabinet she found a treat: a half-dozen codeine tabs in a green bottle. She popped the container in her other pocket, along with the tube of coral lipstick she used to gesture a smile face on the mirror, an oversized version of the ones she drew in place of the dot over the "i" when signing a love-note.

(Sometimes Tammi sent love-notes to several guys at a time. It cracked her up. The lugs fell for that corny BS, even older lugs. Especially older lugs.)

Back in the bedroom, she kicked off her flip-flops, stripped off her t-shirt, bra, shorts, and panties. Before the mirror, she held her teacup breasts, one in each hand, admired herself, then snuggled into bed, fetal position under the covers, drifted into slumber, breathing the scent of Mama and Papa Whoever.

Twenty minutes later she rose, did some stretches, then snapped out 30 pushups. "I should join the Marines!" Prancing to the bathroom, she turned on the shower, adjusted the temp to nice-and-hot, and stepped in.

Water blasting, Tammi got off on the danger that, at any second, a stranger could burst in bellowing, "What the hell's going on!”

Squeaky clean, she hopped out. Not bothering with the mat or a towel, a large puddle spread across the tiles as shook semi-dry, like a dog, her whipping blonde hair splattering the walls. She sang, "Bompity-bomp! Just a mirage, that's all you are to me..." Tammi'd heard the song yesterday, at her mom's, and it stuck in her brain like bubblegum to the bottom of a sneaker.

In the living room, still undressed, she picked up yesterday's Observer-Dispatch, sat down, adding a wet spot to the couch while reading about Utica's latest murder trial.

Bored, she tossed the paper to the floor, went out onto the deck, placed her palms on the railing, leaned forward, saw the pier below, gazed across the lake, took a deep breath, held it and thought, "Lake life is the greatest! Especially during the week when no one's around..." She trotted around in a wide circle, head bowed and bobbing, spanking her pink bottom, mimicking a frisky race horse goaded by a jockey. The sun warmed her bare hide.

Returning to the fridge, Tammi rustled up some cheddar cheese, bread, and a jar of red peppers. She made a grilled cheese in a black iron skillet on the propane stove. At the dining-area table, the sandwich—with a leftover bag of Fritos, a can of Pepsi, and two homemade cupcakes—was a fine lunch, free of charge, thank you very much. Just as she finished, rubbing her flat but full belly, a motor boat approached, cut its engine. In the surrounding woods, birds chirped. She got up, stood behind the sliding glass door, and saw the family docking at the pier. Towheads jumped out, tying the boat to the landing, just like Pop taught 'em.

In the bedroom Tammi picked up the .38, clicked off the safety, padded back to the dining-area, slid the door open, strode out.

From the dock, a family looked up to see a naked young woman on their deck, her right hand on hip, her left hand pointing a pistol at them. She bellowed, "Think fast, suckers!"

Just before Tammi squeezed off the first round, the older of the two boys stared wide-eyed and thought, "Wow! She's beautiful!"