Histories cross and overlap and resonate. 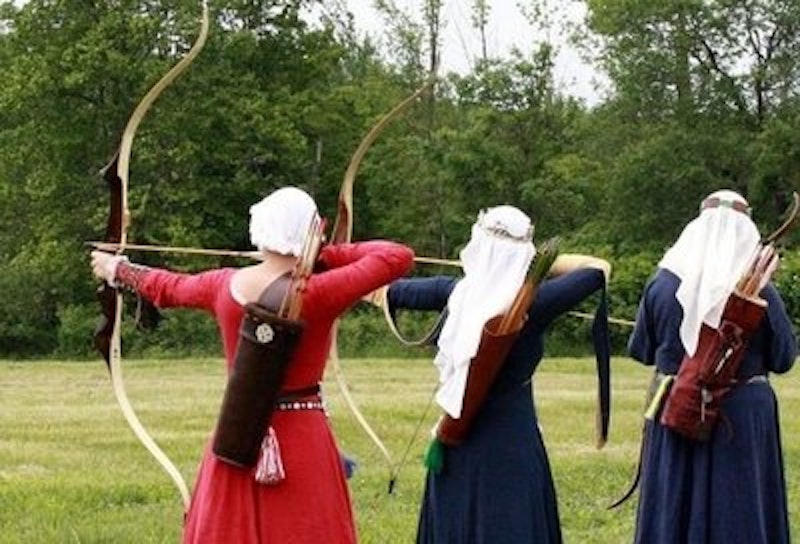 It was in May of 2016 that I got in a car with a 15th-century noblewoman of the Hanseatic League so she could drive me from my family’s cottage down to the local Canadian Legion Hall, where I would help set up an archery tournament.

Alke, an astrophysicist, was part of the Society For Creative Anachronism, a group of medieval re-enactors. SCA members create a persona from a specific time and place, research the persona’s historical background, then dress up in period-appropriate clothes and gear, often made by hand and using techniques from the era. SCA members in a given area gather regularly for events like Arts and Sciences meetings—gatherings to make and discuss historically appropriate crafts, from cooking to metalsmithing—and archery practice. And every so often they have more elaborate formal gatherings, feasts and coronations and tournaments. My girlfriend, Grace, was co-organizing an archery tournament in a softball field behind the Legion Hall in Philipsburg, Quebec.

I’d met Grace about 10 years earlier, at a book sale in Montreal, where we lived. A few years after that, she found a weekly archery practice held by the local SCA. She’d become fascinated with the maker culture of the SCA. Now she was a Norsewoman. I’d not been as drawn to the organization, originally founded in California decades ago and since grown into a worldwide network. I hadn’t the energy. But Grace had made herself dresses, and become a fair shot with a bow and arrow. That day in May she’d put together the first archery tournament in years for the Montreal branch of the SCA, in the small town of Philipsburg, about 50 miles south of the city.

By the time Alke and I got there that morning she’d been at work for a couple of hours with some of her other SCA friends. We joined them and helped set up, lugging hay bales from the side of the Legion Hall to the softball field at the back (by which effort I learned new sympathy for the medieval peasantry), helping lay down string to mark off a starting line, helping tape paper targets to the stacked bales. From the top of the wooded hill between the field and the Hall, the field looked to have become a set from a Robin Hood movie. It was immensely calming, in the morning sun, to see the green field speckled with golden hay like a heraldic shield, and see the bright colorful circles of the targets.

Outside the Legion Hall pennons attached to the railing snapped in the faint breeze. Inside thrones had been put up on the Hall’s little stage. Banners were hung here and there, among the medals and photographs and rifles that were the Legion’s own furnishings. The Royal Canadian Legion is a veterans’ organization, and Legion Halls are often one of the centers of a small town’s social life, a large room fit for wedding receptions and the birthday celebrations of great-grandparents. As in Philipsburg, a village on the shore of Lake Champlain.

Everything has a history; Philipsburg’s goes back to the late-18th century, when Loyalists fleeing the victorious traitors of the American Revolution founded the town just across the new border. Branches of my family had been living there for over 100 years. All my life I’d loved the family cottage, just a little way along a country highway from the Legion; much as Philipsburg’s at the border of Quebec and Vermont, at the border of the Saint Laurence River valley and the Green Mountains, that cottage felt like it dwelled on a border between the everyday world and some finer place. We all have magical places, maybe, and that’s mine, informed by years of reading Tolkien and E.R. Eddison on a hillside overlooking a valley of fields and trees.

Our individual histories fit into the larger patterns of world history. As I helped with the finishing touches of set-up for the tournament, more members of the Montreal SCA arrived, some of whom I knew, and they were in garb: the Legion hall, with its remembrances of past World Wars, began to fill with men and women out of times from the Dark Ages to the Renaissance oddly as though the fantasy paperbacks I’d read for decades had come to life. Histories, real and feigned, crossed.

From a rock overlooking the softball field I watched the tournament begin; I heard the bass thunk of bowstrings, the slap of arrows hitting targets. A car shelter had been set up as a pavilion, necessary in the growing heat. Mid-May in Canada brought heavy warmth, and I wondered about tournaments hundreds of years of ago in the south of France, with men in full armor. After a while I went back to the Legion hall, where ladies in dresses (and some ladies, who had male personae, in male garb) were holding dancing lessons. Medieval music played from an iMac. There had been some discussion about headgear, normally not allowed in the Legion, though the administrators were happy to make an exception for the ladies’ elaborate bonnets.

I remember now that the Tuesday before the tournament I’d been at the hall for some family gathering; a reception after a funeral of a distant relative. I remembered then the times I’d spent in the Legion, going back to childhood. I remembered dinners, when I was very young and my grandparents were alive, where you could buy special lottery tickets. I remembered having to leave my great-aunt and great-uncle’s 50th anniversary party because I was 16 and technically still too young to be on the premises when alcohol was served. I remembered talking with a family friend about a photograph on the wall, showing his unit from World War Two. I remembered months before the tournament, when Grace began talking with the Legion directors about renting the space, how one of the guys in charge said that his grandfather absolutely refused to talk about the things he’d seen and done in the War.

A little after seeing the medieval dancers, I’d fall into a discussion with a couple from northern Europe, I believe he was from the 15th century and she from the 14th. I was confused about where in France the man was from; I misheard Cruly as Cluny. We talked it out and it didn’t occur to me until much later there was a perfectly usable map of northern France behind me, showing the progress of the D-Day invasion.

The tournament went spectacularly well that day. In dresses and jerkins dyed period colors archers fired at targets, cursed, joked with each other, called out to watch for arrows that missed the target; for dead wood. All as archers must have done for centuries. I remember rows of escutcheons, hand-sized shield-shaped pieces of wood painted with heraldic designs, set up on a rack nearby. I remember also once a local rode an off-road motorbike too close to the range and a hold was called; otherwise the tournament went smoothly, though after rising early I was too tired to stick around for the feast in the evening.

Histories cross and overlap and resonate. If they also repeat at least the tragedy comes first and, at a long distance, is evoked only as farce. Weddings come after funerals. Caught up in the passing of moments it’s hard to see ourselves in the overlap of histories. And then, in discrete instants, it becomes obvious: the fantastic’s more real than we know, and the world’s a phantasmagoria of everything all at once, separated only, and that perhaps temporarily, by the mathematical contrivance of the fourth dimension.