No trip to Ocean City was complete without boardwalk food. 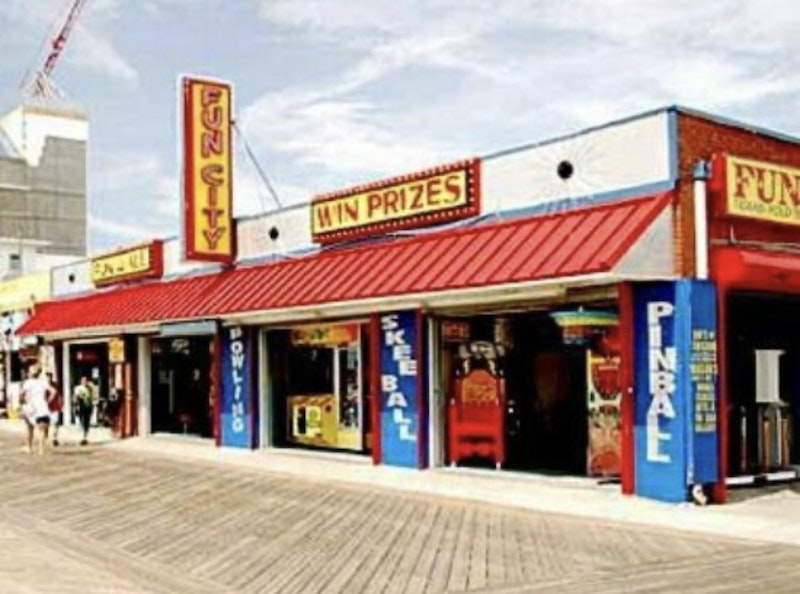 Summer officially began with our annual trip to Ocean City, MD. My grandparents, Mom, and I would get up early to pack our bags and get in the station wagon by nine a.m. for the three-hour trip. I sat in the back seat looking out the window and watched the familiar landscapes of the DC suburbs turn into the glistening Chesapeake Bay, the Eastern Shore’s empty fields, and finally, the Ocean City skyline. After we settled into our hotel room and stretched our legs, the first thing I’d do was beg Mom to take me to the arcades.

Ocean City’s arcades ranged from small rooms with a few game cabinets to palaces full of colored lights, electronic noise, and games. The hours—along with Mom’s quarters—would quickly disappear in a three-day binge session of skee-ball, air hockey, pinball, slot machines (with tickets replacing money), and old-school games, which were the best of all. Mom wanted to lie on the beach, but I just wanted to jump over Donkey Kong’s barrels all day.

Eventually Mom dragged me to the beach long enough so she could get some hint of a tan. Mornings were the best time to go; there were fewer people around, and the sand wasn’t hot yet. Mom and I can’t swim, so we’d stand near the shore and let the cold waves crash over our legs and bury our feet deep in the sand. Then the noon heat would arrive. It was time to wash the sand off our feet, get some pizza, and go back to the arcades again.

The t-shirt stores were like museums where every wall was covered with band logos and funny pictures. I didn’t understand some of the humor—one t-shirt depicted a cartoon character getting drunk and stoned at a party—but they were still mesmerizing. No trip to Ocean City was complete without boardwalk food: Fisher’s Popcorn, Thrasher’s Fries, and nonpareils from Candy Kitchen. As the sun set, Mom and I would eat them as we walked down the boardwalk while street musicians sang and an evangelist made sculptures of Jesus in the sand.

The last time I went to Ocean City was a decade ago. It wasn’t the same. The classic arcade games were gone except for one Ms. Pac-Man/Galaga cabinet; the rest were complicated games that were uncomfortably loud and cost a dollar to play. The t-shirt stores sold tacky ware with sexist slogans like “Cool story, babe, now go make me a sandwich,” and the few shirts I liked cost $40. The food was still good, but the magic was gone. Ocean City was now catering more to drunk college students than kids.

There’s a meme on Twitter that lists Ocean City as Maryland’s worst attraction, and a lot of Marylanders agree. Maybe Ocean City was always tacky, my childhood memories notwithstanding. I’ll go back there once the pandemic ends to see if anything has improved. If not, I can always stand on the shore, feel the cold waves, and remember when Ocean City was still magical.