An Air of Weirdness

Jeff Lemire’s graphic novel Frogcatchers is the product of a mid-life crisis. 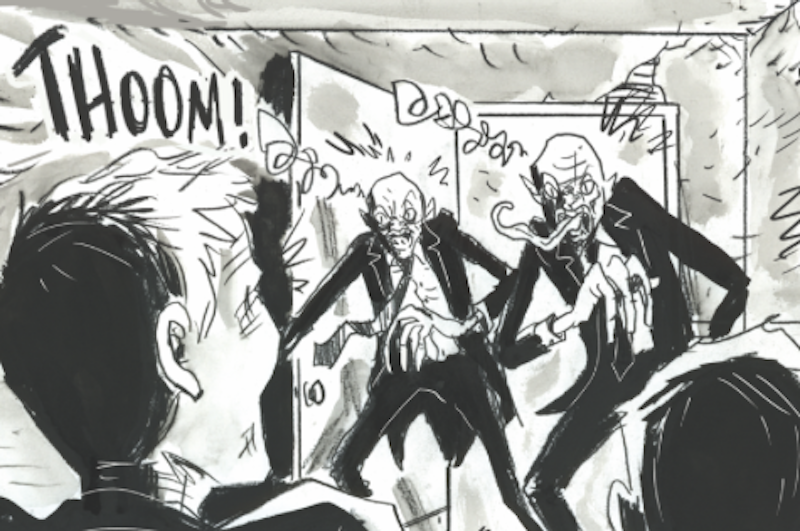 Jeff Lemire’s described his recent graphic novel Frogcatchers as the product of a mid-life crisis. In an interview with CBC Radio’s Tom Power, he said that as he approached 40, he found himself telling a story around aging anxieties. He created the book without a pre-written script, feeling his way through the tale as he drew it. The result, as he says, is “a meditation on getting old, memory and childhood.”

Lemire’s a talented and experienced comics creator. He wrote and drew the acclaimed series Essex County and Sweet Tooth, among others; his graphic novels include Roughneck and Secret Path, the latter a collaboration with Gord Downie. He’s also written a host of series for Marvel and DC, and won or been nominated for any number of comics awards. Frogcatchers’ no disappointment in its formal storytelling and its thematic approach, but its obviousness and simplicity mean it’s not likely to be considered one of his major works.

The story begins with a dream sequence, after which an old man wakes up in an empty hotel. He doesn’t remember how he got there, and mysteries abound, notably a frog nailed to the door of the room across the hall from his own. Then he finds a boy who warns him of danger lurking in the old place, and the two must try to escape the lurking threat within the building.

This is a quiet, relatively brief story. The air of weirdness is undercut by Lemire’s own narrative proficiency; he drops in images early on in the book that hint too strongly at what’s going on in the hotel. Accordingly, the place never develops a reality of its own. You know where everything’s going, and what kind of story you’re reading. When the characters explore the forbidden room that holds the greatest danger in the hotel, you know exactly what they’re going to find.

This sense of predictability is distinct from foreshadowing. Too much of the inevitable ending has been anticipated. Too much is obvious. Lemire’s clarity of appoach undoes the tension of the unknown.

Still, the technical storytelling of the book is genuinely strong. Much of the story’s told without words; there are no captions in the book, few sound effects, and minimal dialogue. Panels are large, with full-page or two-page images used frequently; the story flows, pulling us on at just the rate it wants. The ability to move the reader’s eye through the page at just the right speed is the mark of an excellent cartoonist, and Lemire has that power.

Lemire brings out character nicely in his art, in stances and body language. In his lead’s gauntness, the way his clothes are just a bit too big for him. In the haunted quality to his eyes. There’s a gestural quality to the drawing, and that looseness informs the characters. Every mark’s in the right place, but there’s nothing too studied. The scribbled lines of the old man’s face are like living things.

This is important because Lemire’s script doesn’t provide much insight into the characters. There’s a relatively long monologue toward the end of the book, giving us some background on the old man, but until then nothing about his past or who he is or what’s distinctive about him. We watch him work his way through a situation, and he doesn’t do anything unusual or jarring, nothing specific to who he is or how he thinks.

When we do finally get to the monologue it’s at an odd spot, structurally, slowing the action when you’d expect things to be speeding to the climax. You could call this dreamlike, and to an extent it is. The tone generally is one of the more intriguing aspects of the book, in the way it works with subtle paradoxes. Frogcatchers opens with a pastoral dream-sequence, then moves to the empty hotel with wide and spacious panels—and yet there are also odd images of enclosure: the main character shadowed by the outline of a window-frame, a margarine container holding two living frogs, a loud crash from behind a closed door. It’s not disturbing, not horrific, not really even unsettling, but it creates the sense of something unreal, of a self-contradictory place.

The problem is that is also creates an abiding sense of weightlessness. That, combined with the largely silent story and the storytelling approach Lemire’s taken, makes for an extremely quick read. The mystery barely seems to have been introduced before it’s solved. It’s true that the story’s more about theme than plot. But without a solid plot, theme’s stillborn. And without some kind of distinctive character, there’s no engagement with the plot at all.

So the temptation with Frogcatchers is to zoom through, noting the cleverness and tastefulness, and walk away unaffected. Lemire’s own skill makes the book feel like less than it is. You can read it carefully and attentively and still finish it in less than a quarter of an hour. It’s the sort of work that feels like an artist resolving ideas and emotions within themselves rather than telling a story.