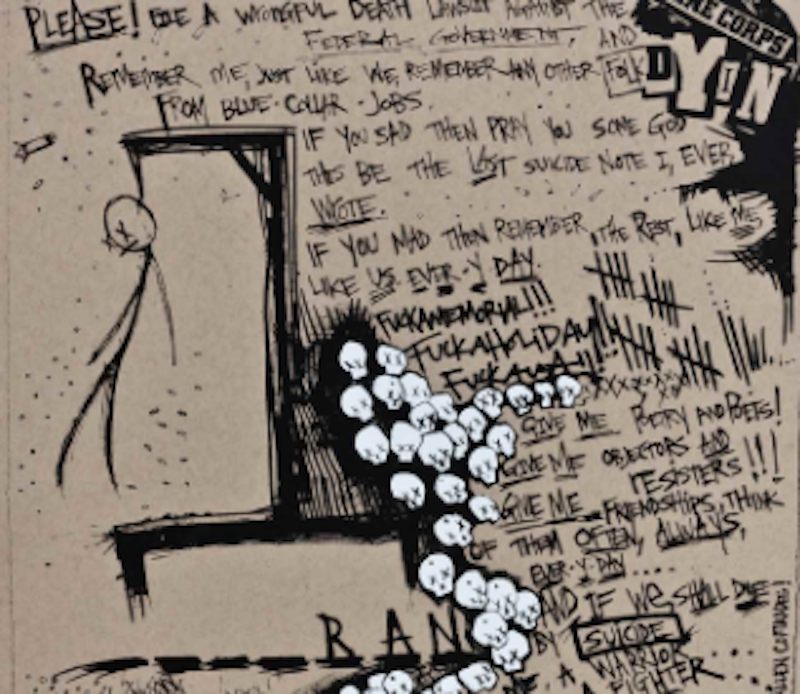 He wore a spermatozoon of a headphone, with the tail curved around his right ear and the end piece—a pleasure bud of a microphone—at the side of his mouth. He wore a hermaphroditic device of clear silicone and pink rubber. He wore a product of the overclass with a wardrobe inspired by the underclass. He wore the uniform of the digerati while he beat his chest backstage. He was the main attraction, the night’s keynote speaker. He was the glorious Darius See.

He was an influencer, an evangelist, a motivator, a guru, a podcaster, and an author too. He was $75,000 an hour in an arena of hourly workers. He was a mogul in a megachurch of wannabe millionaires. He was the merchant of his own catchphrase, SEE Is for CASH®, which thousands had paid cash (at the door) to buy and hold; to wave in an ocean white with foam fingers, hankies, and plastic coffee mugs. He was the star of the show.

“Kill yourself,” he said. “Because if you’re not dying to be free, you’re living to die. Your life is your suicide note. Turn that note into a banknote. Turn it into crypto. Turn it into gold. Redeem your credit. Be a credit to humanity. The human race isa race—and I train winners.”

The audience applauded with a combination of fervency and fear, like followers felled by the Holy Spirit, like epileptics triggered by a sea of flashing placards, like convulsed and concussed (from the push of See’s palm against their foreheads) patients carried off on stretchers.

He emerged from the crowd while his portrait appeared on-screen, in high definition, above a candle rack of smart speakers and multicolored rings. “Alexa, play ‘Winning,’” he said.

The suicidal mantra echoed from an Echo of every shape and size.

Winning to kill yourself

He paced the stage like Jobs. He paused, in contemplation, like a real-life Job. He had the pallor of both, and the best makeup artist of the three, so as to better signal caution in his “distressed” t-shirt of fluorescent yellow. The shirt bore the capitalized letters of a movement, and the bullet holes of a marksman. The shirt was a one-off, with 15 shot groupings from a Glock 9 millimeter pistol. The shirt had entrance and exit wounds. The rims and flaps—the torn sections of cotton and polyester—were splattered with blood. The shirt’s logo was the brand’s namesake: BLACK LIVES MATTER.

A shout came from above. “Seeing is believing. Love you, bro.”

“Respect,” said See, who raised his right thumb and pointed his finger gun toward the man in the front mezzanine. He fired two “love shots” from his single-action revolver, clicking sounds and simulated recoil included.

See jumped and danced with the electricity of the soul. He moonwalked and spun into the worm. He rippled across the stage. He slivered to safety.

It was the shirt off his back.

It was the wet and knotted flag of See’s farewell. It was a remnant of euphoria. It was a raiment of success.

I wear the shirt still—as an eye patch.

I lost an eye that night, but now I am See. He gifted me the right to sell his branded apparel on Etsy. He saw the entrepreneur in me.