A Tourist in My Own Town

I'm a slow walker, and I scrutinize the city for odd details: in a place like New York, there are always some I’ve missed. 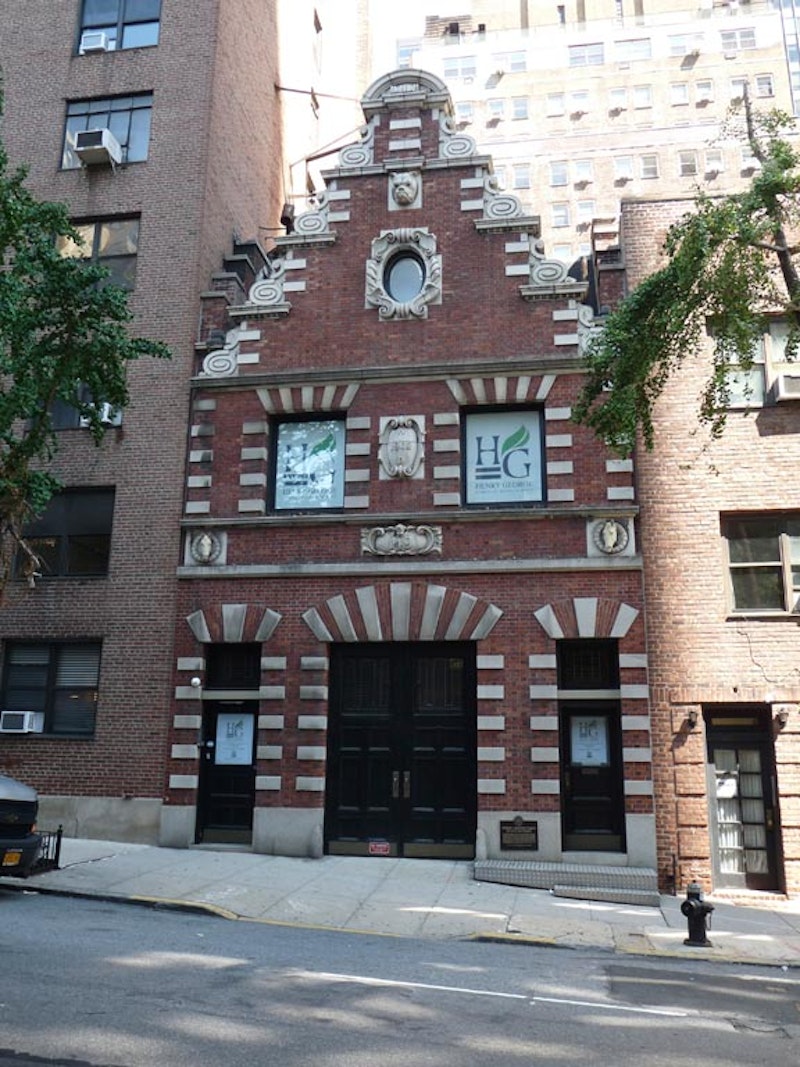 In William H. Whyte’s urban sociological book, City, published in 1988, he quotes The New York Times’ Richard Shepard on pedestrians: “The New Yorker walks with a special purposeful gait, the foot locomotion of people who have a destination to reach and, as befits our municipal tempo, do not want to dawdle about it.” I remain bemused by this predilection; I characterize it as thousands of people on their way to their next buck.

I’ve been a New Yorker for 63 years, born in Maimonides Hospital in Borough Park and a resident of Brooklyn for 35 years and one of Queens for 28 more. I consider myself one of those reviled figures in the NYC psyche: a tourist. I’m a tourist in my own town. I’m a slow walker. I scrutinize the city for odd details: in a place like New York, there are always some I’ve missed. Countless people rush past, walking faster than me. When I’m on a bicycle, I use the highest gear so I can best navigate hills, and I bicycle slowly and plenty of people pass me on the Cross Island Parkway bike path. I couldn’t care less. I go everywhere at my own speed. I haven’t learned to drive—afraid of crashes—but if I did, I’d be in the slow lane, infuriating everyone behind me.

You can observe a lot by watching, as Yogi Berra once said. If you’re rushing about, you’ll miss out on a few things, such as the George Bowdoin Stable in Murray Hill on 149 E. 38th, just west of 3rd Ave. It’s a landmarked structure dating to 1902. The stepped facade was a hallmark of Flemish architecture. It was built for a local honcho, Richard Martin, but acquired by Bowdoin, a business partner of J.P. Morgan, in 1907. What does the bulldog represent? Watchdogs often found their way into company iconography in the late-19th and early-20th centuries; the original logo of American Express was a watchful bulldog carrying two keys in his teeth. Other details abound such as a pair of horseheads, a pair of cartouches bearing the date of construction, and a cherub head or two. 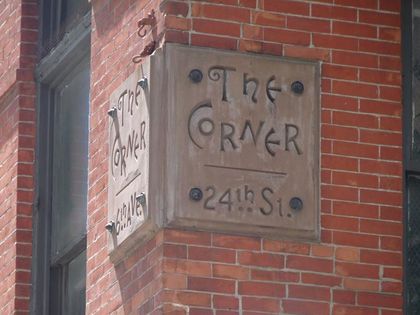 At 6th Ave. and W. 24th, you’ll find a pair of entablatures marked “The Corner” with respective street names; you’ll also find a now verdigris’ed copper pediment ornament with those same words, The Corner, with the words “Koster & Bial.”

As Walter Grutchfield explains at the excellent 14 to 42 website, John Koster and Albert Bial were German immigrants who ran a series of entertainment establishments and concert halls in the late-19th century. They opened their first venue a block south of here, at 6th Ave. and 23rd St., in 1879, a beer garden with occasional performances. Two years later Koster & Bial opened a second establishment at 115-117 W. 23rd; this one was more of a theater offering song and comedy, a precursor of sorts to vaudeville. K & B remained in the 23rd St. area until 1892, when they moved uptown, following much of NYC's entertainment business, to W. 34th, where they ran a larger theater under the aegis of Oscar Hammerstein Senior until K & B’s deaths in 1895 and 1897 respectively. The uptown Koster & Bial's property was purchased by R.H. Macy's in 1901, and The World's Biggest Store remains on the property today.

Thomas Edison presented what he called the first demonstration of a moving picture at K&B in 1896, though that accomplishment is claimed by others.

"The Corner" building at 6th Ave. and 24th was constructed from 1886-1887 and served as K&B's offices, also containing a beer bottling business. It was part of the K&B empire for only a short time. The print at left, from the NYPL archives, shows it in 1892, and it looks remarkably the same today.

For several decades the ground floor of “The Corner” was home to a bar called “Billy’s Topless” until a crackdown on adult entertainment established forced adjustments. It became a bikini bar called “Billy Stopless” before finally succumbing; today it’s a bagel store. 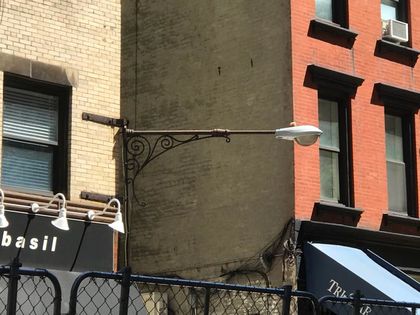 If you walk east on E. 26th, you’ll encounter this ancient lamp stanchion illuminating the corner of 26th and Broadway Alley. Broadway Alley is approximately five blocks east of the actual Broadway, which is the longest street in Manhattan and the Bronx. There is speculation that it acquired the name because local property owners wanted to impart a gay, (in the “upbeat” sense of the word) theatrical aura to the place. However, as you might expect, in its almost two-century history, it has been home to prostitution and crime. It was once lined on its east side with stables and tenement houses. A story holds that the Barnum and Bailey Circus kept their elephants in the alley at one time.

About halfway down the alley going south, the pavement cuts off and the remainder is dirt road, with concrete chips and the occasional weed. There are some signs of remaining Belgian block pavement, and the alley likely once had those along its whole length. A metal fence with barbed wire protects 3rd Ave. business from any miscreants tempted to break in. The rears of some 3rd Ave. buildings extend all the way to the alley, but #8 is the only building that faces Broadway Alley.

I used to be able to walk down the alley’s entire length, past its only address, #8, but today most of it’s fenced off despite its supposedly public domain. 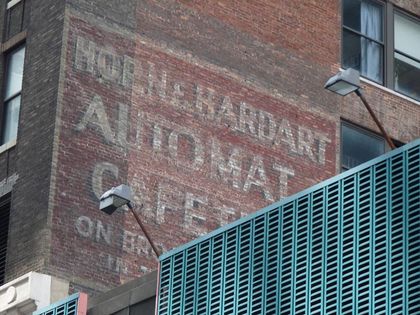 On the roofline of a former parking garage (now home to Jimmy’s, a bar/restaurant) at E. 38th just east of 7th Ave., you’ll find a painted ad for the Horn & Hardart Automat, the last of which closed 29 years ago. The Automat was first brought to the US in 1902 by Joseph Horn and Frank Hardart, who opened up their first restaurant in Philadelphia. New York City got their first Automat 10 years later in 1912. The Automat has been a distant memory for the better part of 40 years, with the last Horn & Hardart closing in 1991. There was a brief revival on St. Marks Pl., but that only existed for a couple of years.