There's no time for small talk when there's vetting to do. 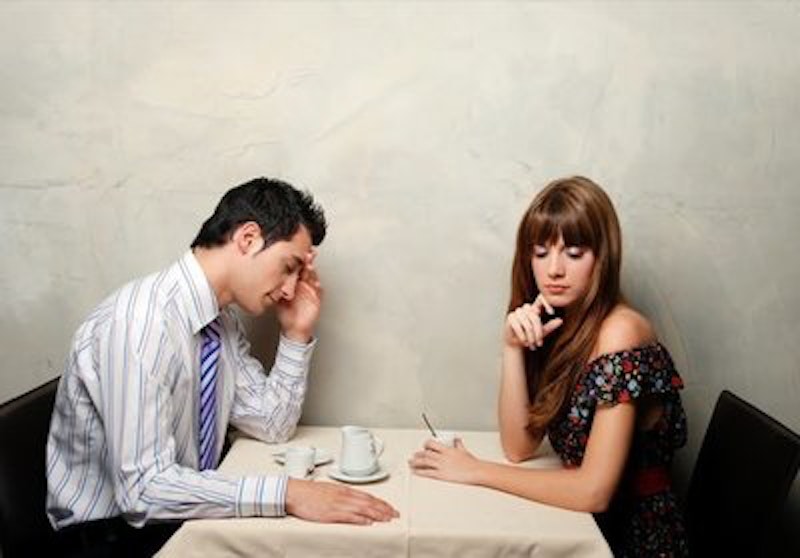 Zane had arrived at the restaurant—Bespoke—before his date. He took a seat at the bar and ordered the Charred Pineapple Mojito and the menu. The bartender shot him a look of approval, and set about preparing it. As he applied the blowtorch to a couple of pineapple slices, Zane surveyed the exposed brickwork, the row of communal tables, and the “ye olden times” illustrations of British people spotily illuminated by mismatched Edison bulbs hanging from the ceiling.

“Is there a theme to the photos?” Zane asked the bartender when the mojito arrived.

“English Plantagenet era,” he said.”It's one of the owner’s passions. You know, John of Gaunt?”

Zane nodded, and when the bartender walked away he googled John of Gaunt. The menu was printed on distressed paper and stuck to a clipboard. Zane's date arrived. He went to greet her and tell the hostess that they were ready to sit. Zane had met Piper the previous weekend at a tsukemono “vertical tasting” event, and they'd bonded as foodies do. Munching on Asian pickles, a spark was kindled. Zane decided they had sufficient common ground to ask her out on a dinner date. Usually he hedged his bets by asking women he'd just met out for a drink well past the dinner hour. That would allow for a quick escape, if it proved necessary.

Piper had enthusiastically mentioned “intersectionality” several times at the tasting, a word he'd heard dropped in other conversations before without understanding its meaning. It sounded cool though. Zane vowed to Google “intersectionality” when he got home, so he'd be ready next time Piper brought it up, but he never got around to it. Piper had said she worked for a fashion firm that specialized in consent-themed underwear, but another pickle taster joined them suddenly and Zane didn't get the chance to find out what that was.

The menu items at Bespoke were cryptic, but Zane didn't want to risk asking the server too many questions. They settled on the “curated selection of sardines cooked three ways” as an appetizer. Piper ordered the Bourbon Apple Sangria, which arrived in a small Mason jar. She picked a thin slice of Maiden’s Blush apple out of her cocktail and munched on it. “So do you believe that Black Lives Matter?” she asked.

“How about blue and white lives?” Piper said.

This seemed to please her. “What are your thoughts on gender and sexual orientation?” she asked.

“I have zero tolerance for transphobia,” said Zane.

“People who discount the damage caused by the trans-misogynoir are the worst, don't you agree?” said Piper.

“Oh, absolutely. The pits of the earth.” said Zane, figuring he'd go along with the flow to show his bona fides. These situations require a certain degree of flexibility.

“So, tell me, how do you work to dismantle sexism and misogyny in your life?” said Piper.

The plate of three sardines arrived. The server explained which parts of the Mediterranean they were carefully selected from, pointing out the distinct cooking method used. The arrival of the food was timely, as Zane didn't really do that much to dismantle sexism and misogyny, although he was adamantly opposed to them. He chit-chatted about the three separate sauces in the appetizer, hoping his date wouldn't press the issue. After the back waiter had cleared the plate and they'd given their entree orders to the server—menu items that included various foraged items and “farm to table” foodstuffs—Zane asked Piper what consent underwear was. Now was the time to shift gears and get things going in a better direction.

“Ours have different messages on them,” Piper said. “For example, ‘My Dress Does Not Mean Yes,’ and ‘Talk To Me’”. She pulled out her phone, worked her thumbs for a bit, and placed it on the table made of reclaimed wood.

Zane needed to process her answer before coming up with a proper response, because this was tricky territory. One wrong word could blow it for him.“What do you think of these John of Gaunt drawings?” he asked. “You know, the Plantagenet era.”

“All I really see is the patriarchy, to be honest, because it was even worse back then. I'm sure John of Gaunt was a major sexist pig. By the way, don’t you think capitalism is exploitative?”

It didn't go like this at the tasting, Zane thought. If it had, he'd have ditched her. Zane needed another drink, pronto. He called the server over and ordered a double Pickleback with Hibiki whiskey from Japan. Piper excused herself to go to the ladies room, and Zane flipped her phone around 180 degrees and snuck a furtive glance at it. He saw a list of 10 questions. Number four was the one about capitalism. No way he was going the distance with them. It was time to start working on an exit plan.

Piper returned, and the Pickleback arrived. Zane swallowed it in a single gulp, chasing it with the tangy artisanal pickle juice that came in a separate glass.

“Whoa, a double shot before the entree’s even arrived?” Piper said.

“Sorry, I meant special. Special times, special measures. As for your question on capitalism, I doubt you'd be getting your sardines curated and cooked three ways under communism. Probably just out of a can, in fact. I'd say capitalism has its pluses and minuses.”

Piper frowned. The entrees arrived and Zane ordered another double Pickleback. Piper went for a Roasted Cherry Bourbon Smash. “You seem conflicted on capitalism,” she said. “How about immigration? Do you think any human can be illegal?

“If for example, Abu Bakr al-Baghdadi and four of his lieutenants managed to cross the Mexican border with the intention of setting up a terror cell in Los Angeles, would I worry about calling them illegals?” Zane said. The Pickleback arrived and he downed it before the server even left. The pickle juice was bracing.

“This must be a really special night for you,” said Piper.

“Oh it is,” said Zane. “By the way, what do you do to support Albino minorities in African countries who are often killed and turned into lucky charms?”

“Fishermen believe that their catches will be bigger if albino hair is fastened to their nets, just to give one example. If you can accept this, that's a deal breaker for me.“

“Of course I don't accept it. That's what colonialism has done to Africa,” said Piper, glancing down at her phone. “What is your understanding of settler colonialism and indigenous rights?”

“What's your understanding of a first date,” said Zane. “You doing your best F. Lee Bailey impersonation with me on the witness stand?”

“I’ll save you asking your next question,” said Zane. “No, I'm not a supporter of the BDS movement. I was born in Israel.” Piper looked stunned. “You looked at my phone when I was away?”

Zane stood up unsteadily. “Next time, don't be so obvious about it,” he slurred. “Sorry I can't stick around for all 10 questions, but I have to go out now and dismantle misogyny and sexism at another bar.” Heads were turning now, and his exit was less graceful than he'd imagined it. That bartender sure poured a heavy shot.

As Zane lurched away, Piper picked up her phone and began texting. “Bernie bro” she typed into her screen, and also “totally not woke,” “fragile masculinity,” and “shitfaced.” She hit the send button and looked up. Zane was handing his credit card to the server. Piper breathed a sigh of relief.