Birds don’t have to do shit except fly. 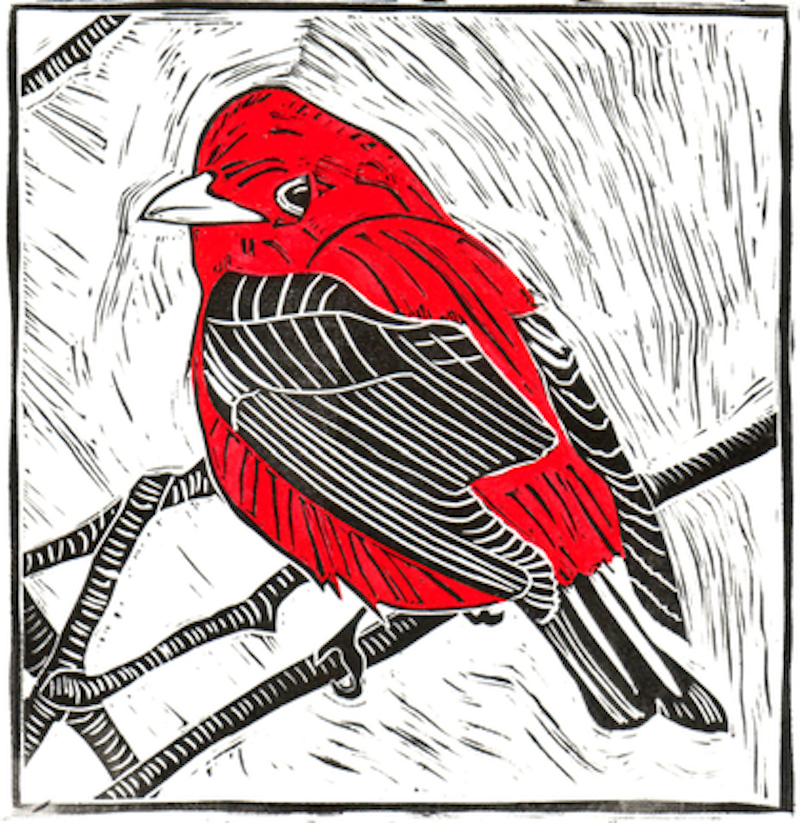 I was walking to 24th St. to catch the J-Church line to downtown San Francisco when I saw a man on his knees in front of a two-story home. He had something in his hands and was crying. He didn’t look homeless. He wore a silk button-down shirt with khakis and polished black shoes and he had several rings on his fingers.

Usually I’d walk past this kind of scene. But as I neared the man he turned towards me and thrust his hands forward.  He was holding a dead sparrow.

He pointed to a car parked in the driveway. It was a 1960s convertible Skylark and beside the driver side door there were several dead birds. “He electrocuted the car,” the man sobbed. “Look.” I saw a car battery on cinderblocks. Attached to the battery was an electric cable clipped to the chassis above the front left tire. Apparently the car owner was charging the steel frame with a low-level electrical surge.

“Why would someone do that?” I asked.

“People were stealing his stereo. He wanted to scare them away. But he killed the birds.”

“You know this guy?”

This was how I met my neighbor Mike Hunter. We began encountering each other at the local coffee house. We’d chat about the latest political news or whether Steve Young was a better quarterback than Joe Montana. Mike was a freelance accountant who worked out of his apartment. He grew organic vegetables in his backyard and spiked his lattes with shots of chlorophyll that he claimed “cleaned the blood.”

Mike was a passionate birder. He showed me an album filled with images of birds he’d photographed around the country. He pointed out waxwings and thrushes and jays and loons. The birds ranged in color from bright yellow to dark blue. Some were striped, others spotted. One had a long needle-like bill while another had a ruffled Mohawk. While Mike flipped through his journal, his energy increased and his posture straightened. He became a passionate evangelist spreading the word about the “angels of the sky soaring all around us.”

“How many birds did you notice today while you were walking for coffee?”

“None,” I answered sheepishly.

Several months later I found myself in the Mendocino forest with Mike. He was searching for the elusive Scarlet Tanager, a red Cardinal-like bird found mainly on the East Coast. The Tanager had been spotted in Northern California and Mike was eager to see one up close. I had no interest in bird watching. But my girlfriend was out of town and I’d been in a bit of a funk. When Mike asked me to join him I thought about how excited he became when he spoke of his birds. I was hoping a trip to the woods would do the same for me.

I soon learned bird watching was actually tree watching. Mike would hear a shrill whistle or complex warble and he’d whip out his binoculars. He’d stare at the top of a tall redwood looking for some kind of movement or color variation. He’d admonish me to remain quiet and still. His patience seemed endless. I quickly grew bored. By mid-afternoon I was starving, grouchy and exhausted.

“Eat some seeds,” Mike recommended. “That’s what the birds eat. They’re perfect protein.” Mike finally tired. We’d seen several woodpeckers, blue jays and something called a Clark’s Grebe. But no Tanager. We hiked back to the van.  Mike began spitting at trees and softly muttering to himself.

“The Tanager is a harbinger of good luck. I guess I’m cursed,” he said.

He sat down on a fallen tree and I sat beside him. He pulled out a steel flask and took a deep swig. I took a tiny sip and began coughing. Mike launched into this crazy story about his time in the Navy during the Vietnam War. He was an artillery loader, a guy who lifted 40-pound shells into cannon-like guns.

“We’d cruise the coast about a mile off shore. The spotter would search for circling birds overhead. This meant dead Vietcong. Which meant live Vietcong were nearby. The spotter gave the coordinates and we’d fire ammo deep into the jungle. At the time I was shooting up heroin on a regular basis. I kept a syringe and a stash of dope inside my cot. If the stuff were discovered I’d be subject to a court martial and jail time. The military viewed drugs as a threat to their whole establishment. One morning, about an hour into my shift, a soldier taps me on the shoulder. ‘C.O. wants to see you,’ he tells me. I froze. I was certain they found my stash. I walked to the Commanding Officer’s cabin and took a seat in front of his desk. ‘Private Hunter, I have bad news,’ he says. I’m thinking to myself, 20-year prison sentence, ass-kickings, butt-reamings, mental and physical torture.  They’re gonna string me up like a dead duck. Then the C.O. says, ‘We received word that your father committed suicide. Jumped off the Golden Gate Bridge and died on contact. Sorry to break the news to you, son. That’s tough luck.’ I never felt so relieved in my life. I thought for sure they found the stash. Now not only was I off the hook, I could return to the States for the funeral. Best thing my pop ever did for me.”

Mike took a deep swig from the flask and started laughing. I was stunned and didn’t know what to say. Mike handed me the flask. “You know why I like birds so much?” he asked. He unrolled his shirt sleeve and showed me a tattoo on his bicep of a hawk with spread wings. Beneath the image was the inscription Matthew 6:26.

“That’s from the Bible. It says birds don’t have to do shit except fly. God will feed them, God will protect them, God will give them a place to live. Pretty sweet deal right?”

We sat in silence. I stared at a burn mark on the fallen tree. A wide array of cracks and fissures spread from a black scar the length of the trunk. It appeared the tree had been hit by lightning. Mike finished the flask and stood up. He started walking. I followed and stared at the forest canopy above. I visualized birds circling over dead Vietcong. The sun was setting and it was starting to get cold. I was ready to be back in the city.