Eastern Europe in the East Village. 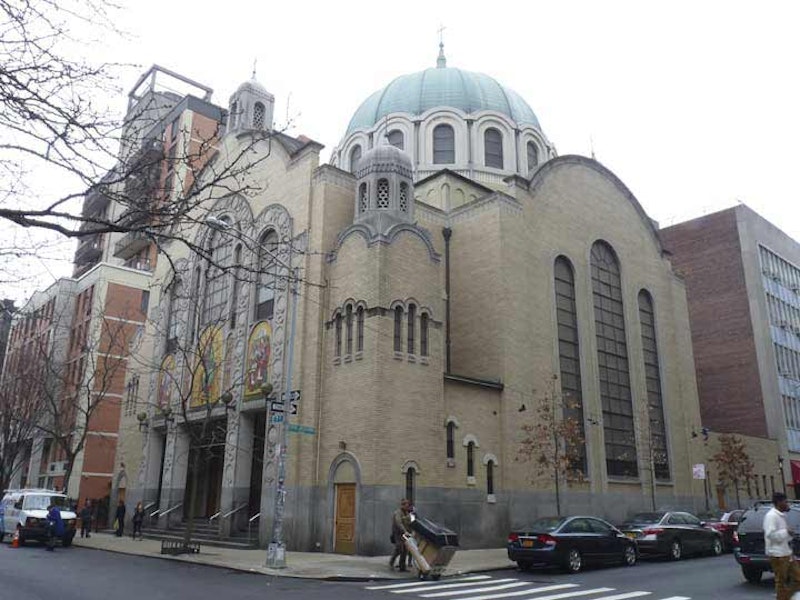 The East Village has long been a stronghold of eastern European immigrants, from Germany originally to Czech, Polish, Slavic and Ukrainians, with the Ukrainian influence especially strong on E. 6th and 7th Sts. Though St. George’s Ukrainian Catholic Church is practically new—built in 1977—it faithfully evokes the Byzantine styles that originated six centuries prior. St. George’s was first established at 1st Ave. and E. 20th St. in 1905, and moved to E. 7th between 2nd and 3rd Aves. (at Hall Place) in 1911. This new church finally opened in 1978 and at the same time, Hall Place was renamed for Taras Shevchenko (1814-1861) a Ukrainian poet, artist and social reformer known as the Bard of the Ukraine. The city restored a Hall Place sign in addition to the Shevchenko sign a few years ago at E. 6th. 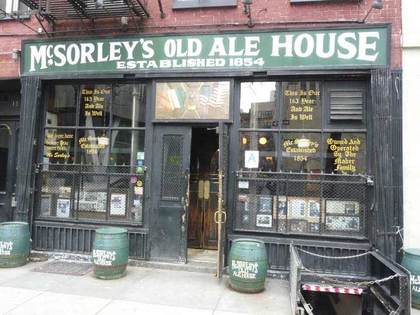 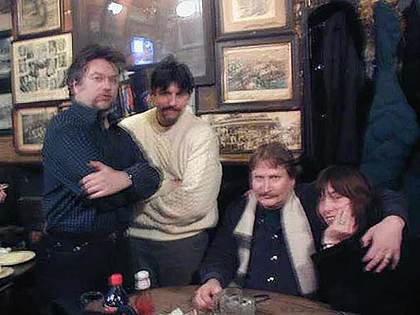 Entering E. 7th St., one of the first sights is McSorley’s Old Ale House. The date shown on the sign is generally accepted, but late historian Thomas McDermott raised doubts about the date while poring through property records; he made the opening date 1862, which means the story about Abe Lincoln downing a cold one after his famed speech at Cooper Union to kick off the 1860 presidential campaign is in doubt.

I’ve been in McSorley’s just once, on a “bar crawl” through some of NYC’s oldest bars. Here I am on the left with the former King of NYC Lamppost Chroniclers Jeff Saltzman and musician/author Nigey Lennon (who passed away in 2016) and her husband Eric Weaver. Jeff and his family moved to North Carolina, and the title has been handed off. Pretty much everything you have read about McSorley’s, from not admitting women until 1970 and the dust-encrusted wishbones is true. 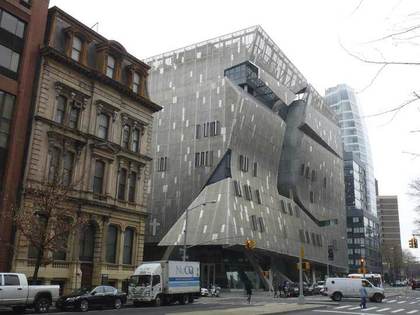 41 Cooper Square, designed by architect Thom Mayne, is a new addition to The Cooper Union for the Advancement of Science and Art campus. The building, originally known as the New Academic Building, stands on the site where the School of Art Hewitt Building was located. The nine-story 175,000 square feet academic center houses the Albert Nerken School of Engineering with additional spaces for the humanities, art and architecture departments. There’s also an exhibition gallery and auditorium for public programs and retail space on the ground level. Construction of the building began in 2006 and was completed in September 2009.

The 1867 Metropolitan Savings Bank building at E. 7th and Cooper Square, seen here at left, survives as a church. Quite a contrast between the esthetics of 1867 and 2010. 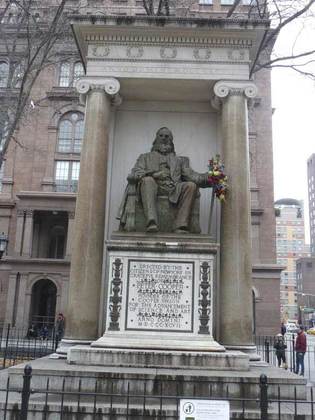 Who is that guy? Inventor and industrialist Peter Cooper himself, who here turns his back on the school he founded in 1857. Cooper Square (Astor Pl. at 3rd and 4th Aves)., was named for industrialist and inventor Peter Cooper (1791-1883), the developer of the first practical steam engine. He helped build America’s iron and cable industries (partnering with Samuel Morse in laying the first trans-Atlantic cable), and was one of the first developers of gelatin made from rendering mammal remains. In 1857 he founded Cooper Union for the Advancement of Science and Art in a new brownstone building at one of Manhattan’s true crossroads, the Bowery (originally the Post Road) and Astor Pl., once known as Art St.. The building is supported by steel rails invented by Cooper.

The statue was produced in 1894 by NYC-raised sculptor Augustus Saint-Gaudens (1848-1907), with the pediment designed by Stanford White. Saint-Gaudens’ other major works include portraits of Admiral David Farragut in Union Square; a standing Lincoln in Lincoln Park, Chicago, and a seated Lincoln in Grant Park, Chicago; the Robert Gould Shaw Memorial in Boston Common; the gilded General William Tecumseh Sherman in Grand Army Plaza, Central Park; and the Charles Stewart Parnell monument in Dublin (Saint-Gaudens was born in Dublin and spent the first six months of his life there, before his family emigrated to the USA). Oddly, the Bowery officially ends at E. 4th St., where Cooper Square begins. It splits in two at E. 5th, becoming 3rd and 4th Aves., but things are a bit squirrelly since addresses as far north as St. Mark’s Pl. have both 3rd Ave. and Cooper Square addresses. Fourth Ave. is a bit more forthright, beginning at E. 9th and running for only a few blocks to Union Square.

I like that NYC names its major intersections for statesmen and in this case, inventors, instead of the monarchs you will find overseas. 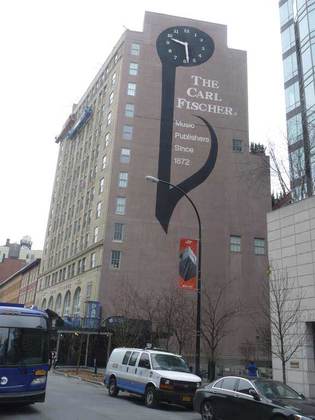 Music publisher Carl Fischer, and the gigantic note on its former headquarters have been an indelible part of Cooper Square for years. Patriarch Fischer (1849-1923) immigrated from Germany in 1872 and was succeeded by his son Walter Fischer and later, son-in-law Frank Hayden Connor. Fischer Music was located in Cooper Square from the late-19th Century, but in 1923 the firm constructed its 12-story office building, later with the Big Note, which continued to house company offices until 1999. A very faded ad for Carl Fischer Musical Instruments can be seen on E. 16th St. just east of Union Square. 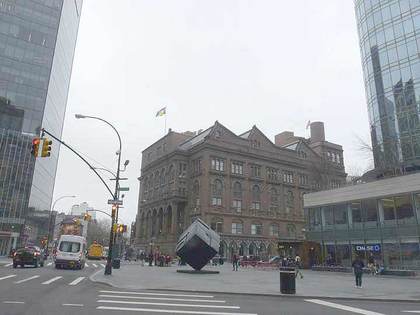 The Cooper Union building still anchors Cooper Square as it has since 1859. The school was founded by inventor Peter Cooper. The school’s great hall was where Abraham Lincoln launched his presidential campaign in 1860; other speakers have included Mark Twain, Frederick Douglass, Susan B. Anthony and presidents Grant, Cleveland, Taft, Theodore Roosevelt, Wilson, Clinton and Obama. The college is divided into three schools: the Irwin S. Chanin School of Architecture, the School of Art, and the Albert Nerken School of Engineering. It offers undergraduate and Master’s degree programs exclusively in the fields of architecture, fine arts, and engineering. The school is now flanked on each side by glass towers: 51 Astor Pl., completed in 2013 (Fumihiko Maki, arch.). It’s home to IBM and a branch of St. John’s University, with a CVS drugstore on the ground floor. On the right is the undulating exterior of the Astor Place Tower, the “sculpture for living” residential tower designed by Charles Gwathmey in the early-2000s. In the foreground is Tony Rosenthal’s nearly one-ton cubist sculpture called Alamo, installed in 1967; it can rotate if you push it hard enough. After a lengthy hiatus for repairs, it once again dominates the triangle formed by Cooper Square, E. 8th and Astor Pl.