Watching the humpbacks off New Jersey. 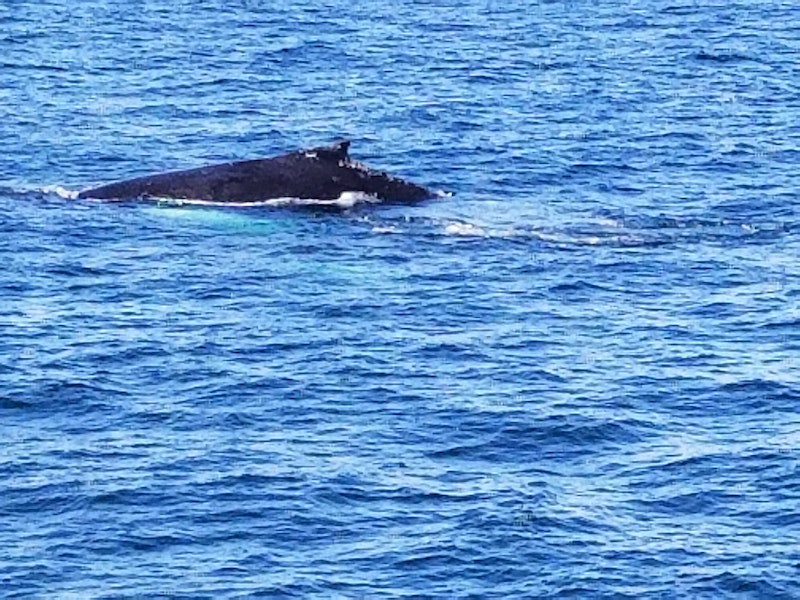 My wife, son and I went whale-watching on the Jersey Shore over the Labor Day weekend, a gift for my 55th birthday. We saw at least four humpback whales, some surfacing multiple times; they were juveniles, three-to-seven years old, here to feed on small fish. The Seastreak company, which runs ferries between Manhattan and the Shore’s northern edge, began these tours this year, an astute move to replace commuter revenues battered by the pandemic. This trip took us around the Sandy Hook peninsula and out into the Atlantic.

The passengers did a reasonable job of social distancing, though it’s hard to avoid congregating along rails as whales appear. We were outside on the upper deck, where masks are optional, not mandatory as in the cabins. The tour’s naturalist, a young woman speaking over the P.A., expounded on the cetaceans’ biology: the baleens that filter water out and food in; the powerful muscles between dorsal fin and tail that enable propulsion. Humpbacks have made a comeback off New Jersey, though some other whale species in the area remain endangered.

I’d wondered if we might also observe a pro-Trump boat parade during this outing, but it turned out the one expected on the Shore this day was far to the south. Still, on a visit a few weeks earlier, I’d seen several boats bearing Trump flags speed through a no-wake zone in the Shrewsbury River, an estuary between the mainland and the peninsula. So, shortly after the whale outing, it was no great surprise to learn that several boats of a pro-Trump flotilla had sunk amid churned-up waves in a Texas lake.

The Jersey Shore is mostly Trump country. A map of the 2016 presidential election shows the Shore as mostly red, with a few spots of blue toward New York City and down by Atlantic City. By contrast, a diagonal streak of blue runs inland through largely urban areas of the state, stretching roughly from New York City to Philadelphia, a swath that makes New Jersey a blue state overall. But on the Shore, a food truck festooned with giant Trump flags blends into the scenery, and “Trump 2020: No More Bullshit” is a popular slogan on signs.

In his 1980 book Cosmos, Carl Sagan, with his knack for taking an extraterrestrial perspective, asked readers to “consider a rare planet, the only one in its system with a surface ocean of liquid water. In this rich aquatic environment, many relatively intelligent creatures live—some with eight appendages for grasping; others that communicate among themselves by changing an intricate pattern of bright and dark mottling on their bodies; even clever little creatures from the land who make brief forays into the ocean in vessels of wood or metal. But we seek the dominant intelligences, the grandest creatures on the planet, the sentient and graceful masters of the deep ocean, the great whales.”

Forty years after I first read those words, it was good to finally encounter a few of those intelligent creatures. There’s a lot we don’t yet understand about cetaceans, including the humpbacks’ tendency to protect members of other species from attacks by predators. Humpbacks have interfered when orcas attack gray whales, for example, and they even sometimes thrust onto the ice to rescue seals from the killer whales. Interestingly, the humpbacks seem to race toward such confrontations.

Humpback whales don’t hold the weak and vulnerable in contempt. They don’t consider it foolish to risk one’s life helping others. May they long thrive along the Jersey Shore.