How to read his first book, Some Trees. 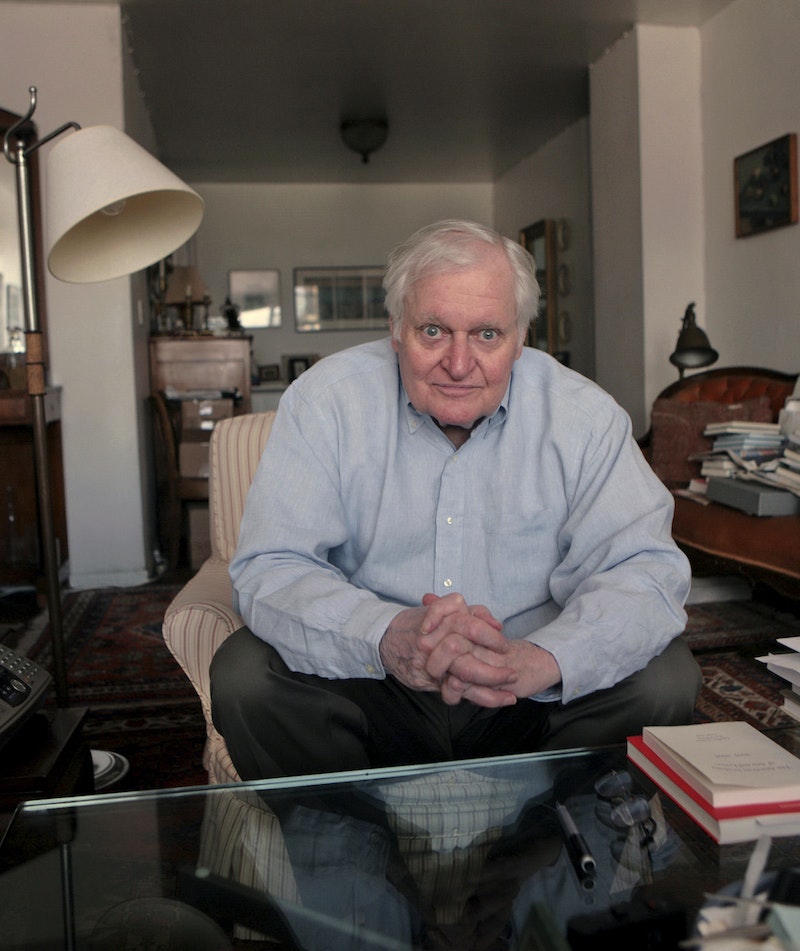 “Worms be your words, you not safe from ours,” John Ashbery writes. And if that doesn’t make much sense to you—you’re not alone. Since Ashbery published Some Trees, his first collection of poems in 1956 at 29, he’s baffled and irritated readers with obscure and wormy words. A typical Ashbery effort will begin in the middle, address someone uncertain, throw on a word like “fume,” and then end in a welter of incongruous garble. The joke of the poem “Meditations of a Parrot” is that Ashbery’s poems often read exactly like parrot thoughts; someone speaking words at random with a blank, colorful, bird-like ignorance of their, or any, meaning. “Oh the rocks and the thimble/The oasis and the bed/Oh the jacket and the roses.” Polly wants a semiotic smear.

You may well wonder, “Why bother with this nonsense?” That was my reaction when I first encountered Ashbery’s opaque verse 30 years ago. One can live a perfectly happy Ashbery-less life, free of parrots and worms and vast frustration, and so I did. Recently though, I wandered into the Ashbery maze again, and while I still can’t get out, I’ve unexpectedly enjoyed tripping over rocks and drinking at the oasis of confusion.

Some Trees isn’t a bad place to start trying to separate the Ashberian forest from the individual broccoli. The volume (perhaps through inattention) includes a couple of poems that make sense in a conventional manner. Reading those first doesn’t provide a key to Ashbery’s work. But it does show you where some of the unpickable locks are.

The single most accessible work in Ashbery’s entire oeuvre may be “The Instruction Manual,” a longish poem about writing an instruction manual, just like the title says. The narrator is sitting at his desk looking out the window and seeking inspiration for his “manual on the uses of a new metal.” To avoid the task at hand, he starts imagining “dim Guadalajara! City of rose-colored flowers!/City I wanted most to see, and most did not see, in Mexico!”

The rest of the poem is a description of this imaginary Guadalajara, complete with colorful processions in the city street, young lovers, elderly women boasting of their sons, and a “public library, painted several shades of pale green and beige.” At the end, the narrator’s daydream is complete, and he returns to working on his instruction manual.

The poem’s fun is in its elaborate decadence, half nostalgia and half parody. The bored office drone writing some nonsense user’s guide to a new metal is as much a figment as the distant and completely made-up city.

Guadalajara is a tongue-in-cheek metaphor for romantic poetic Keatsian effusion. But the instruction manual is also a symbol or stand-in for poetry. Ashbery is writing instructions for creating traditional romantic poetry or trying to avoid writing those instructions. The poem looks like it’s about a task interrupted by fanciful imagination, but in fact there’s nothing but interruption and fanciful, or sometimes tedious, imagination.

“The Instruction Manual” mainly instructs you that Ashbery’s poems are wandering around Ashbery’s mind. They’re little journeys into no place. With that not-guide, you’re ready to get lost in “Grand Abacus.” The poem starts:

Perhaps this valley too leads into the head of long-ago days,

What, if not its commercial and etiolated visage, could break through the meadow wires?

It places a chair in the meadow and then went far away.

People come to visit in summer, they do not think about the head.

Soldiers come to see the head. The stick hides from them.

Ashbery starts with a deliberately casual “Perhaps,” before starting to ramble towards the “head of long-ago days.” The head here could mean something like “beginning,” or “source.” But it also could be a metaphor for journeying into someone’s mind. And then as the poem continues or collapses, that metaphor solidifies and congeals, and we’re somehow talking about an actual giant head, which sits somewhere (that valley?) as a tourist attraction.

The absurdist fancy is anchored by staccato, matter-of-fact language. The line “Soldiers come to see the head. The stick hides from them,” is composed almost entirely of one-syllable words. That’s the writer of that boring instruction manual, speaking like a plain man about metal. Or heads. Or sticks. Or some something lost—and the poem ends with the head maybe turning into children who maybe turn into rain which sort of vanishes, much like the people of fake Guadalajara vanished. The progressive morphing of metaphor is disturbing, like watching the skin drift off Ashbery’s face. What’s left behind is an urbanely grinning skull.

The other comprehensible poem in Some Trees is “The Orioles.” Here the narrator thinks about the birds that “cluster at the feeding station” singing “rags of song” in the spring, and then fly off again at the start of winter in the final stanza.

But how long can the stopover last?

The cold begins when the last song retires,

And even when they wing against the trees in bright formation

You know the peace they brought was long overdue.

When the birds are there, the speaker imagines missing them. When they’re gone, the speaker anticipates their return. The birds’ song or poetry is as much in absence as in presence. Meaning appears and disappears, winging into voice and into silence.

As “Orioles” indicates, Ashbery loves poetry of cycles, where words and phrases appear and disappear with different meanings or no meanings. One of his favorite forms is the sestina, a lengthy poem in which the last words of each line in each stanza repeat according to a set form. He also adapted the pantoum, a Malaysian form, to English. In pantoums, whole lines repeat from quatrain to quatrain. Ashbery’s poem, called “Pantoum,” has an irritatingly pleasant music. You feel like if he’d just say it one more time, you’d understand. And then he does. And you don’t.

Footprints eager for the past

Through the vague snow of many clay pipes,

And what is in store?

Footprints eager for the past,

And what is in store

For those dearest to the king?

It goes on like that, with vague courtly elements emerging and submerged again in “the usual obtuse blanket.” The last quatrain returns to lines from the first:

Some blunt pretense to safety we have:

For they must have motion

Through the vague snow of many clay pipes.

You feel like you’re watching mystery and motion through that “vague snow.” Language shifts and speaks to itself, as you sit over to the side sophisticated and bemused, waiting to drop into whatever is in store. When I was younger, I disliked Ashbery’s poetry in part because it felt like he was making fun of me. And his poetry is sort of a joke on the reader for being naïve enough to open the book and expect wisdom, pleasure, sense. That’s also one of the comforts of Some Trees. If you’re missing something, so is everyone else. As someone says somewhere in Some Trees. “None of us know.” Ashbery’s poetry is for the distracted, the confused, and the lost.