Everybody wants to go to the top, but the bottom is where it starts. 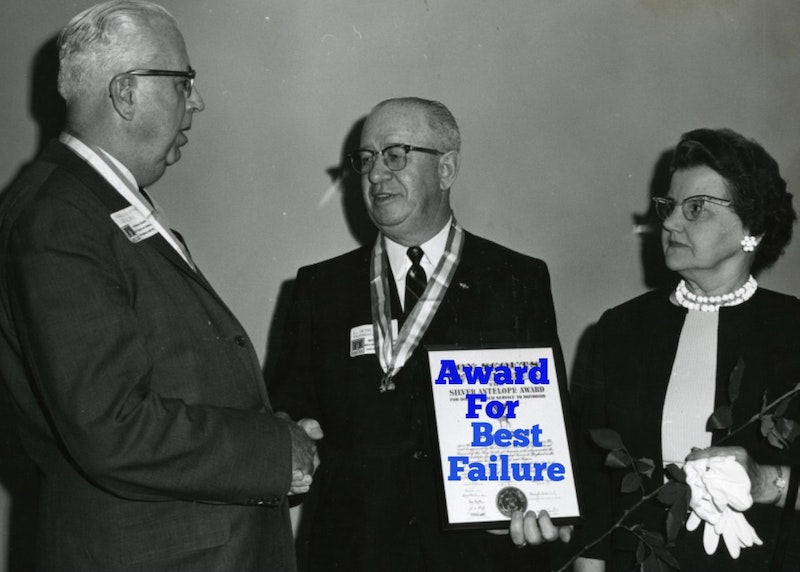 The writer Alexander Dumas, credited with the adage, "Nothing succeeds like success," leaves me with an empty feeling, like his most famous line "All for one and one for all." Dumas uttered those words that come from his story “The Three Musketeers.” His success only garnered a candy bar and a Hollywood classic film of the same name. He was long dead when that happened. However, success comes in many shapes and forms. It's the main objective in business, finance, sports competition, the battlefield, or academic achievements. But winning is the glory in all endeavors. Oscar Wilde took it a step further, claiming, "Nothing exceeds like excess." It follows suit, and philosophic words converge in the language of quotes that signify much ado about something or nothing. And failure's never an option in any field.

Although he's not an average inspirational guru, the absurdist, existential writer Samuel Beckett revels in failure. An excerpt from his novella, Worstward Ho, "Ever tried, ever failed. No matter. Try again. Fail again. Fail better." The title may or may not be a veiled take on Mark Twain's western travelogue novel, Westward Ho. While you're scraping the muck off your boot, remember the immortal lines from The Unnamable, " You must go on. I can't go on. I'll go on." The first and final lines from his play, Waiting for Godot, sum it up nicely. The play begins and ends with similar words. Its last lines are: "Well, shall we go./Yes, let's go./(They do not move). Let's go." Mark Twain also has many famous quotations on the merits or demerits gained or missed from golden opportunities. He always had something to say about everything. Who doesn't?

I've failed enough times to know better. Furthermore, it never stopped me from failure. Self-sabotage and fraud are my usual modus operandi. I've had great triumphs and small victories, though. Dismal results of disappointment are the running jokes in my worldly pursuits. Please don't ask me. Far be it from me to tell anyone how to achieve success. It's dumb luck and gamble. In hoping for the best in any situation, having low expectations is the way to go. Waiting for others to make a move or extend a helping hand on your behalf is naive. At best, it’s the stuff of hope and faith. Only God knows, and he's not talking. Nobody gives a damn, so keep it to yourself and save your litany of invocations.

The epitaph, "Don't Try," is carved on the tombstone of a poet. He also said, "If you're going to try, go all the way. Otherwise, don't even start." This poet said a bunch of other stuff too, but he's also dead. Maybe that's the key to failure or success. In dying, we achieve all our goals. Usually, frozen with the fear of even attempting to fail, I flounder in procrastinating the obvious. Then I stumble and muddle through. It's the way to cope with the inevitable. But time isn't wasted if you enjoy flittering it away. Doing absolutely nothing can be just as rewarding as busy chores. Some must be in constant movement.while others remain ideally still thinking nada. It's hard to imagine life without its ups and downs. Otherwise, it would resemble an artificial paradise where it's always sunny. A rose-colored make-believe utopia where everything is jake and nothing ever happens. Sort of like what some believe heaven is. You can't fail in heaven any more than succeed in hell.

My most remarkable success story is always my greatest failure. It's like drinking coffee and falling asleep. To dream about that perfect life where it all comes together nicely. Alternately, in vain attempts to achieve my goals, the roadblock is the mirror image of my darkest fears. It's the ultimate exercise in futility, a reason to continue toward folly. The answer is the question of facing that reflection of yourself as you see fit. There are too many obstacles that are detracted phantoms standing in the way.

If you could do it all over again, would you? If so, why bother with the obvious? On the other hand, to make the mess clean it up and start over. That's how it works, a series of nonsensical events that push ever forward. We continue because that's all there is. To attempt something, more or less, anything will do. To feel beating hearts, air moving inside out of your assumptions, letting a bit of light in on the subject. Take a chance on the lottery ticket of your life. We can't all be winners. Kings and queens need fools and jesters. Everybody wants to go to the top, but the bottom is where it starts. You've got to start somewhere. They're not handing out any awards for losing.