Loving Reaper may provide particular catharsis for grieving pet owners, but all animal lovers should read this book. 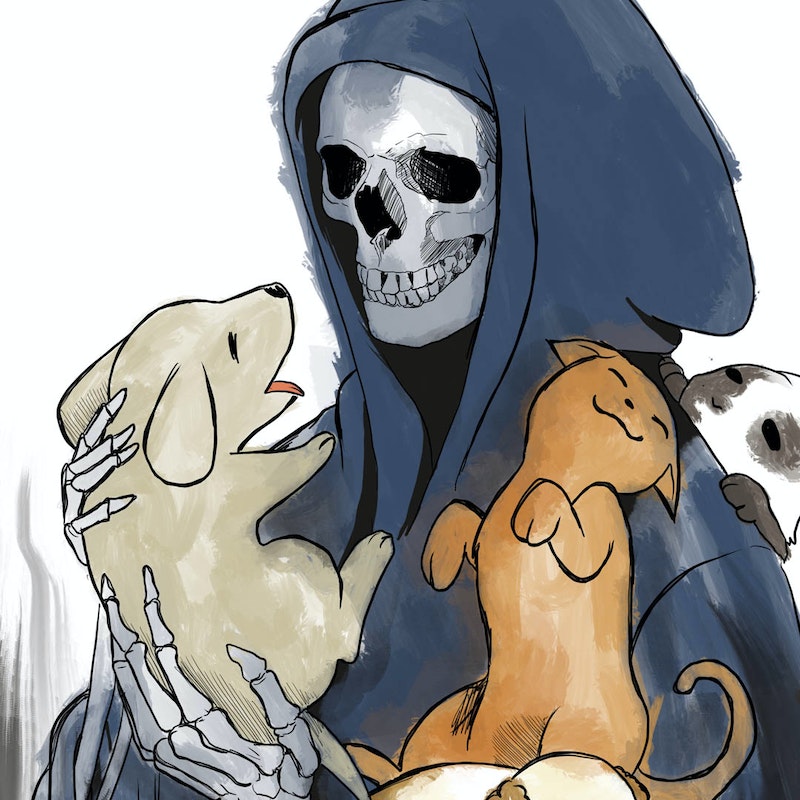 Loving Reaper is a striking work—a hard-bound collection of illustrated stories on the death and afterlife of animals, guided by a kindly version of the Grim Reaper. Young Germany-based artist Jenny Hefczyc, creating as Jenny Jinya, wrote and illustrated these spare, stylized, emotionally rendered cartoons, some of which first appeared on her popular Instagram account.

The cover of Loving Reaper sets the tone, sad and sweet and striking, showing the Loving Reaper lounging in a dim forest setting with a ghostly cat, who’s swatting at ghostly butterflies. Dressed in the familiar vestments of a traditional Grim Reaper—cloak and scythe—but empathetic and even regretful beneath the forbidding digs as he goes about comforting animals in their dying moments, deaths that often come by human hands or human neglect. The book’s composed of such vignettes, from the perspective of the dying animal. Jinya casts a wide net over the animal kingdom. Her stories of abuse, gently rendered, range from elephants being ridden to death to whales going insane in captivity.

Occasionally an animal escapes death and leaps into the hands of Life, personified as a friendly, vaguely Egyptian young goddess decked out in celestial symbols. She’s the Reaper’s friendly rival of sorts, although neither’s able to affect the course of earthly life. Their yin-yang alliance suggest they are two sides of the same indispensable coin: “Every life I bring into this world,” Life says, and the Reaper finishes, “will never be forgotten in mine.”

Does all this sound soppy and morbid? Somehow, it’s instead moving.

There’s a tonal risk in portraying death as kind-hearted and regretful. But as a reader still coping with a pet’s sudden passing, I found this book poignant, especially the stories of family pets, right down to their favorite toys (a tennis ball, a little stuffed animal fish). Jinya respects the grief humans feel for our pets, showing grief is nothing to be ashamed of. Death is portrayed as something to be neither welcomed nor feared. The artist’s empathy comes through in every panel, and her soft, rounded images (the drawings are stylized, not disturbing or bloody) reinforce her public service addresses at the end of some stories: “Please do not leave them alone in their final moments. You are their whole world.” In particular she pleads with readers not to bring home exotic animals as pets before they know what they’re getting into.

The artist’s palette shades toward grays, blacks and whites, with a translucent ombre gray-green representing the animals that pass into the spirit world, although the color scheme breaks out into bright colors when Life appears. Jinya’s Reaper is a brilliant conception. His rictus of teeth registers as a genuine smile and his persona is kind while still remaining a bit sinister. One needn’t be a vegetarian or a card-carrying member of PETA to appreciate these sentiments—there’s nothing here about meat-eating, or factory farming—and Jinya doesn’t try to convert you. The inherent violence of the circle of life of the animal kingdom itself is elided, but no book can encompass everything.

As she writes on the back cover in imperfect but powerful English: “With these comics, the author wants to show the diversity and beauty of the animal world, but above all to denounce human behavior that we should no longer see, ever.” Portions of the proceeds are donated to animal shelters. Loving Reaper may provide particular catharsis for grieving pet owners, but animal lovers of all genres should consider a purchase. Loving Reaper is published by the Belgian company Livr’S Éditions and costs 35 euros (about $38 American, not including shipping costs from Europe). It’s a masterwork that would grace any animal lover’s shelf.