A River Of Industry

Once the industrialists “modified” the area, the canal system could generate 35,000 horsepower. 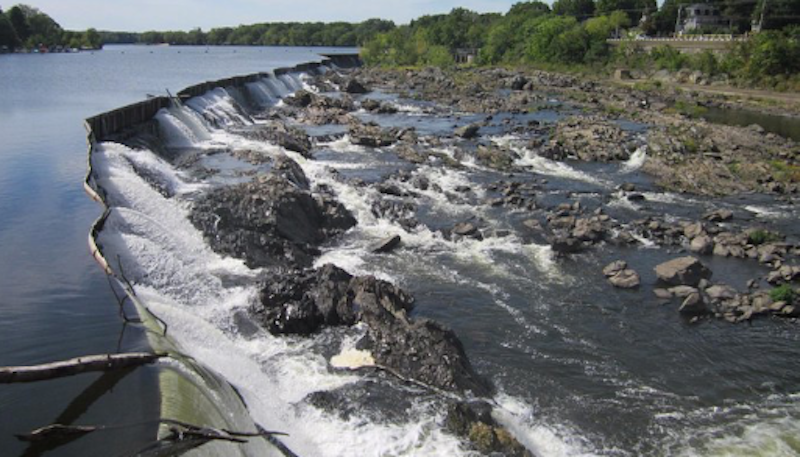 The Merrimack River starts in Franklin, New Hampshire, where the Pemigewassit and Winnipesaukee rivers merge just above Concord. The water comes from a watershed of some 5000 square miles in the central lakes region of that state; these lakes include Squam, Winnisquam, Newfound, and Winnipesaukee. The name Merrimack seems to have come from how French explorers heard the natives describe the river. “Merrimack” roughly translates to “a place of strong current.”

The river flows southeast until it gets to Lowell, Massachusetts. There, it turns sharply northeast before emptying into the ocean near Newburyport. This sudden bend is due to ancient glacier activity. When the glaciers began to retreat 10,000 years ago, the receding ice left tons of rocks, till and sludge where Lowell is now. This detritus dammed the river, forcing it to change direction. We know this because of the Middlesex Canal’s construction, which opened in 1803 and was intended to link Lowell to Boston. When the 27 miles of earthworks were excavated for the canal, geological evidence pointed towards the original course of the Merrimack.

The Franklin end of the Merrimack is 300 feet higher than the sea-level end, and the length of the river is a bit over 110 miles. That means the water, on average, drops 2.5 feet per mile. Much of the fall (“run” is probably more accurate) occurs in three select locations that made the Merrimack highly desirable to capitalists as sources of water power.

The first location was the Pawtucket Falls and rapids at Lowell, Massachusetts, where the river rushes for about a mile and drops 32 feet. The first canal built there, around 1800, was intended to bypass the falls, so timber could be shipped down the Merrimack to Newburyport. Because of the kinetic energy generated by that much water in motion, mills were established, and Lowell became the first major textile city in America. At its peak, with 200,000 spindles and many hundreds of Northrup looms, the mills produced 50,000 yard-wide miles of finished cloth a year. The city was named after Francis Cabot Lowell, one of the Merrimack’s earliest industrialists. The mill area of Lowell is now a National Park, the first contained within city limits. There are history and technology museums, boat tours on the canals, and a floor running 30 power looms that’s so loud that earplugs are offered, and recommended, at the door.

Forty miles north of Lowell are the falls at Manchester, N.H. These are the Amoskeag Falls, from a Pennacook word meaning “a good place to fish.” The water at the falls drops about 50 feet, and a canal was dredged there to bypass those falls to facilitate navigation. Once the industrialists “modified” the area, the canal system could generate 35,000 horsepower. The Amoskeag mill complex was once the largest in the world, producing half a million yards of fabric (including denim for Levi’s jeans) a week. A mill’s potential seems to be measured by the number of spindles on site. My guess at a reason is that the number of spindles translated to the amount of yarn and thread produced. The Amoskeag complex at its peak employed 17,000 people and housed 700,000 spindles feeding  4000 looms, which spat out 400 yard-wide miles of fabric every day, a rate of 50 miles an hour. As in Lowell, many of the Manchester buildings have been repurposed as offices, museums, apartments and shops.

Lawrence, Massachusetts is named for Abbott Lawrence who, among others, recognized even more water power could be realized on the Merrimack, at Bodwell’s Falls. The water is captured behind a 900-foot dam chartered by the Essex Company. Finished in 1848, the flow produced an estimated 15,000 horsepower. This area has been designated the Lawrence Heritage State Park, and includes the Immigrant City Archives. These dams were designed to back water up into huge “mill ponds,” allowing a controlled consistency of power to the machines. Lawrence had a slightly different, and mildly sinister, business model: the Essex Company sold “mill privileges” to prospective mill owners. This was a new concept: selling the energy contained in moving water. But how can anyone own and market moving water? The search for an answer involved many court battles.

Manchester, Lowell, and Lawrence were plannedtextile centers; cotton bales went in one end, and fabric came out the other. They were all built from scratch; roads, churches, worker housing, canals, and mills. The men behind these cities were the Boston Associates, who eventually bought and controlled most of the 5000 square miles of the Merrimack watershed and valley. It has been estimated that, when in full swing, the Merrimack River generated more water power than all of France, although how they could calculate this escapes me.

I never thought about this in my youth. I went to high school in Nashua, and worked in one of the converted mills there, but never wondered about the river outside the window. I went to college in Lowell and didn’t study its history. I lived in Manchester and never appreciated the sheer magnitude of the Amoskeag Mills. I became curious about the river when I found some old bricks on the shores of the Merrimack. I like brick, always have. I discovered that these bricks were made from clay scraped off the river bed, and probably fell off a canal barge during transportation to Lowell. Much of the brick in the mills was made from Merrimack clay. Brick keeps architecture on the human scale. The mills may be half a mile long, but are only four stories. The windows are huge, to allow light for the workers, but they’re scaled to the buildings. The bricks are color-matched, so the entire building, even later additions, looks uniform.

Working in the mills probably sucked, but maybe it was better than working the family farm. Slavery sucked as well, and the Boston Associated knew where the cotton came from, and at what cost. But I’ve come to appreciate the beauty of the mills, the concept of water power, the designers of the looms and turbines. I saw a sheet of paper in the museum in Lowell. There was a calculation on it: the water at the falls could power 100,000 spindles. Build accordingly. How could they possibly compute that?

The fact that I never knew about the century from 1830 to 1930 is regrettable. But I seldom worry about the past.