Barreling through Irish touchstones in Queens ahead of St. Patrick's Day. 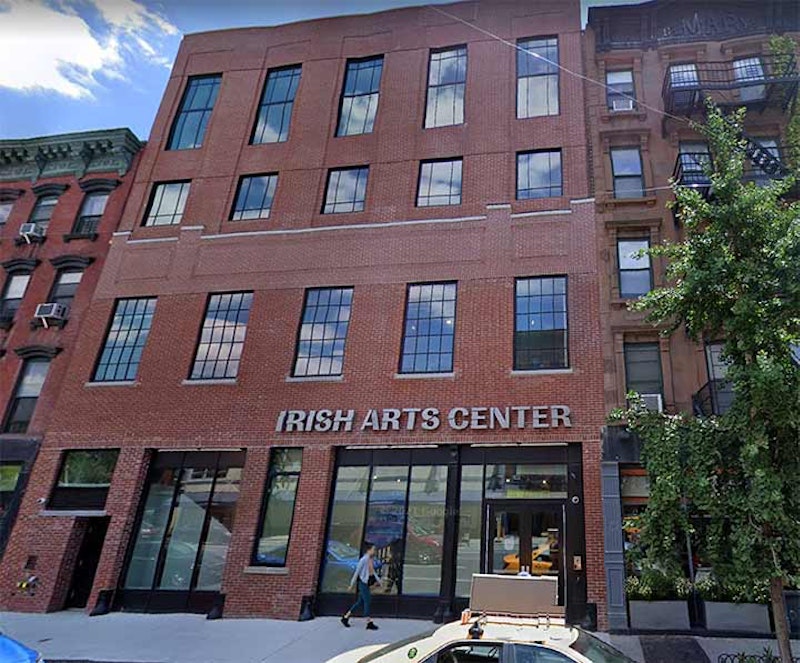 I’ve only marched in one or two St. Patrick’s Day Parades down the Queen of Avenues in midtown Manhattan, as part of a ragtag group of St. Francis College people when I was in school years ago. I don’t recall if we had so much as a banner to carry. I’ve usually contented myself with watching on television, but it hasn’t been the same since Mr. St. Patrick’s Day, Captain Jack McCarthy died. Captain Jack held forth, calling the action as every marching band in the city followed by groups from every Irish county carrying their banners went past in a four-hour extravaganza. At the end of the telecast, Captain Jack would join the parade himself, pep in his step, at least till he got into his 70s. I believe he handled the broadcast every year from the 1950s into the 1980s.

In the summer of 2015 I shuffled down 11th Ave. in Hell’s Kitchen in the heat, checking off the boxes: Landmark Tavern on W. 46th, still there; Mike Quill Bus depot on W. 41st, still there; Market Diner: still there in the summer, but closed in the fall and now demolished; Daily Show studios, between W, 51st and 52nd. 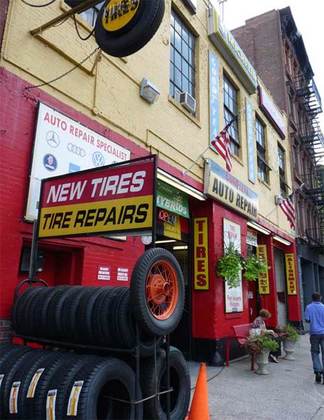 A tire repair shop caught my eye across the street from the studio. It was painted light yellow and occupied a three-story building between the usual tenement walkup buildings with stores on the ground floor. In May 2017 Rooms, a play by Irish writer Enda Walsh opened in the upstairs rooms at what we’ll have to intermediately call the Cybert Theater. Though the tire shop claimed to be the oldest of its type still open in Hell’s Kitchen, occupying the building since 1916, the Irish Arts Center, presently located at 553 W. 51st St., has purchased the property and constructed a new facility where Cybert presently stands. The transformation finally occurred in 2019, with the basic garage building retained and three stories added. As you can see from the photo at the top, it’s considerably blandified. 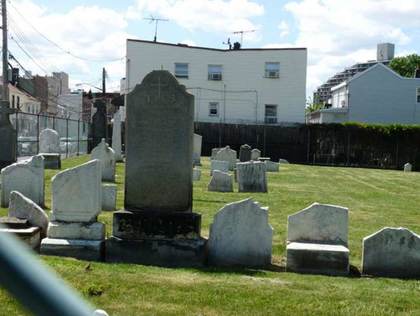 Here’s a friendly neighborhood cemetery at 21st St. (Van Alst Ave. and earlier, Emerald St.) and 26th Ave. in Astoria, known by locals as the Irish Famine Cemetery, though its grounds are well-protected by a chain-link fence that passing photographers have to shoot through, and well-cared for, by Our Lady of Mount Carmel Church. This is the church’s proprietary cemetery and the church itself formerly stood next to the churchyard, though decades ago it moved to its present location at Newtown Ave. and Crescent St. It’s the final resting place of about 100 early Irish immigrants to Astoria, many arriving after the Irish potato famine of 1847. Mass was first celebrated in Astoria in 1835 at the home of a Mr. Tobin by the Ireland-born Rev. Michael Curran, pastor of St. Paul’s in Harlem, according to a history of the church found in the parish archives.

By 1841, there were sufficient Irish residents in Astoria to warrant the building of a Catholic Church. James and Mary Ann Shea, a New York teacher and his wife, donated two plots of land where the original frame building stood. A Mr. Anderson, an Episcopalian, also donated a half lot and the Riker family donated the lot north of the church for burial purposes. The Rev. Curran became pastor of Our Lady of Mount Carmel.

By 1871, the church congregation mushroomed so that its original building was no longer adequate. The cornerstone of the church’s current building was laid nearby as Newtown Ave. and Crescent St., separating the cemetery from the new church edifice. 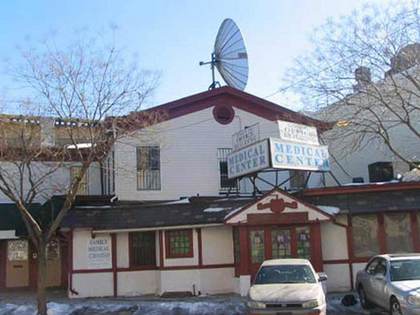 Almost as long as there’s been a Richmond Hill, Queens, the Triangle Hotel building has marked the triangle where Myrtle Ave. meets Jamaica Ave. It was built by Charles Paulson in 1868 and was originally rented as a grocery and post office. By 1893 the building, now owned by John Kerz and operating as a hotel, included an eatery named the Wheelman’s Restaurant in honor of the new bicycling craze. According to the Richmond Hill Historical Society, Babe Ruth (who was a golf enthusiast in nearby St. Albans) and Mae West were patrons of the Triangle Hofbrau in the 1920s. Vaudeville-era pianist/composer Ernest Ball (1878-1927) wrote the music for the now-standard  “When Irish Eyes Are Smiling” in one of the hotel’s guest rooms in 1912. 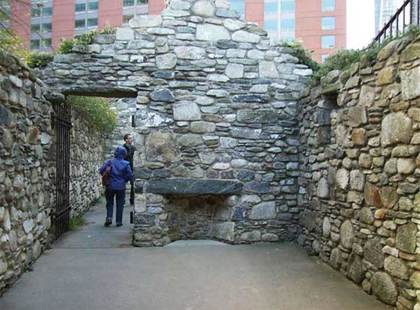 I haven’t spent enough time in Battery Park City, the 40-year-old neighborhood built on landfill above Battery Park, piecemeal beginning in the 1970s. I recently read that the landfill did not come from excavations for the first World Trade Center constructed from 1970-1974. From whence did it come? I do plan on giving BPC a longer, belated look in a couple of years, once there’s some semblance of stabilization from the relentless construction and crowding in the area—if that ever happens.

I’ve done some gradual exploring, though, and there are quiet pockets, such as the Irish Hunger Famine Memorial. The memorial is dedicated to raising awareness of  the Great Irish Famine that killed up to a million in Ireland between the years 1845 and 1852, and the resulting waves of immigration to the United States beginning in those years. The Memorial occupies a half-acre at North End Ave. and Vesey St. and was  designed collaboratively by artist Brian Tolle, landscape architect Gail Wittwer-Laird, and 1100 Architect. It was dedicated on July 16, 2002.

The landscaped plot employs stones, flora and soil imported from the western coast of Ireland, and incorporates a 19th-century Irish cottage. The names of some of the immigrants are displayed on the sides of a lengthy corridor, a dark passageway that leads to an open space. Visitors can mentally shut off the traffic noise and pretend they’re on a high hill in the western counties. Following the famine, 800,000 Irish immigrants found their way to the United States, a large percentage of whom settled in New York City. 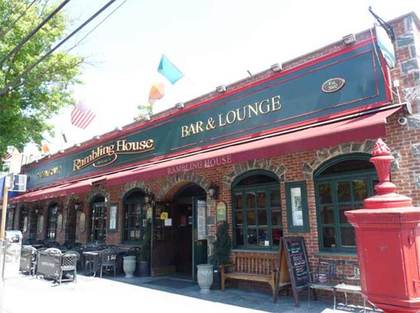 Woodlawn, or Woodlawn Heights, is a parallelogram of territory defined by the Bronx River, Van Cortlandt Park, Woodlawn Cemetery, and the Bronx-Westchester County Line, which forms the northern boundary of VCP but runs across several cross streets here. The neighborhood has several colorful street names, such as Kepler, named for the German astronomer Johannes Kepler (1571-1630); and Vireo, the small woodland bird (many Woodlawn streets once carried birds’ names such as Quail and Sparrow).

The main shopping street, Katonah Ave., is from a Native-American term meaning “great mountain.” Woodlawn Heights and southern Yonkers are located in a hilly region. Apparently, the avenue and the mid-Westchester County town were named independently.

According to The New York Times in 2011, 44 percent of Woodlawn’s population was of Irish extraction. A look at the businesses along Katonah Ave. bears this out, with even the deli awning signs showing a harp or a shamrock. Woodlawn has been Irish since the 1840s, when Irish immigrants joined gangs building the Croton Aqueduct from several miles north down to the former reservoir where Bryant Park sits now. Woodlawn’s Irish population is always prominent, but ebbs and flows in conjunction with Ireland’s economic situation: when it was flying high in the 1990s, it decreased here but when it guttered in the 2000s, more Irish arrived.

Pubs, almost all of which display the Irish tricolor in addition to the Stars and Stripes, come thick and fast along Katonah Ave.. The most well-known is likely the Rambling House, which has played host to Irish-American former City Council president Christine Quinn, as well as Mayor Bloomberg, when they visited the area. In Woodlawn, the Emerald Isle Immigration Center, and in Yonkers, the Aisling Irish Community Center, attend to the needs of recent Irish immigrants. Surprisingly, most Irish expats now travel to Canada, New Zealand or Australia, since their immigration laws are not as arduous as the USA’s.