Zsa Zsa and Me

People are sometimes hustling for soul. 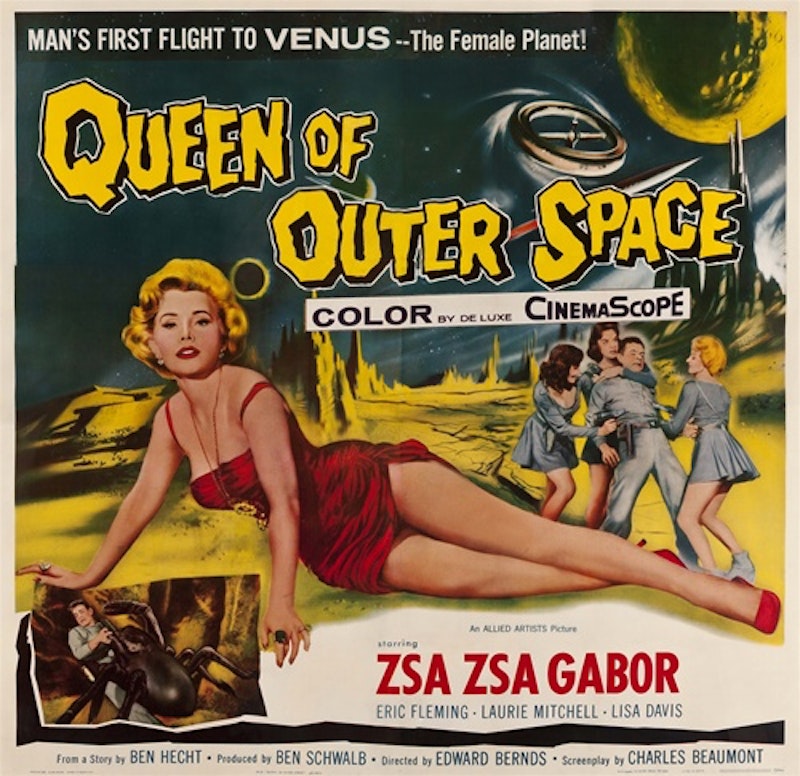 I first came across a sizzler called Such Devoted Sisters: Those Fabulous Gabors in the late 1980s, and the book just slayed me. Magda, Zsa Zsa, and Eva were born in Budapest in the late-1920s and early-30s, to mother Jolie and her lame husband Vilmos. Jolie was a frustrated actress, and the girls were furiously groomed to enter society as the best companions a tycoon or ambassador could hope for. The first Gabor I ever saw was Eva, on Green Acres—she threw the dishes right out the window so she didn’t have to wash them! The comic timing, the hair, a disciplined structure of white gold, the chiffon, the make up—this was beauty to me, still is.

In the years in between early television and the Internet, I got into the Marx Brothers for a minute, and also saw clips of Zsa Zsa on quiz shows, a quick-witted stage version of a ruthless courtesan, and as I cracked up I knew in my soul that this was glamour, and glamour doesn’t come easy. It’s not normal, well-balanced, or in therapy, though it can be in jail, as she briefly was after slapping a dumpy nothing of a traffic cop in Beverly Hills.

It doesn’t take too much research to find out that Zsa Zsa was what they’d call “bipolar” these days. It’s always so triumphant sounding, like the key to a solution—“my ex-wife is Bipolar!” but in other days there were different words or no words and it’s a hard diagnosis to live with. I’m guessing Zsa Zsa was spinning out pretty badly when she flung her valuable jewels out the window of her Bel Air home, a renunciation of everything her life was about. Then the fits, the happy pills, the straight jacket, and getting sprung. Nowadays they say ECT is a much more delicate instrument, fine-tuned tinkering with just one side of the brain, but a lot of difficult ladies were given the strong stuff, old fashioned Shock Therapy, a hammer to both sides of our heads, when we/they couldn’t shut up or escape. Close call.

Dr K, my playful transwoman medication doctor in New York, only recently brought up the idea of “bipolar” with me a few months ago, sandwiching it between our urbane banter. That’s how relatively lightly I’ve been handled, helped, and steered. I couldn’t leave my apartment much for about eight years, so down, trying to hide it until I couldn’t anymore. When I run into former students from Marymount Manhattan they say, “We were so worried about you!” I was trailing in, sitting in the tiny chapel for solace, disorganized, but due to the corrupt adjunct system of complete negligence I hung onto that job for about five semesters, finally toppled by an unwholesome appearance on HBO rather than my near complete failure as a college teacher.

Desperate, I took all my money—$150—to an internist in the West Village and asked him to test me for every disease, ‘cuz I just wasn’t making it. He sported me a bottle of Prozac, and it helped. Helps. A couple of times I’d be at my clinics shaking, unable to solve problems, and ask about going away somewhere—“They’re really pretty bad places, Jennifer” the low-paid clinicians warned me. “Can I help you send a fax? X-ray your ankle?”

When I spent a missing couple of years on anti-psychotics, I met a reader of my old Maximumrocknroll column, and he was training to be a social worker. “You’re not psychotic, you’re counter culture!” he sputtered, pained at watching me be a zombie on Zyprexa, Risperdol, what have you. I went off the mind-numbing stuff. I stop anything when my cognitive powers slip. The thought that I may be bipolar stings, it’s such a tired label, and I’m glad that Zsa Zsa was never saddled with that one.

The men Zsa Zsa liked were smart, and good at living in the world—the Ataturk, actor George Sanders, and an Argentine polo player called Porfino Rubiroso who seemed to have every high profile woman he wanted. The man at the end was a sad case, the self-named Prince Frederick Van Anhalt III—he chose the first name of Prince as it was royal sounding, bought a knock off dukedom, and insinuated himself into her life when she was very old and he still had some game. What a jackass! Zsa Zsa was almost comatose the last decade or so of her life, and had a few head injuries, and he pulled such classy stunts like trying to have her frozen and propped up at the dinner table (not in the will I’m guessing).

He held two-bit press conferences in Palm Springs and suggested he was the real father of Anna Nicole’s child, had some love connection with Paris Hilton, a relative of one of Zsa Zsa’s earlier husbands, Conrad Hilton. At some point every hustler slips up and marries another hustler, and Palm Springs must be crawling with them, waiting for the first sign of dementia to make the moves. Hell, I know guys who’d be with a woman just to get out of the rain. Elder abuse happens all the time just for rent-controlled one bedrooms, but the cryogenics bid by Van Anhalt III was really low. Zsa Zsa had to know how sad and terrible this final husband was. When she could speak clearly, she was a lady who’s spurned Frank Sinatra, who was not her idea of class. George Sanders was articulate, abusive, alcoholic, and a working movie/stage actor. Sometimes straight people are just in a fetish relationship without the word “play” involved, though, and they had that going on. As for Porfino, the Argentine polo player, let’s face facts—that guy knew how to make a woman feel good, and he didn’t need any place to live.

People are sometimes hustling for soul, or because they were born to hustle. My late “lady doctor,” a glam Viennese who piled on the make-up, had a receptionist, Scott. He looked and sounded like a soap opera actor, and he broke down when she passed away—he lived with Dr Mary, had sex with her, went with her to the doddering private club she belonged to and partied with the glam seniors of another era, because he had no problem with that. He loved the set-up, he loved her, she loved him, he is a fan of the eccentric woman and a gigolo and if I was any kind of playwright I’d have taken him myself, because he says more cool and wild shit in his salesman-on-acid voice, reliably, than most people say in a lifetime.

I had a gigolo, a “location whore,” and maybe he was worth it but he would have also killed me. Ghetto Clooney wanted my apartment without me in it, but there was something else. He gave me some mojo, and he knew how. Women are an inside job, it’s how men make us feel that’s sexy, and that’s an almost intangible skill and the same application, craft, and drive is brought to that skill as to anything worthy. So he was both—some good inspiration, and a downfall if I let it be. But man he was good company for a while there.

I feel the Gabors were here to be good company. Eva was Merv Griffin’s close friend and “beard”—they could attend functions as a straight couple! He was so gay and everybody knew it, but was a master negotiator, showman, just all around brain. Merv won the game of life and chose Eva as some kind of platonic playmate. His jacket lining alone inspired standing ovations and devout loyalty. Diamonds and languages, the Gabors were nobody’s fool, right up until Zsa Zsa caught Alzheimer’s. I’m poor but smart, and when I need a little pick-me-up I leaf through my extensive Gabor archives.