Christie Brinkley and Her Knees Back in the 1980s

Plus David Byrne and his voice. 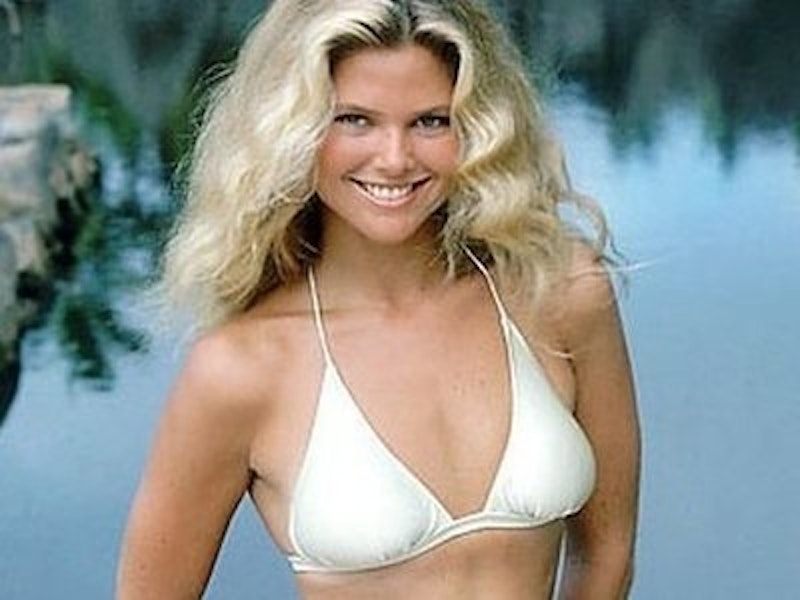 Blondes used to stride the pages of the magazine. To read it—glance at it—was to look at teeth and vibrant sheets of hair. During the 70s the blondes on view advertised California and/or good health (Cheryl Tiegs, Farrah Fawcett, Cheryl Ladd). During the 80s there was Christie Brinkley. Possibly it was her and nobody else. She seemed like a crowning of the type, as if the blonde makers had decided to outdo themselves and present a supreme example.

The 80s were like that: everything became glossier or more jacked-up or bred with only the type’s prize qualities. Prince was an example: a champion hybrid of Hendrix, James Brown and half the Brill Building. The record sales of Thriller and Born in the U.S.A. were examples. Sylvester Stallone’s physique was an example, and so were Christie Brinkley’s legs and It by Stephen King and the Indiana Jones movies. Everything good was to be present in quantities and to degrees never known before. The ratchet of the possible was being jammed upward.

My contact with the new possibilities took various paltry forms. One of them was this: to look at a pair of kneecaps stationed so far above and so far below the end-points of a woman’s legs. A dumb issue of People lay open before me. In one bathroom or another, next to one mattress or another, I leafed through pages and hunted material, and in the end maybe the extended legs and a woman in the full-page ad for Revlon Flex for me to have a go. But that’s not how I remember it. Either way the 80s passed me by.

Artsy fog horn. When I think of the 80s, I think of a distant blimp hanging over green countryside. This is eccentric, but what do you expect. I was parked off to the side. I didn't experience the cocaine and debt and good money. I read about big people in magazines, and I went to Tower and bought cassettes.

David Byrne was a very big man of the day, and he deserved it. But I have an odd bias against him. It shows up in this way: when I hear lines read by Byrne, I cringe. To understand why, find The Knee Plays. Life wilts at the sound of that voice.

I noticed this 25 or 30 years ago, and it’s a fact I keep tucked away. Now and then, every few decades, I consider the Byrne phenomenon. When I do, I append this note: his voice, aimed into a microphone and speaking words, is a solemn trudge that makes something painful out of the deadpan and off-kilter. Every imitator of the Talking Heads risked moments like this; many imitators perpetrated them wholesale. So did Byrne. Not when singing, but here, when he had lines to say. He tried too hard. Even David Byrne could try too hard, and that fact provides scale for everything else.