Celebrity Sightings of the Highest Order

I’ve only been star-struck twice. 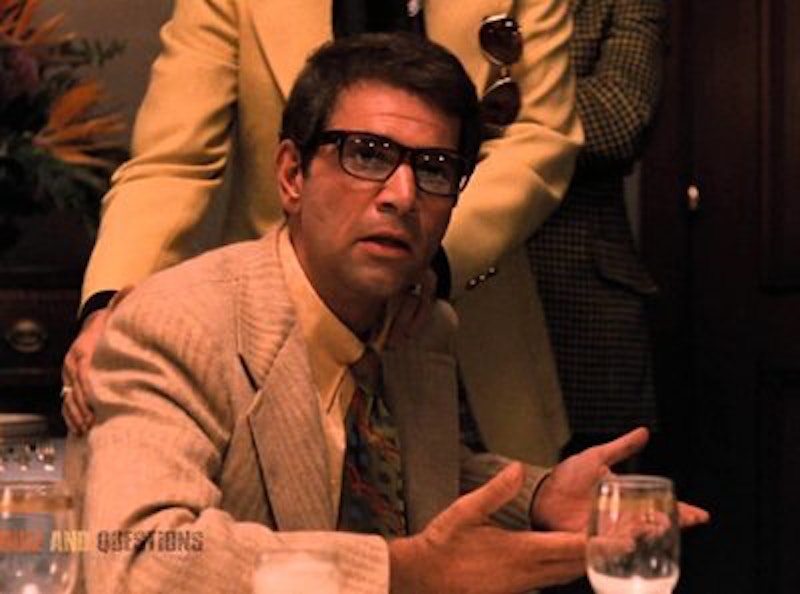 Living in Los Angeles, you get used to seeing celebrities. When I was in my 20s, my roommates and I kept a list of celebrity sightings on our refrigerator door. We rated the sightings on a scale of one-five, based on star status, location and details. The best sightings were the obscure ones, the moments that bordered on surreal. Five-star sightings included seeing Tom Waits eating a cheeseburger at a downtown Tommy’s, Billy Barty buying Rolaids at a 7-Eleven and Sophia Loren shopping for produce at local Ralphs. A meager sighting like Eddie Murphy driving his Rolls Royce down Sunset Boulevard earned just one star.

One night I was having dinner with my parents at an Italian restaurant off in the hills. A man started coughing at a nearby table. It became clear he was choking. One of his fellow diners patted him on the back and the man spit out a large piece of steak. As he regained his composure, I realized the man was Alex Rocco, the actor who played Moe Greene in The Godfather. This was a sighting of the highest order.

I had another Godfather sighting in the 1980s. I was having my brakes fixed at a Studio City auto shop when in walked Abe Vigoda. His car was also in the shop and we sat together in the waiting room reading old magazines. I was about to quote a Godfather line aloud to him (“Tell Mike it was only business”) when Vigoda got up for some coffee. He became irked at the lack of half and half at the coffee table. He looked at me and grimaced. I kept my mouth shut.

After graduating college, I had a video business for a few years, taping weddings, bar mitzvahs and parties. One night I was paid to record a charity fundraiser at the Beverly Hills Friars Club. Several celebrities attended including 82-year-old Milton Berle. Berle told a few bad jokes, urged the crowd to donate money then walked off stage. At the end of the evening, he came up to me as I was putting away my equipment.

“What are you going to do with that tape,” he asked. “It’s for the charity organizers,” I told him. “You know who I am, right,” he asked. “Of course, Mr. Berle.” “If that tape ends up on television or if I find out you’re selling it for a profit, you’ll never work in this town again.” “Yes sir, Mr. Berle.” He walked away in a huff. (Three stars plus two for the fact I was threatened.)

Some of the most memorable sightings involved film personalities I admired. I saw Faye Dunaway getting yogurt at a kosher dessert shop in Hancock Park. I sat in a booth near David Lynch as he sipped “damn good coffee” at the Burbank Bob’s Big Boy. I looked on, mesmerized as German acting legend Bruno Ganz flossed his teeth outside a West Hollywood taco stand.

I’ve only been star-struck twice. Both incidents involved players from my beloved Los Angeles Lakers. Once I stood behind Magic Johnson at a Starbucks on Melrose. I wanted to tell him what a huge fan I was. Instead, I merely shook in my shoes unable to find words. Years later, I met a friend for dinner at a valley Thai restaurant. The place was packed and we were led to a table in back right next to Kareem Abdul-Jabbar. His absurdly long legs stretched to the edge of our table. I waited for him to finish his meal and then found the courage to thank him for the joy he’d brought me. He said, “You’re welcome,” nodded, and left.

Inevitably I’ve had a few sour celebrity encounters. When I was in my 20s, I worked at a spiritual bookstore in West Hollywood. Film director Peter Bogdanovich was such a profound prick toward the staff we wanted to kick him out of the store. Action film director Brett Ratner almost drove me off the road on Mulholland. Actor Jeremy Piven once cursed at me at a market for having too many items in a 10-items or less line.

The strangest celebrity sighting was not a celebrity sighting at all. In the 80s, I used to get my hair cut at a salon on Ventura Boulevard. There was always an old man seated on a couch near the front door. I assumed he was related to the owner but one day my barber pointed to the man and said, “You know who that is? That’s Larry from The Three Stooges.” I stared at the man. He looked nothing like Larry.

I drove to the local library and found a book on the Stooges. I learned Larry died of a stroke in 1975. He was born in 1902. He’d been a talented violinist, was once a boxer and spoke fluent Hebrew and Yiddish. His real last name was Feinberg and he had burn scars on his right arm from a childhood acid accident.

When I returned to the salon for my next haircut, I found the old man seated on his customary spot on the couch. My barber was finishing a haircut so I sat next to the man. I looked at his arms. There were no scars. “How are you, sir,” I asked the man. “Wonderful,” he said with a New York accent. “Tony tells me you’re a famous Hollywood actor,” I said. The old man smiled. He looked toward the movie star photos on the nearby wall. “Are you up there,” I asked. He pointed toward a photo of the Stooges. “I know you’re not Curly. And you don’t look like Moe. Are you Larry?” “I’m Meshugah,” he answered. I knew enough Yiddish to know this meant “crazy.” I smiled and shook his hand. This was truly a five-star sighting.