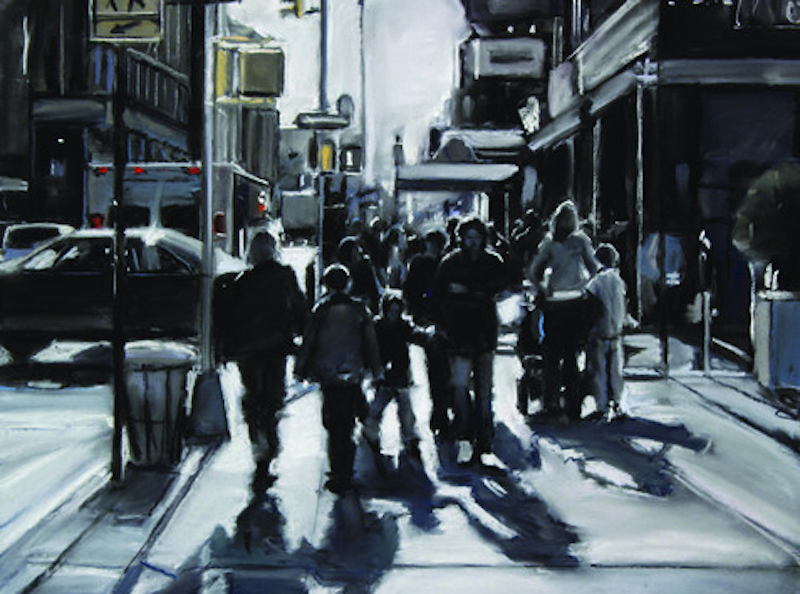 All sidewalks are not created equal. Big- and medium-city sidewalks are wide, huge things, the kind where lazy action-movie directors will stage impromptu car chases that cause extras to scream and flee in terror. These are what we might call ideal sidewalks, because they’re roomy enough for skateboarders, bicyclers, and pedestrians to co-navigate (usually) in various directions, in peace. But not all sidewalks are ideal sidewalks, and many of us live in places where sidewalks are wide enough—or barely wide enough—for two people to walk comfortably, side by side, in the same direction. These might be thought of as traditional sidewalks. This article is intended as a primer for those of us walkers—skaters, bikers, and runners, you’re cool, no worries—who must live with and travel upon traditional sidewalks, and while much of it may scan at first blush as common sense, it’s worth remembering that few municipalities provide sidewalk user guides.

Rule #1—Eye Contact. You don’t have to make eye contact with people you don’t know, or whom you want to pretend you’re unacquainted with, but it should be noted that while eyes, famously, are a window into the soul, the probability that another person will possess the ability to stare through your eyes and actually purloin your soul is very, very low.

Rule #2—Greetings. You don’t have to talk to other people who you pass on a sidewalk, even if they talk to you. Most of the time these people won’t even say anything meaningful, they’ll just mutter a pleasantry. When this happens, smiling guardedly is a cool, acceptable thing to do. Who doesn’t enjoy being randomly smiled at, even if that smile is barely even a smile?

Rule #3—Smart Phones. You’ll probably be screwing around on your smart phone (or possibly speaking into it) while walking a sidewalk, which is fine, but that doesn’t fly as an excuse to not notice that others are on the sidewalk and to fail to move to a little to one side or the other if you’re in the center. A sidewalk isn’t really a road, except, you know, when it is.

Rule #4—A Word About Dogs. Dog owners: have a good grip on your dogs and keep them out of the immediate paths of strangers. Strangers: give the dogs and their owners a wide berth, and don’t try to pet dogs you don’t know.

Rule #6—Food. Eating food while walking on a sidewalk is a bad idea for various reasons, but your parents probably already told you this.

Rule #7—Drink. This is okay, as long as it’s non-alcoholic or safely disguised by a paper bag. Approaching strangers who are belligerent may ask you to share; politely decline.

Rule #8—Traveling in Packs. Traveling in a loud, hormone-fueled pack—possibly horsing around, break dancing, or playfully shadowboxing with someone you secretly want to sleep with—doesn't give any of you the right to pretend that you aren't sharing the sidewalk with other people. Please: remember the faces of your fathers.

Rule #9—Traveling in Pairs. The dumbest game that children and politicians play is “chicken,” as when two combatants charge at one another. The goal of the game is to see who will flinch and swerve out of the way first. If combatants maintain their resolve, they’re both winners, but they’re both bruised, which is utter idiocy. This particular rule seeks to eliminate a similar, though less antagonistic principle, wherein two parties—let’s say that one party consists of one person, and the other party consists of two people—approach one another from opposite ends of a sidewalk. Regardless of how engrossing your conversation is, everyone should have the good sense to make room for the person approaching from the other direction, possibly by briefly interrupting said conversation and walking single file for a couple yards if necessary. Unless I’m delusional, and this is a concept that’s painfully impossible to grasp.