Calamity at the Ski Slopes

I now stay in the lodge by the fireplace, a contented snow bunny. 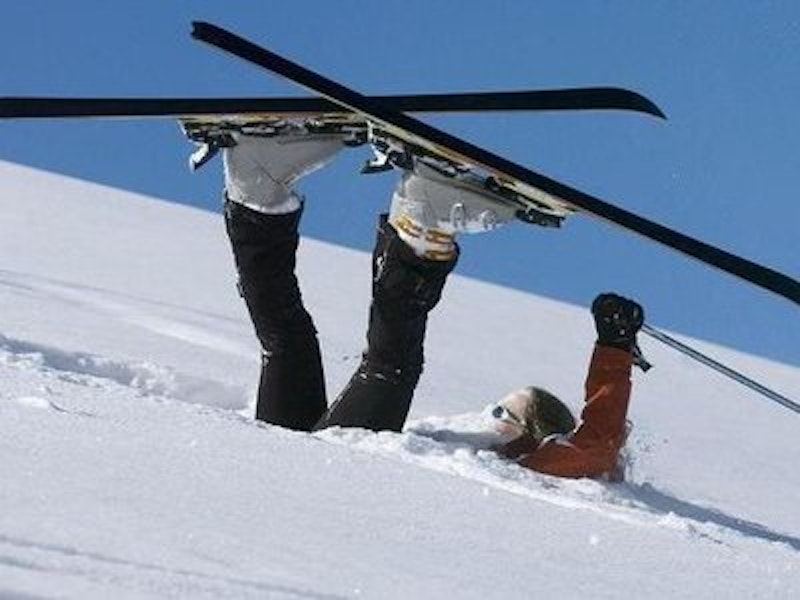 “Hey, Morgan, why don’t you come skiing with me and some friends?” That was from my green-eyed Berkeley roommate, Sue, one long-ago January in 1972.

“I’ve never skied before, so are you sure you’d want me around?” I asked.

“Of course! I’m not a real ski bum either,” my friend said. “And you can always take lessons.”

“Well, I guess I should try it. You see, I’ve never been very athletic. In fact my mother, my stereotypical over-protective Jewish mother, didn’t want me to get hurt doing things like jumping rope or roller skating, so no one ever saw little me engaged in any one of the normal activities kids do. Skiing is very scary. But I’ll do it!”

The following Saturday, I started out for Squaw Valley with Sue, Marie, Joey and Mike in Mike’s 1963 green and cream-colored Chevy. No one had thought to ask Mike when he’d last had the car serviced or the tires checked. So somewhere around Roseville on Rt. 80, more than halfway to our destination, the car skidded on a patch of ice and nearly went over an embankment.

“Oh-ma-god!” I shrieked. Since it was my turn to sit in the front next to the driver, I was first to see the car hanging over the precipice. This is it! I thought, absolutely terrified. Fortunately, the car stopped on that spot, front wheels dangling over the cliff. What did one do in such a predicament before cell phones? Stand next to the car and wave to passing vehicles.

“Do you really think someone’s going to pick up the five of us?” I asked no one in particular.

“Well, what else would you suggest?” Joey queried. That stumped me, so I shut up. Soon a red 1969 Ford Econoline stopped and the driver, a paunchy balding guy, offered some assistance. “I’m a CB-er, so I’ll call for a tow truck for ya,” he said. And he did.

The next stop was a filling station with a mechanic who pronounced the tires “bald” and the price of four new tires a lot more than Mike could handle. “I must’ve been an idiot to get myself into this,” I thought, but I doled out my share of the cost, as did the rest of the crew.

“I’m already exhausted, and we haven’t even been skiing yet,” Sue confessed to me as we unpacked our one suitcase each. That was all that would fit into the trunk of Mike’s car. “Me too!” I groaned, “I know I’ll sleep well tonight.“ And I did. After a big breakfast the next morning, the whole gang headed over to the ski rental shop. “Should the boots feel this terrible?” I asked after donning the heavy clodhoppers the attendant handed me in exchange for my sneakers. “They generally press in all kinds of weird places,” Mike told me, as he paid for the rental of his boots, skis and poles. “Oh, no,” he then whined, loud enough for us all to hear. “I really don’t have much money left for the trip home… Can any of you spare a buck or two?”

After a few dirty looks from everyone else, Joey pledged his support. “Thanks, Joey, I knew I could count on you.” I rolled my eyes, catching Sue’s. She smiled, raised her auburn eyebrows and shrugged her shoulders. Then we were off to the ski slopes. Since I was slated for a lesson at 9:30, I rushed to the meeting place and strapped my rented skis onto the pain-inducing boots. “We’ll begin here,” said Brad, the blond, brawny but bored-looking instructor, pointing to what was locally known as “the baby slope.”

“Keeping your skis tilted a bit, step upwards sideways, like a crab,” he coached, demonstrating the motion. “That’s how you’ll get to the top of this hill.” One by one we did as instructed. Scarcely hearing what Brad said due to my nervousness, I began my first descent. Then down I slid, out of control. Finally, poles held out parallel to the horizon, I smacked into a middle-aged man at the bottom, knocking him over. Of course I fell right on top of him. But fortune was with me for I didn’t gouge him with my ski poles. Blushing with embarrassment, I apologized.

But the guy, who looked like my Uncle Morris, smiled up at me and asked me to join him for a drink later at the bar. “No thanks,” I mumbled, “I think I’m going home.” I realized at that moment skiing wasn’t for me.

Skip ahead four years. I’d been dating Art since we’d met that past summer at a singles' resort on Lake George, which is about three or four hours from New York City, where I was living at the time. Art and I seemed made for each other—I made a mean marinara sauce, and he cooked pasta al dente to perfection; his penis was enormous, which perfectly fit my outsized pussycat; we both had Jewish mothers, only his wasn’t overprotective. So naturally he’d learned to ski and loved it, often telling me stories of his adventures on the slopes. I’d told him mine too and also said that I didn’t plan to ski ever again.

But Art convinced me to try again. So that December, after the first big snowfall, we set out together towards Saddleback at Rangeley, Maine in Art’s brand new Volvo 140—which had four excellent tires. I made sure that Art had them checked before we left. “This car has only 4000 miles on it,” Art grumbled, but he’d obliged my paranoia. Our 10-hour drive to Saddleback was incident-free. And since we had reservations at a nearby resort called The Country Club Inn, we had a fine dinner there and retired to our comfortable room for the night.

It wasn’t until the next morning that my troubles began. Art had brought his skis and related paraphernalia with him, but reminiscent of my first skiing experience, we stopped at the ski shop to rent my equipment and make an appointment for my beginner’s lesson. Art walked me over to the spot where I was to meet my ski instructor and the other would-be-skiers taking the lesson, and said with a big smile, “See you later, Hon.”

“But I thought you were going to guide me all the way,” I gasped. “Nah, there’s no need. This lovely man, Kurt,” he said, reading the instructor’s name tag, “will take good care of you. I’m off to ski the double black diamonds.” And off went Art, leaving me to the mercy of Kurt and the gods. Amazingly, once I’d calmed down and concentrated on the task at hand, I did pretty well on the baby slope, walking up sideways and skiing down the nearly-flat slope. The slope didn’t actually slope very much. But I felt happy. “Now,” Kurt explained to the group in his European accent, “Vee vill go to zee next slope and take zee rope tow.” Obviously this was a larger slope if we needed the rope tow. But I felt I could do it.

As we walked to this slope, which became bigger and bigger in my mind with every step, the binding on one of my boots came undone. Of course I had to stop to fix it while the rest of the group walked on, and became more and more anxious. Then with the binding back in place, I hurried as best I could to the slope, watching from afar as Kurt was demonstrating the proper way to accomplish the ascent. By the time I reached the rope, the group was already gliding smoothly uphill. So I quickly grabbed tightly onto the rope. Wrong! But I didn’t know that. I learned later that I should’ve held on loosely and let the rope slide against my palm. I instantly flipped over sideways to the ground. This time my binding didn’t open, and as I landed on the ground I felt a searing pain in my right ankle.

Kurt spotted me lying on the ground and gave me a hand to get up, but I was in too much pain to move. Pretty soon the ski patrol arrived and lifted me off the snow, probably the first time they had to rescue a skier at the very bottom of a slope. But rather than feeling mortified, I was grateful for these saviors who carried me into the infirmary.

Amazingly, Art appeared at my side, looking worried. Though I had no idea how he knew I’d been injured, I was glad to see a tender look of distress on his face. It told me that he cared. I soon learned that my right lateral malleolus was fractured, and so I went home wearing a cast, which had been signed by Art, Kurt and the rest of the beginners from his group. “Never again,” I told Art, and this time he didn’t argue with me. From then on, whenever Art wanted to go skiing, I went along for the ride and stayed in the lodge by the fireplace, a very contented snow bunny.