As I saw those sharp teeth and menacing eyes, I was terrified. 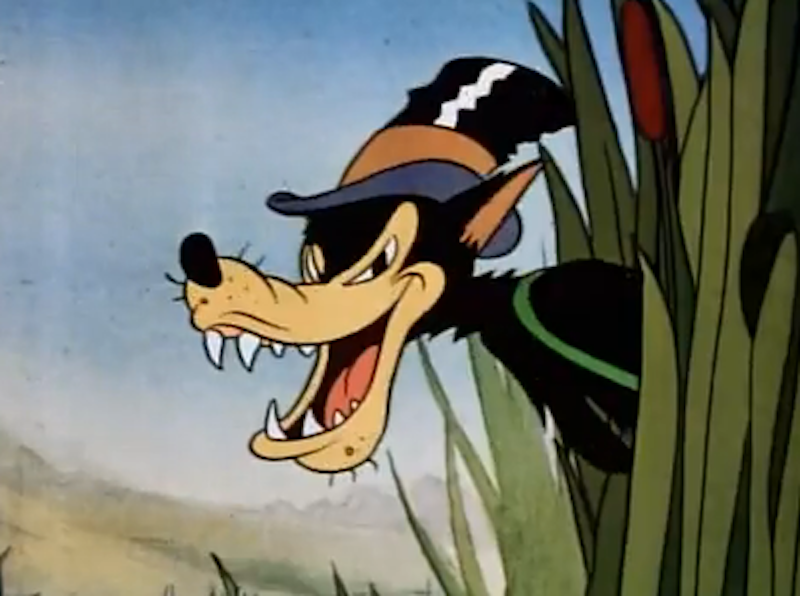 When I was a boy, I was afraid of the Big Bad Wolf. It started when my dad brought home a Three Little Pigs record album, a Disney promotion he’d received for filling his tank at a Union 76 station. He left the album on my bed and as soon as I saw those sharp teeth and menacing eyes, I was terrified.

My brother Mark picked up on my fears and began singing, “Who’s Afraid of the Big Bad Wolf,” happy he’d finally found a way to get back at me for all the times I called him “fatso.” Mark wasn’t scared of cartoon wolves. His phobia was clowns. He was still pissed at me for the time I ran around the house with a Bozo mask yelling, “Give me a kiss lard ass.”

On my sixth birthday, my parents took me to Disneyland. I met Mickey, Donald and Goofy and as the day wore on, I remember thinking “This is the best day of my life.” That all changed somewhere between Main Street and Sleeping Beauty’s Castle. I was sucking on a jawbreaker when I saw him striding over a small bridge. His teeth were sharp as nails and his lips appeared to be smeared with blood. It was the Big Bad Wolf. I spat out my candy and hid behind my mom’s legs.

The beast continued towards me, passing one of the little pigs without a glance. I tried screaming but I couldn’t get air into my lungs. Mark stepped forward and grabbed the Wolf’s gloved hand.

The last thing I remember before passing out was a huge rubber snout lunging towards me. The nightmares began soon after that. I’d awake in a cold sweat, breathless, having just evaded the Wolf in some dark forest.

It got so bad my mom took me to see a child psychologist. The doctor asked why I couldn’t sleep but I was afraid to tell him. Somehow I surmised that I had to keep silent or the Wolf would avenge himself on my entire family.

Even my walks to school became an ordeal. I was afraid to pass thick hedges in case something was hiding behind them. I avoided flat rooftops since only part of the roof was visible and who knew what might be lurking on the other side. God forbid some kid wore red suspenders to school. On those occasions, I feigned sickness and waited in the nurse’s office for my mom to come get me.

I even thought I saw him once. I was seven and lying in bed when I heard a knock on the window. I knew something was wrong but couldn’t stop myself from getting out of bed and treading across the thick shag carpet. I pulled open the heavy green drapes and there he was, in all his Technicolor glory, standing on our front lawn. He wore his familiar white gloves and green top hat and flashed an evil grin. As I stared in horror, he lifted his right arm and pointed his index finger at me.

I screamed and ran into my parents' bedroom. My mom, thinking someone had broken into the house, sprinted into the living room with a hair dryer, yelling at the top of her lungs. I’m not sure if she planned to blow dry the intruder to death but after several minutes of heaving breathing, I told her I’d had a bad dream. I kept the news of the Wolf to myself thinking a chatty child would be a dead child.

Years later, a therapist inferred that the Wolf embodied an Oedipal fear of my father turning on me for me loving my mom too much. Of course, that same therapist theorized that I viewed myself as one of the little pigs at which point I paid him his $120 bucks and discontinued therapy.

Those were the days of the Manson murders, which put my neighborhood on edge. This only exacerbated the fear that was already present inside me. Perhaps it was my parents’ constant fighting or my mom’s depression. I constantly thought of death and darkness and feared that tragedy was around every corner.

When I was eight, my younger sister Lisa was diagnosed with cancer. She endured surgery and a one-pound tumor was removed from her stomach. My mom, who’d lost her own sister to cancer as a child, spent a round-the-clock vigil at the hospital, refusing to leave my sister’s bedside.

My brother and I were allowed to visit Lisa on weekends, but our parents told us little about her condition. During one of these hospital visits, I wandered down a corridor in search of a bathroom. I passed a room with an open door where I saw a young woman with a shaved head lying in a hospital bed. Sensing my presence, the woman smiled and gestured for me to enter. As I reached her bed, she stretched out her hand and touched my fingers.

“It’s such a beautiful day,” the woman said. “Do you think you could lift the shades?” I moved to the window and let the sun inside the room. As I returned to her bed, I saw my mom staring at me from the open doorway. She apologized to the sick woman for my presence. “It’s okay,” the woman said. “He has so much life in him.”

My sister came home from the hospital a week later. She was lucky. Though she’d have six months of chemotherapy, her illness had been caught early. For the next year, we emulated a happy family. My parents stopped fighting and my mom’s outlook brightened. Mark and I watched over my sister as if she were a young puppy. Around that time my dreams of the Big Bad Wolf came to an end. I had other things to worry about. I had just seen The Wizard of Oz and those flying green monkeys were starting to keep me up at night.