Burden of an Empire 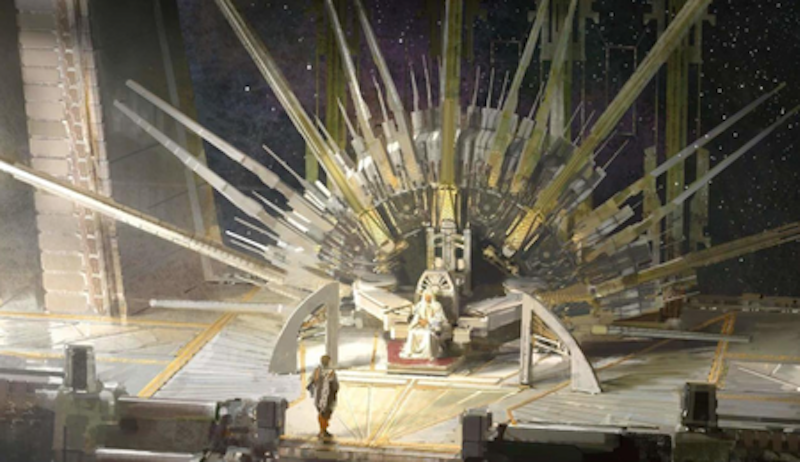 Once, writing about a science fiction novel meant discussing the book in the context of its genre. That’s not enough any more. Science fiction’s become mainstream—TV shows like The Expanse or The Man in the High Castle are both adaptations of SF novels. To say a story works as science fiction now raises the question of whether it’ll also work for a general audience, and if not, why not.

Consider the first novel by Arkady Martine, a veteran SF short story writer and poet. A Memory Called Empire drew starred reviews in Publishers Weekly, Kirkus, and Library Journal, along with puff quotes from a number of science fiction luminaries. You can see why. It’s an entertaining, inventive space opera about an ambassador at the court of a sprawling interstellar empire. But the way it depicts human character and structures its story strikes me as more appealing to SF fans than a general audience.

The story opens with Mahit Dzmare, a young representative from an independent space station, on her way to the city-planet at the heart of the Teixcalaanli Empire. There she’ll find mystery, intrigue, and what looks like the murder of her predecessor. Dzmare has to find her way in the warlike culture of the Empire, which is threatened by questions over the imperial succession and a populist general who may be about to raise an insurrection—and meanwhile a piece of technology implanted in her brain, containing a recording of the personality and memory of the previous ambassador, is malfunctioning in alarming ways.

Martine’s prose is swift and rhythmic, though it uses italics for emphasis more than necessary. There’s a considerable amount of exposition, mostly worked well into the unfolding of the story. That story has promise: incidents quickly following upon incidents. Over time, though, the connections become diffuse. The intrigue’s not gripping, bombings and riots and fancy-dress parties remaining single data points rather than tightly-linked parts of a whole.

Some of that’s because Dzmare herself bounces from event to event. She’s effectively kidnapped by a Teixcalaanli aristocrat named Nineteen Adze, and puts up little objection. There’s no attempt at escape or at establishing an independent power base. Dzmare’s given a Teixcalaanli aide and worries that the aide’s a spy, but does nothing to establish her reliability or lack of same.

In general characters are cerebral in a way that undercuts drama. It’s appropriate for high-level diplomats and courtiers to be highly intelligent, but there’s a distinction between intelligence and rationality. There’s a lack of naked lust for power, of score-settling and sadism, that doesn’t square with what I’ve read and heard of the inner circles of government.

This is what I mean when I say this is a story that has more of an appeal to science fiction fans than to a general audience. Cutthroat politics go on in the background of the novel, but we don’t get much of a view of them. The broader life of the Empire doesn’t come alive; we meet educated upper and middle class characters almost entirely, with only minor appearances by soldiers, laborers, and dedicated political activists. What’s foregrounded in Game of Thrones or The Expanse is background here not only in terms of conflict but in terms of scope.

It’s possible to argue that A Memory Called Empire just isn’t that sort of story. Certainly Dzmare’s story and perspective is more YA inflected; she and a couple of plucky friends are adventurous young people trying to solve the mysteries they’ve been stuck in by their elders. There’s little sex, and a romantic twist at the end feels tacked-on. The book creates a world not unlike the temporary world of a science fiction convention: clever and articulate people working to understand things through rational discussion. This isn’t necessarily bad. But it doesn’t generate the tension of most stories that revolve around mysteries and political intrigue. Thus a murder that’s one of the central enigmas of the early part of the book is resolved when Dzmare asks a suspect about it directly.

This is odd because thematically the book’s concerned with the idea of empire, and how empire works ideologically, and the different ways people inside and outside an empire experience its exercise of power. In many ways the book’s perceptive about this. Teixcalaan is an empire in the fullness of its power; it suffers from factions that are pushing it toward a civil war, but its elites believe in the ideology of the empire, and in the empire’s rightness. More than a political structure, the Teicalaanli people are proud of their art, culture, and poetry, valuing it with all the self-assuredness of Empire. Notably, Earth is not mentioned in the story, and Teixcalaan has no single terrestrial precursor. That means technology’s been invented along a different timeline, according to Teixcalaan priorities.

Some things are nevertheless baffling. If Dzmare not having a consular staff feels odd, her being unaware of the situation of the Teixcalaan succession is a wrong note: a representative of a small polity on the border of a major empire must know what’s happening inside the empire for its own survival. To slightly paraphrase a Canadian Prime Minister, living beside an empire is like sharing a bed with an elephant—no matter how friendly, you’re affected by every twitch or grunt.

Still, Dzmare’s useful as an outsider. She’s studied the empire from a young age, knows the culture of the Teixcalaan and admires it, but is also conscious of not being a part of it. She’s aware of alternatives the other characters don’t perceive. But I thought she might not have been the ideal character to follow in this story. It struck me that Nineteen Adze was the more interesting character with the more dramatic arc; closer to the heart of things, she changes more during the story, arguably makes the toughest and most compelling decisions, and the climax involves her more directly than Dzmare.

There’s nothing particularly wrong with Dzmare’s perspective, fundamentally a story of a curious young person interacting with and exploring a complex science-fictional society. But I wonder whether at least alternating perspectives with Nineteen Adze would’ve allowed the book to touch on the same subjects while also broadening the scale, themes, and emotional affect. Perhaps if it ends up being adapted in another medium that’ll happen. As it is, A Memory Called Empire is a thoroughly entertaining book for a science fiction fan, but likely less compelling for others.