BOOK REVIEW: The Traveling Companion and Other Plays

A new collection of late-period Tennessee Williams plays shows the genius's more experimental side. The results are uneven but fascinating. 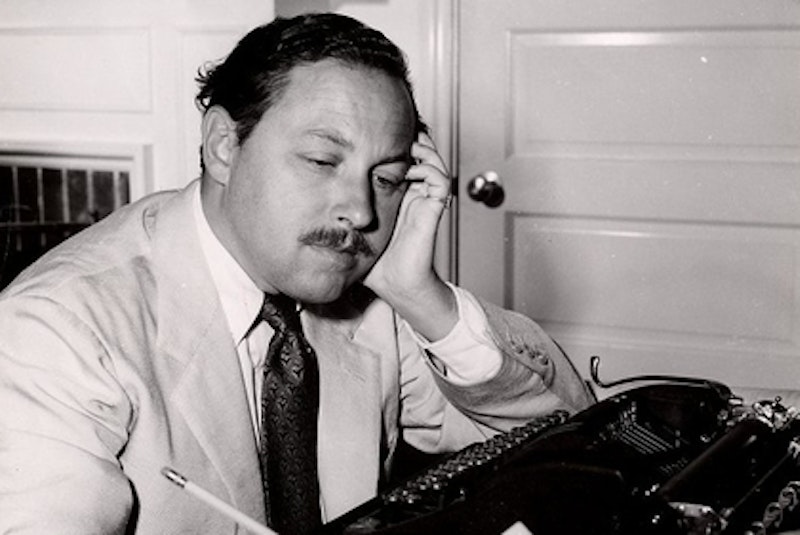 When presented with the opportunity to read a new book of mostly unpublished Tennessee Williams plays, The Traveling Companion and Other Plays (New Directions, $17.95) I geeked out to say the least. I've read everything he's ever written, and own a recording of Williams in a penny arcade in New Orleans performing his one-man parody of A Streetcar Named Desire. I had visions of the Holy Grail of modern drama, the undiscovered gems of an already mind-blowing canon, complete with all the tortured Southern Belles and self-hating closeted queers we've come to expect from the author of The Glass Menagerie, Cat on a Hot Tin Roof, Night of the Iguana and Suddenly Last Summer. But, to paraphrase another decent playwright, the course of true love never did run smooth.

This collection of one-acts and several short multi-act plays, edited by Annette J. Saddik, isn't exactly what you might expect. First, this 12-play collection is comprised entirely of his later works, from 1960 to 1982 (the year before his death). The works of a 60-year-old Pulitzer Prize-winner who's been through the jungle of fame and spit out on the other side are bound to have a different flavor than a young upstart blithely compiling the influences of a decidedly troublesome upbringing. But the later works of Williams don't simply have a different flavor; they're an entirely different food group.

Heavily influenced by Beckett, Genet, Noh, and the theater of the Absurd, Williams branched out into some seriously experimental stuff in his later years. He was also clearly dealing with the emotional struggles of aging, a deeply unsatisfying romantic life, and a waning career. Furthermore, few of these later works are set in the sweaty Garden District climate we associate with so many of his plays. He places many of his characters in Greenwich Village, his adopted home late in life. He also sends them to 18th century England, Cape Cod, and even an ash-covered desert after the End of Days. If you're looking for his trademark kitchen sink drama with a dysfunctional Southern twist, you'd better stick with the earlier classic stuff. However, if you're interested in seeing what happens when a great realist American playwright attempts to adopt the experimental aesthetics of his contemporaries (with slightly uneven results), read on. He delved deeper into the raw emotional world he builds for all his characters, and sometimes the price for that is traditional naturalism. In the words of the editor, "Williams often eschews realistic representation in order to access those truths beyond reality's surface."

A few of the works in this compilation are downright disappointing and gave me no question as to why they're so rarely produced. After reading A Chalky White Substance, a depressing, thinly veiled allegory about the relationship between a pixie of a boy and a bitter older man set in a post-apocalyptic wasteland, I was scared. Probably because this is the first piece in the book and my expectations were so outlandishly high. Luckily, it's short and probably the weakest of the bunch. What's most striking about this collection is the lack of consistency in subject, style, and the quality of writing. The second play in the book, The Day on Which a Man Dies, An Occidental Noh Play, dedicated to Williams' friend Yukio Mishima, borders on greatness. Loosely based on the life of Jackson Pollack, this play appropriates the Noh form but still retains the ironic melodrama that Williams is so deft at employing. As the aging painter and his common-law wife battle in their Tokyo hotel room for some sort of closure at the end of their relationship, an omniscient Noh narrator orchestrates the action and steps in to play small roles. The character of the painter also seems to mirror Williams' own frustration as an artist. As his feisty partner insults his recent dalliances with experimental painting, he declares that he's "working with absolute freedom for the first time," surely how Williams thought of his own later work, which received mixed to bad reviews. This struggle isn't without levity, however; the wife retorts, "So's a child's making mud-pies." That's one of my favorite things about this playwright—he'll make grand claims, take huge risks, but always with a healthy dose of self-deprecation.

Several other short works are of note. The Parade is a heart-wrenchingly accurate portrayal of unrequited love, and the apathy felt at the end of a summer vacation. Don, another character who speaks in an eerily Williams-esque voice is an older playwright in love with young chorus boy, Dick, and befriended by the sensitive Miriam, who in modern parlance can only be described as his hag. The dialogue is moving without being trite, casual with a sense a gravitas. Don has several monologues that rival any of Williams' earlier work. One in which he laments that he is "conscious of [his] whole life stretching behind [him]…the weight of every day…a tremendous vagueness" is particularly poignant.

One of the more Beckett-esque attempts is The Remarkable Rooming House of Mme Le Monde. In a scenario suspiciously similar to that of Endgame, Williams poses his protagonist, Mint, in a world of frustration, decay, and the harsh realities of self-preservation. Mint is in a sort of arrested development, as an accident has robbed him of the use of his legs and as a grown man he still sports his old public school uniform. He is forced to hang from a series of hooks in the attic of Mme Le Monde, and sees no one, save the son of his landlady who sneaks upstairs periodically to rape him. It's a messed up world, but somehow, Williams brings a sort of depraved order to it. And, unlike Beckett, who can occasionally come off as too cerebral on the page, Williams peppers this dark underworld with razor-sharp humor, a welcome relief. That's another characteristic bonus of this work, as it is with Williams' whole canon: it's as enjoyable on the page as it is onstage. His elegantly quirky vernacular runs through most of these plays and his stage directions are as beautiful as any soliloquy, i.e. "Their facial expressions are almost the same: they are like two children in school, asked the same question that neither of them can answer. And so the calcium glare dims out and…THE CURTAIN COMES DOWN." I don't know if you can act that, but it sure does paint a picture for the reader.

Several other works, including a tragic ode to Williams' sister Rose (a theme reprised from Suddenly Last Summer), a study of an aging female painter's nervous breakdown, and the Theatre of Cruelty-inspired Kirche, Kuche, Kinder are worthy of praise. It's also important to note that Williams swore to never write another Southern Belle in his later work. And he kept his word. The ladies of the late Williams body of work are fierce, independent, and for the most part stable, if a little nutty. Even in referencing the committal of his sister to a mental institution for "inappropriate" lustful impulses in A Cavalier for Milady, he writes her character out of her hellish family life, something he could not do in reality. He treats most of his men with cold brutality and supports his women up and out of their circumstances, sometimes even giving them, of all things, a happy ending.

A few other (thankfully) short works are quite inferior, confusing, and almost poorly written. In these cases, it isn't always clear where Williams' voice is. As in the bizarre The Pronoun 'I', which follows a fictitious English queen through several carnal escapades and her escape from revolutionaries, it's as if Williams got a mediocre idea, sat down, wrote for 20 minutes, and never looked at it again. Which is probably the case. It's absolutely valid to assume that we don't know some of these later works because Williams didn't want us to.

Overall, this collection is a fun, surprising read, with moments of mediocrity and moments of brilliance. For the Williams enthusiast, reading The Traveling Companion is a little like reuniting with your high school sweetheart. Sure, he's grown up, gotten a paunch, and occasionally says something embarrassing, but the history and good times shared cannot be ignored or disrespected.