A Revolt at The Nation!

The weekly's readers still love speaking truth to power, and debating about feminism and post-racial politics, but not without their crossword puzzle. 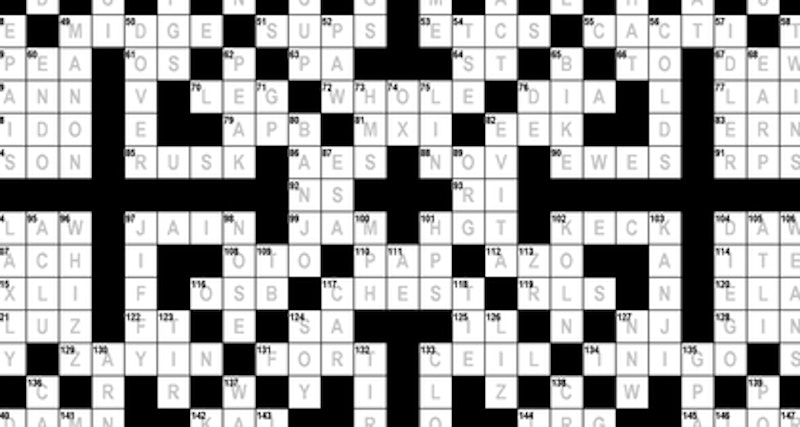 This past weekend, in a dutiful if largely fruitless effort to keep up with the schizophrenic reporting and moralizing about the ongoing Obama-Clinton nomination skirmish in what The Nation calls "the corporate media," I managed to ferret out a few gut-busters, some intentional, some not. Starting with the May 19 issue of The Nation itself, opposite the page three editorial, "Our Lapdog Media," in which an earnest writer exhorted the presidential candidates to "stop playing the media's game and start addressing the role Big Media has played in debasing rather than illuminating this historic election," there was an exquisite flurry of letters to the editor that had little to do with politics. Thirteen readers of the weekly-which contrary to the house ad it runs each week, headlined "Nobody Owns the Nation," the actual proprietors of the left-wing periodical have more in common, economically, with "Big Media" bigfoots like Joe Klein or David Broder than a laid-off Indianapolis waitress or factory worker-were unanimous in their protest that the magazine's weekly crossword puzzle is now on a fortnightly schedule.

One Nation malcontent, Frances O'Neill of Marquette, MI, wrote: "Talk about your bitter, gun-toting, religious voters-their malaise can in no way measure what I felt upon turning to the last page. What, no crypto-puzzle?... I cannot solve the global warming problem, the mortgage crisis, the superdelegate conundrum, but, by God, I can solve the weekly puzzle. Please bring back the one thing over which I feel some control!" New York's Sandy Petrey was angrier: "I have been a Nation subscriber for decades and an [magazine] Associate for years. I will be neither in the future if the cryptic crossword continues to be replaced by idiotic fluff like the interview with Nicholson Baker. Fascinating though it was to learn that his books grow like strawberry plants, I prefer the puzzle."

It makes you wonder: If this sampling of Nation readers, who, according to the magazine's demographics are well-educated and politically active, are apparently growing tired of the relentless back and forth among what's referred to as the "commentariat" over Rev. Wright, Sen. Clinton's sudden bonding with rural voters who knock back boilermakers and John McCain's (grossly taken out of context) stance that the United States will remain in Iraq for a century, how in the world will the media, corporate or not, fill its pages and Internet websites once this election is finally decided?

Given the persistent circulation and advertising decline of the big dailies-and magazines are undoubtedly next-and the layoffs and buyouts at companies like The New York Times and Tribune, could it be that some of the celebrated and wealthy op-columnists be forced to walk the plank next year? After all, it must chafe the Times newsroom (fabulously bloated by any standards, a result of the now distant days of double-figure quarterly profit margins) that a number of colleagues will soon no longer be present at the water cooler while Maureen Dowd, Frank Rich, Gail Collins, David Brooks and Thomas Friedman, for example, continue to draw annual salaries that are estimated to be in the half-million range.
And it must really burn up soon-to-be-departed copy editors and third-tier assistants that they'll be looking for new jobs so shortly after Times publisher Arthur Sulzberger Jr. added conservative nemesis Bill Kristol as a weekly columnist. Presumably, Kristol isn't filing his 800 words for prestige alone, and, given the scalding Sulzberger received upon that particular appointment, it's probably not an uncommon sentiment that his paycheck could save several lower-level jobs at the paper.

On Sunday, two columns, unintentionally, were wonderful complements to each other. First was Thomas Friedman's "Who Will Tell the People?" in The New York Times, a lecture given to politicians and citizens, supposedly the result of his "opportunity" to take the pulse of the nation in the past five months while writing a book. Friedman, demonstrating his subtle touch for empathizing with fellow citizens, complained that when he and his wife traveled from New York to Singapore (the extraordinarily wealthy Friedman at least had the grace not to admit he was flying first class), they couldn't find a seat in JFK's waiting lounge while at Singapore's "ultramodern" airport there were free Internet portals and "children's play zones." He continued: "We felt, as we have before, like we had just flown from the Flintstones to the Jetsons. If all Americans could compare Berlin's luxurious central train station today with the grimy, decrepit Penn Station in New York City, they would swear we were the ones who lost World War II."

This is because the United States is not "as powerful as we used to be." Could be, and that's a common theme in the media, but as a frequent Amtrak customer I can attest to the fact that New York's Penn Station was a shambles 30 years ago; in fact, it's in far better shape today, as is Washington's Union Station. And yes, Germany's airports and train stations are splendid, but that country's unemployment rate is higher than America's and its perennial assimilation issues with immigrants (likewise in France) doesn't exactly portend for an economically vibrant future. Friedman concludes his de facto commencement sermon by advising today's youth to follow their hearts and enlist in the cause of researching renewable energy, repairing the country's infrastructure and to fix education. Maybe the multimillionaire Friedman is correct in saying that "millions of Americans are dying to be enlisted in those efforts," but in any case it's easy for him to say.

In The Los Angeles Times, also on May 4, humorist P.J. O'Rourke-onetime hippie activist turned capitalist activist-imparted his own Boomer advice to graduates, telling them, among other ideas, to "Go out and make a bunch of money." Money can't buy happiness, O'Rourke repeated the old saw, "but money can rent it."

He also advises young adults not to get stuck on idealism: "Don't chain yourself to a redwood tree. Instead, be a corporate lawyer and make $500,000 a year. No matter how much you cheat the IRS, you'll still end up paying $100,000 in property, sales and excise taxes. That's $100,000 to schools, sewers, roads, firefighters and police. You'll be doing good for society. Does chaining yourself to a redwood tree do society $100,000 worth of good? Idealists are also bullies. The idealist says, 'I care more about the redwood trees than you do. I care so much I can't eat. I can't sleep. It broke up my marriage. And because I care more than you do, I'm a better person. And because I'm the better person, I have the right to boss you around.' Get a pair of bolt cutters and liberate that tree."

I wonder if the cats at MoveOn.org cracked a smile at O'Rourke's piece; the betting here says yes, even as they prepared another smear campaign against the villain of the moment.

Finally, and mercifully eschewing politics and Nation screeds against Rupert Murdoch--who's actually investing in newspapers--Times sportswriter Tyler Kepner captured a funny comment from Yanks pitcher Phil Hughes, currently on the disabled list after a disastrous start to the season. Last week, Hughes had trouble seeing signs from his catcher and a doctor told the 21-year-old that he was nearsighted. When he returns to the mound, Hughes will wear goggles, and said, "I'll look like I went to college."

I don't think that was a dig at teammate Mike Mussina, who's habitually identified as a brainy graduate of Stanford University. Mussina's an odd bird, demonstrated by his public testiness after the Yankees opened a season a few years ago in Japan. He was unhappy about the travel, and reportedly didn't leave his hotel room, didn't sample the local cuisine, and had no interest in exploring Tokyo. Maybe a sense of adventure isn't stressed at Stanford.