Beauty on the California Coast

You can hike a private trail to a secluded beach where seals and otters surf the breakers. 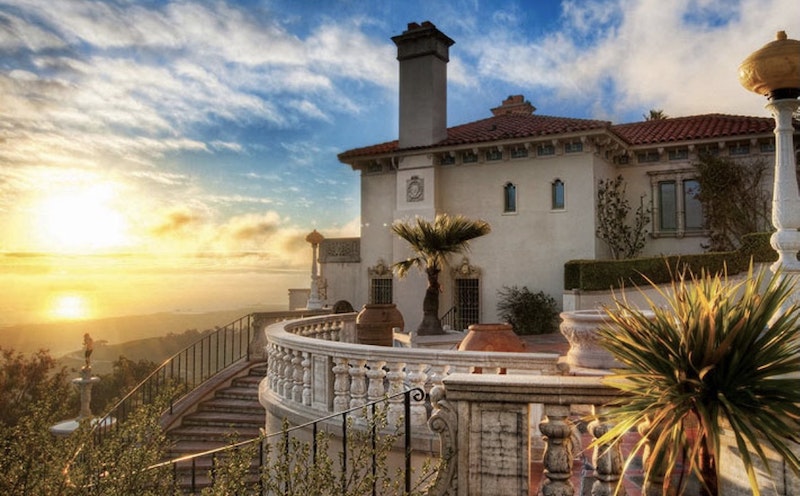 Big Sur is my favorite spot in the world. Before Covid, my wife and I drove to Big Sur every few years. We hiked through old-growth forests of giant redwood and live oak. We traversed fallen logs over flowing creeks and sat atop sheer cliffs watching the late-afternoon sun disappear into the ocean.

From Los Angeles, the drive to Big Sur takes six–seven hours. After driving through San Luis Obispo, you merge onto Highway 1 along the Pacific Ocean. The coastal views are breathtaking with fog cascading over white-capped waves. Big Sur formally begins in San Simeon where Hearst Castle sits atop the Santa Lucia Mountains. Keep driving north and you come upon a beach packed with blubbery elephant seals. The creatures move awkwardly on land but in the sea they become nautical ballerinas. You can get within 100 feet of them. If you get too close they warn you off with a trumpet-like bark.

Back on the road, you drive past the Piedras Blancas lighthouse and come upon large fields of blue lupine, Indian paintbrush and bright yellow monkeyflower. Soon you arrive at Ragged Point, a rustic inn that was once part of the Hearst Ranch. The ocean-view rooms are poised 400-feet above sea level. You can hike a private trail to a secluded beach where seals and otters surf the breakers. At night, Highway 1 is blanketed in fog causing car headlights to resemble low-flying planes cutting through the clouds.

Continuing north, the road becomes steep and circuitous. This is where the spirit of Big Sur enters your veins. The curvy mountain highway forces you to slow down and focus. It’s common to come upon a trailer driving 10 mph. With few passing lanes, you’re compelled to embrace the wisdom of the turtle and enjoy the majestic views. We put Miles Davis or Coltrane on the stereo, open the windows and let the salty ocean breeze blow through our hair. Before long, the first coulter pine trees come into view. The pinecones are massive and spiky and lay all over the roadside. Hawks soar overhead while vivid pink and orange wildflowers dot the mountains. This is why we drove 250 miles from Los Angeles. We’re no longer in a hurry to get anywhere.

We pass through the tiny town of Gorda (population 1300). This is the last opportunity to get gas for 40 miles. Along with a filling station, the town has a restaurant, a motel, a convenience store and an espresso bar. In the late-1800s, a stagecoach stop was built in Gorda for people flocking to the gold rush. In 2017, the largest landslide in Big Sur history buried Highway 1 just south of town. The road was closed for more than a year, stranding residents and damaging the tourist trade. It took more than a year to reopen Highway 1. The highway has been closed 55 times due to landslides.

Ten minutes north of Gorda is a rocky shoreline called Jade Cove. A small sign on Highway 1 indicates the spot. You park by the roadside and walk a half-mile across a field bursting with wild orchid and coastal sage. A thin trailhead descends to the shore below. The trail’s precarious and home to ticks, rattlesnakes and poison oak.

Jade Cove attracts gem hunters for miles around. A sign reads: “Prospecting, mining or removal of any rock, mineral or material is prohibited above the mean tide level.” You can venture into the water at low tide and search for greenish jade rocks that wash up in the waves. Fake jade (serpentine) is everywhere so it’s easy to get fooled. Serpentine scratches easily while jade is difficult to scratch even with a sharp knife.

Searching for jade at hide tide is dangerous. We met a local hiker who told us about a fisherman swept out to sea. He urged us to be careful saying, “Every grain of sand was once a mountain, every speck of dust was once a man.” Before the pandemic, an elderly silversmith named Brother John owned a jewelry stand at Ragged Point. He encouraged rock hunters to bring gem finds that he made into jewelry. He was a Big Sur legend who lived in a van on Highway 1 and regaled customers with tales of UFO sightings and military conspiracies while displaying a hunk of vulcanized jade with yellow stripes he’d found at Jade Cove. When Brother John died in 2011, his memorial service attracted mourners from all over the community.

Continue north and you come across cattle foraging on the steep hills either side of Highway 1. These are the luckiest cows in the world with immense fields of untouched grass, mild temperatures and glorious ocean views. Locals say if cows are standing this means good weather. If they’re sitting this means rain is coming. Hitchhikers still roam Big Sur as do grizzled wanderers looking like they’ve lived off the grid for decades. A few sporadic houses appear. One is the Limey House, the setting for Steven Soderbergh’s 1999 film The Limey. My wife and I speculate on how people exist this far from civilization. Where do they shop for groceries? What happens if they need a doctor or dentist? How do they get their mail?

As we enter Pfeiffer State Park, campsites are plentiful. Most go for $35 a night. There’s no WiFi and camp fires aren’t permitted. We stroll among redwoods and giant sequoias that are hundreds of years old. We hike to the roaring Big Sur River and search for kingfisher and woodpeckers. Signs of animals are everywhere. We see territorial scratches on trees from black bears or mountain lions. There are slithery snake trails, myriad piles of scat and a pervasive odor of skunk.

There’s a sacred feel to the forest as it must have felt to the indigenous Esselen Tribe who lived here thousands of years ago. The Spanish dubbed the area el país grande del sur(big country of the south). In 1542, Spanish explorer Juan Cabrillo wrote of Big Sur: “There are mountains which reach to the heavens, and the sea beats on them… It appears as though they would fall on the ships.” In 1770, Spain established a mission in Monterey. Father Junipero Serra attempted to enslave and convert indigenous people to Catholicism. By the early-1800s, nearly all the local tribes were killed by disease.

After the Mexican-American War (1846–48), Mexico ceded California to the US. Homesteaders arrived and built tiny cabins in the forest. Their existence was hardscrabble and dangerous. They harvested trees and lumber was sent north to build San Francisco. Artists were attracted by the beauty of Big Sur. In 1912, watercolorist Francis McComas described the area as the “greatest meeting of land and water in the world.” Poet Robinson Jeffers called Big Sur “the noblest thing I’ve ever seen.” The German artist Helmuth Deetjen built a compound in Big Sur with cottages made of redwood. Deetjen’s Big Sur Inn remains an institution.

In 1937, California Gov. Frank Merriam lit a dynamite fuse blasting a huge boulder into the ocean. Moments later, he officially opened the new highway to traffic. The road was initially called the Carmel-San Simeon Highway before it was renamed Highway 1 two years later. The new road made the coast accessible by car.

In 1944, Henry Miller returned from Europe and moved to Big Sur. He settled in a house on a hill above a Canyon and wrote Big Sur and the Oranges of Hieronymus Bosch. The book was an account of the peaceful Big Sur lifestyle. He wrote, “Out yonder they may curse, revile and torture one another, make a shambles of creation, but here it is unthinkable, there is abiding peace, the peace of God and the serene security created by a handful of good neighbors living at one with the creature world.”

In 1960, poet Lawrence Ferlinghetti purchased a cabin on Bixby Creek. He loaned the shack to Jack Kerouac. whose 1962 novel Big Sur depicts his mental and physical decline as he battles advanced alcoholism. Big Sur offered Kerouac a temporary respite allowing him to take in the beauty of the forest. “On soft Spring nights I’ll stand under the stars—something good will come out of all things yet—And it will be golden and eternal just like that—no need to say another word.”

Richard Brautigan wrote A Confederate General from Big Sur in 1961. He recounted Big Sur as “that thousand year old flophouse for mountain lions… that million year old skid row for abalone… Come to Big Sur and let your soul have some room to get outside its marrow.” Hippies followed Kerouac and Brautigan’s advice and flocked to Big Sur in the 1960s. They lived in cars or under bridges. Some descended steep cliffs to camp on the beach. The area became a hotbed for LSD experimentation. Counterculture pioneer Michael Murphy, whose family owned 27 acres along the coast, co-founded the Esalen Institute in 1962. Esalen became an international retreat focusing on alternative living and the human potential movement. This is where the New Age movement began. Early visitors included John Steinbeck, Aldous Huxley, Ansel Adams, Buckminster Fuller and Timothy Leary.

Another Big Sur institution is Nepenthe, a restaurant and bar named after the potion in Homer’s Odyssey allowing you to forget all your pain and sorrow. Nepenthe opened in 1949 on land once owned by Orson Welles and his wife Rita Hayworth. Architect Rowan Maiden, a student of Frank Lloyd Wright, designed the structure. It was built with redwood and adobe bricks and sits 800 feet above sea level. A local sculptor named Edmund Kara carved a rising Phoenix bird from a dead coastal oak tree on the outdoor terrace.

In 1981, Big Sur painter Emil White donated his Redwood house on Highway 1 to create the Henry Miller Memorial Library. The spot is a repository of Miller’s manuscripts plus a bookstore and café. The library doubles as a performance space attracting musicians like Patti Smith, Laurie Anderson and Arcade Fire. Just down the road is the Big Sur River Inn and Restaurant. Built in 1888, the spot has a gas station, post office and gift shop. You can get a beer and barbecue, sit on a bench in the creek and let your feet dangle in the water. You can also meet some of the 1728 residents who live in the area year-round. Some are relatives of the original families who settled the area.

In 2017, heavy rain and mudslides damaged Highway 1 to the north and south of Big Sur. The area became an island, cut off from the outside world. Volunteers delivered food and supplies by hand on a footpath through a grove of Redwoods. A few locals left town for good while others embraced the forced solitude. Jeanne Crowley, who managed Deetjen’s Big Sur Inn said, “They always say if Big Sur wants you, it will keep you. If it doesn’t, it will spit you out.”

To live in Big Sur is to accept the risk of mudslides and forest fires. The biggest danger to the area is over-tourism. More than a million cars pass through each year. During summer months, gridlock on Highway 1 is incessant. With resorts like the Post Ranch and Ventana charging up to $2000 per night, developers salivate when eyeing the area’s tourist potential. If not for the fires and landslides, Big Sur would already be like the French Riviera. The spirit of Big Sur remains intact. The local credo for visitors is “Leave no trace.”