It’s fair to say this book is about power and unchained ambition. 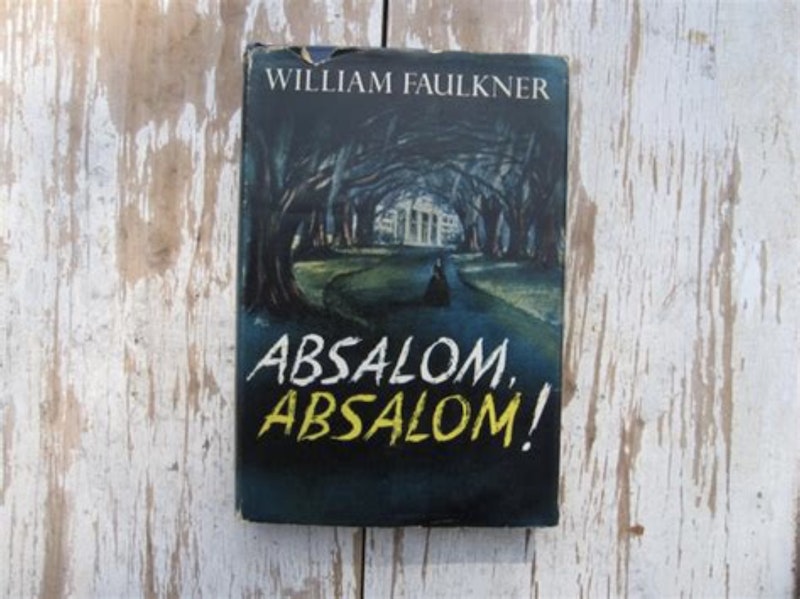 Years ago, I was packing a milk crate of books to take up to Islesboro, Maine for the summer. I was selecting American writers I hadn’t read before: Hemingway, Steinbeck, Melville and so forth. A friend looked the crate over and asked why there was no William Faulkner. I hardly knew the name. She said he writes about the South, was a great writer, won a Nobel Prize, and it’d be rewarding for me to read some of his stuff. Over the next several years, I read all his books. The one under consideration here is, in my opinion, the best fiction book ever to emerge from America.

Absalom, Absalom! (1936). It’s fair to say this book is about power and unchained ambition. Or, as Quentin Compson imagines early in the novel, it’s about “…why God let us lose the War.” (Some readers will remember Quentin from The Sound and The Fury.) It’s the story of Thomas Sutpen and the South of his times: slavery, chivalry, miscegenation, race, and why we can never know the full history of the past, even though Faulkner has said: “The past isn’t dead; it isn’t even past.” It’s a difficult read, possibly the last “gothic” or epic novel written in America. The language and syntax are more reminiscent of Joyce, and almost a repudiation of Hemingway’s “cut and dried” writing, which l also like.

I’ve read Absalom several times, and each time, I discover new things in the language, images and characters. After my first reading, I found a Chronology and a Genealogy at the end of the book. They’re useful for sorting out the timeline, and I wish I’d read them first. Faulkner has a convoluted and beautiful method of using language, and you have to work to get the rewards.

There’s no real plot in the traditional sense. The book follows the rise and fall of Sutpen, whose main characteristics seem to be racism, hubris, ambition and masculinity. He’s a poor white guy from Virginia; he goes to Haiti and manages to put down a slave rebellion on a sugar plantation. His reward allows him to purchase a huge chunk of land in Jefferson, Mississippi. Thomas Sutpen’s plans require a plantation (known as Sutpen’s Hundred), slaves, a wife, and a mansion. Most importantly, it requires a son to inherit it and keep the name and legacy alive. He has one son already, from an earlier marriage (1831) to a woman in Haiti. When he discovers that the son, Charles, is partially black, he repudiates wife and son. His dynasty can have no black blood.

Once established in Jefferson, he fathers another son, Henry, by Ellen Coldfield, but that ends poorly for reasons having to do with race. He also fathers a daughter, Judith, and that doesn’t go well either. Ellen dies, and Sutpen is left without an heir. He crudely proposes to Ellen's sister, Rosa. That goes nowhere because Sutpen wants her to produce a male first, and Rosa balks.

The book opens with a conversation (1910) between the elderly Rosa and Compson, whose grandfather served in the Confederacy with Sutpen. Their dialogue sets the stage for an epic moral tragedy. The story’s told mostly in flashbacks, by different pairs of narrators having conversations. Since memory is fallible, their stories differ in certain details. Faulkner’s suggesting that the actual truth is hard to come by. Still, he paints a pretty strong picture of the social mores of the South and why they were doomed to lose the War.

The title comes from a Bible story in which a son (Absalom) of David, king of Israel, rises up against his father. David’s told his men to capture his son alive, but he’s slain in battle. David cries out: “O my son Absalom! My son, my son Absalom! If only I had died instead of you!”

Today, the book could easily be “cancelled” because of Faulkner’s accurate portrayal of the language and actions of the actors, all of whom are accurately and fully developed. The “N” word appears frequently; a white isn’t allowed to marry an octoroon; slaves are pitted one against another in fistfights. There are some very long sentences in italics, one over 1200 words. The italics set certain actions and memories apart from any sense of linear narrative. We end up with a very convoluted story about a certain man, the Civil War, the meaning of family, and the collapse of a South unable to survive its fundamental flaw: slavery. But Faulkner doesn’t pontificate; the various narrators express wide-ranging feelings about the difference between blacks and whites.

The final conversation takes place at Harvard (also in 1910), where Quentin’s dorm mate Shreve, a Canadian, simply asks, “What’s the South like?” Which could easily have been the opening sentence. A long sequence follows where both boys try to sort out the meaning of the whole tale. But Quentin can’t answer: the past is too convoluted, too elusive, peoples’ memories are not only fallible, but prejudiced by their own experience of the South.