Battered Off the Diamond

I’d take a baseball bat to this guy’s face. 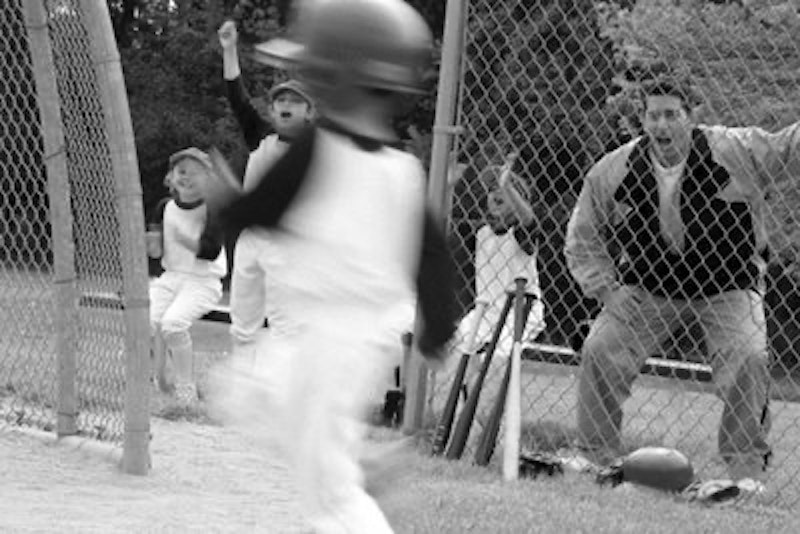 For five years I’ve kept score at my son’s baseball games and a few years ago, I had the misfortune of witnessing something really awful. There was a kid on the team—we’ll call him Andy. He was a very quiet kid; never spoke to another player or the coach. His dad was a short, angry-looking man; his face wrinkled into a permanent sunburned scowl. He carried himself with the overconfidence of someone who believes he’s important and probably isn’t.

Andy’s dad was constantly at his side, and not in an encouraging way. He barked instructions and directions at him from start to finish. “Keep your elbow up!” “Get your glove on the ground!” and other typical overzealous baseball parent commands, but with a jolting, harsh tone that would make other parents on the sideline wince.

When Andy came in from the field, his dad would snatch him at the elbow, yanking his arm hard and pulling him aside for batting or catching practice, and hiss more criticism into his ear. Andy was seven years old. The only words I ever heard him say were “Yes, sir” to his father when a response (“Do you hear me?”) was demanded.

In the dugout, I keep the boys lined up on the bench in the batting order, otherwise no kid would ever know who was up next. Andy was always intercepted before he got to the bench, not permitted to sit with the other boys. One day I approached the father and told him we needed all the boys in the dugout sitting with their team. He glared at me with such hatred, narrowing his beady eyes even further than normal. I never spoke to him again. Andy never sat with his team.

A few games into the season, I spoke to the coach, stating concern about how Andy was treated by his father. The coach agreed, saying he didn’t like the way the father physically yanked the boy around. We agreed to keep an eye on the situation.

One Tuesday, Andy didn’t show up for the game. The coach said he hadn’t heard from the parents. We’d never seen the mother. The following Thursday, Andy showed up with a huge black and blue eye, practically swollen all the way shut. I looked into his face and asked him what happened, and his father looked at me and answered he’d been playing baseball with neighbor kids and accidentally gotten hit with a bat. “You know how kids are,” he said with a fake laugh. I glared at him. Andy looked at the ground with his one good eye.

After the game, I called the coach on the phone. “You know that asshole father did that,” I said. He agreed, saying the father had oddly sent him a photograph of the boy the night before, explaining away the injury. The coach had thought it very strange the father would do that, and having seen the boy, reached the conclusion he’d been slugged.

I encouraged him to report it. The league, like any other organization, requires us as the children’s supervisors to report suspected abuse. The coach struggled with the decision to make the call to child protective services, nervous about making the accusation and being wrong. I assured him he wasn’t wrong. He made the call the next morning, calling me to confirm it was done.

Andy returned to finish the season. His mother brought him and sat in a chair quietly off to herself; the father never returned. But the next season, I saw Andy and his dad again—Andy was playing on the opposite team, and his dad stood once again directly behind the catcher at the backstop where he always had, clenching the chain link fence with his red, angry hands.