It doesn’t bother me at all that Trump gets his sexual politics from Frank Sinatra. 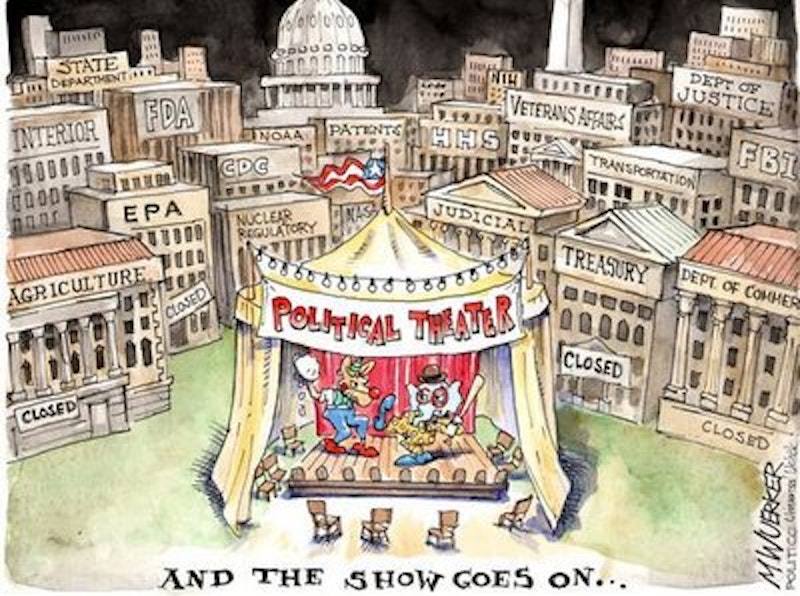 It no longer matters who wins this election: the Deep State stands exposed, and American politics can never be the same. The Wikileaks revelations have torn the mask off of our sham democracy and revealed it as nothing more than a cheap carnival trick, a media spectacle staged by the ruling elite to give the masses the impression that they have some measure of influence over how they’re governed. We may now safely retire the phrase “conspiracy theorist,” promulgated by the CIA and the FBI over 50 years ago to discredit investigative journalists and anyone else paying attention to what was really going on. Indeed, it seems that American government consists entirely of wheels within wheels of various conspiracies, sometimes working in concert, more often contending for leverage and control. Nothing happens by accident.

The total corruption of our mainstream media outlets has never been more obvious. Corporate print and broadcast outlets have lined up as one in support of the Wall Street candidate, doing their best to ignore and bury credible reports of vote-rigging and open election theft, of hired thugs on the campaign payroll dispatched to disrupt opposition rallies. They go 24/7 with sketchy reports of classic Rat Pack-style sexist humor from Donald Trump, and ignore the well-documented off-the-scale sexual depravity of the Clintons. Pier Paolo Pasolini’s Salo is a pretty good glimpse into the private lives of the ruling elite. It was good enough that they had him murdered for it. An American remake can’t be too far off, given how totally out of ideas Hollywood is these days. Starring Matthew McConaughey as Jeffrey Epstein and Harry Dean Stanton as Bill Clinton, maybe Corey Feldman as Vince Foster. I’ll bet Roseanne Barr would just love to play Hillary.

The most horrifying thing about this election is that we’re going to have to listen to one of these two gasbags for at least four years, barring an aneurysm or some other miracle. It doesn’t bother me at all that Trump gets his sexual politics from Frank Sinatra. I’m far more troubled by the fact that Hillary Clinton apparently gets hers from Elizabeth Bathory. It’s too easy to imagine her bathing in the blood of tortured virgins. Trump is a character out of a Billy Wilder movie. The Clintons are a couple out of an early John Waters film. It’s basically Professor Harold Hill versus Norma Desmond for the privilege of presiding over the total collapse of the American Empire.

If Trump wins, we might avoid a nuclear confrontation with Russia and finally rid ourselves of George Soros. He might reinstate Glass-Steagal. If Clinton wins, I suspect that there’ll be a movement to repeal the 19th Amendment as soon as we emerge from the bomb shelters. It doesn’t matter. The Deep State has been exposed. The mainstream media is merely the public relations wing of the military-industrial complex. It’s all lies and theater, bad theater.

I’m stockpiling guns and ammo, cigarettes, toilet paper, and vodka. Lots of sardines and beans of every shape, size, and description. Quart jars of cannabis oil. I’m sharpening my knives. The wheels are coming off this country. Refugee clowns haunt the strip malls and back roads of the suburbs, silent and terrifying, distant echoes of calliopes and the smell of horseshit. The circus is gone and it isn’t coming back: they’re stranded here with us now, and the ending won’t be pretty.