The Trans People Are Coming, Lock Up Your Children

Why The Atlantic loves Jesse Singal. 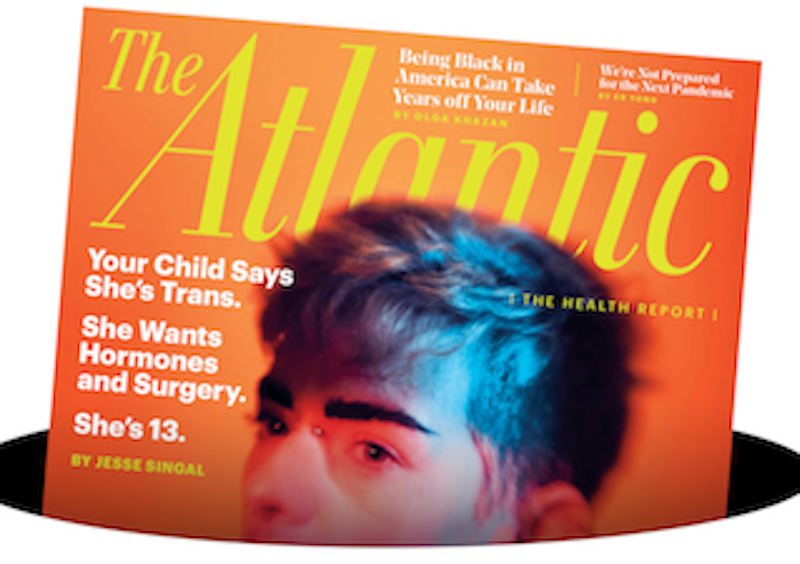 There's one genre that Singal misses. It's the genre that Singal himself writes. That's the detransition genre—stories about kids who thought they were trans at first, but then realized, with more or less trauma, that they weren’t. It's the story of how trans acceptance has gone too far, how trans activists are not victims but aggressors, and how courageous cis writers like Singal need to put the brakes on for the good of cis children everywhere.

Many have already explained why the detransition narrative is misleading—trans activist and biologist Julia Serano provides a good summary with links on Twitter. Others have pointed out that Singal implies in his headline that many trans children are getting irreversible surgery from irresponsible trans-friendly doctors, even though 13- and 14-year-olds virtually never receive surgical trans interventions.

Singal also argues that young people want to be trans because of "social contagion"—that is, trans is so cool that kids become trans out of peer pressure, the way they might start smoking cigarettes. This is ludicrous; trans people are a tiny despised minority, and there's enormous social pressure not to transition. In fact, there's so much social pressure that many trans people who initially transition end up detransitioning, sometimes for years, because the stigma and abuse they face is so overwhelming. Singal scrupulously avoids discussing this aspect of detransitioning. This despite the fact that one of the people he interviews specifically told The Economist that she detransitioned because she was terrified that people would discover she was transgender.

Trans people have pointed out the problems with the desistance genre for years. Yet their critiques are ignored. Singal presents himself as bucking conventional wisdom, but the fact is that mainstream publications love the desistance narrative he's peddling. Singal has written numerous version of this same story for New York. Katie Herzog wrote a similar piece for The Stranger. And now The Atlantic has chosen to devote a cover story to the same article, validating the genre, and ensuring that it will be the first serious narrative that many cis people read about trans issues.

Singal warns that the number of trans people is growing, but there are still only about 1.4 million trans adults in the US, or about .5 percent of the total population. That tiny minority is broadly disliked, if not despised. A majority of Americans don't believe that someone can be a different gender than the one assigned them at birth, according to Pew. A survey in the UK found that at least a third of British transgender people experienced a hate crime in 2017, strongly suggesting that virtually all trans people would be victims of hate crimes at some point in their lives.

Publishing a cover story on a small, distrusted community isn't likely to spur many clicks. A mainstream audience that’s indifferent and mistrustful of the trans community isn't going to make a trans positive story go viral in the way an Atlantic cover story is supposed to.

But the detransition angle is different. That's because it isn't about trans people. It's about cis people. Singal's article is framed as a parenting article. Detransition stories fit neatly into the mainstream genre of moral panic, in which parents are told that something—television, video games, iPhones, hook-up culture—is weakening, confusing, sexualizing, or ruining their children.

Trans people, in the detransition genre, aren't protagonists. Rather they're a threat to children. Sometimes they're a well-meaning threat; sometimes they're more aggressive and irrational. But either way, they’re a social contagion, spreading gender confusion with YouTube videos and advocacy. In the past, kids might be corrupted by rock ‘n’ roll. Now they're corrupted by trans people. It's an old story, but a solid one. Moral panics sell.

Singal and other detransition genre writers insist they aren't just trolling for clicks; they really care about the children. But for someone who cares about the children, it's remarkable how little Singal listens to what they tell him. For example, one of the kids Singal interviews, Delta, is supposed to be an example of a girl who thought she might be a trans boy, but then got treatment for depression and changed her mind.

But the final quote from Delta doesn't say she's cis. Instead, "I got better and I didn’t want anything to do with gender labels—I was fine with just being me and not being a specific thing.” That sounds like someone who considers herself a nonbinary trans person, or has put the question of her gender identity on hold for the moment.

Singal could’ve followed up on Delta's comment, and considered the fact that many people who detransition later transition again, or the possibility that some who detransition aren't exactly returning to a strict cis identity. Singal says at the end of the article that the interests of detransitioners and trans people shouldn't be at odds. But by centering the story around the concerns of cis parents, and failing to listen to his own interviewees, he ensures that his work will be used to demonize trans people, and to deny trans children care.

The detransition genre uses trans people as a convenient bugaboo to frighten the real audience of nervous, more or less transphobic cis people. Frightened cis people buy magazines; they click links. And as long as they do, Jesse Singal's career will be secure.