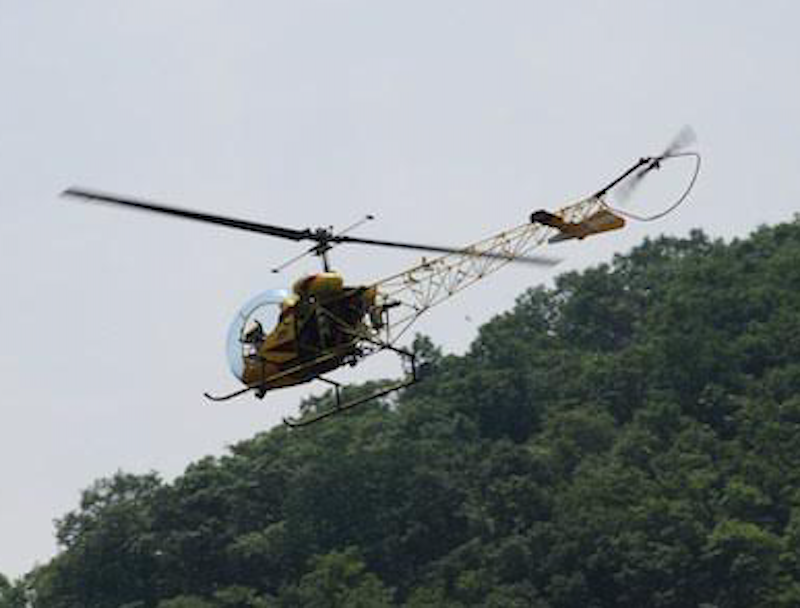 In a Bell 47G, two copter patrol boys, Chuck and Pete, swooped down for a look-see.

"What do you think? We could land there, and hoof it over, snoop around?"

"Nah. I'm bushed. And starved! We've been at this all day. Call it quits. What say we tell 'em we inspected the old shack, saw nothing? That guy was a bastard, everyone knew it. Whoever killed him, I hope they get away with it. C'mon! Back to base! Man, I want to dig into a nice juicy steak, yay thick, with all the trimmings! And a slice of cherry pie with my coffee!"

As the copter banked away, the hills reclaimed their sempiternal air. The stillness was broken only by Trixie slowly exhaling through clenched teeth. After she collected herself, she slunk back to the cabin, slept deeply for several hours. Before dawn, she packed her gear, got into her car and stole away along lonely back roads through the southern California darkness. In a hamlet, she found a VW with keys in the ignition and drove away with it. As fortune would play, there was a sweatshirt on the back seat, good cover for her bloodstained shirt. She drove to Los Angeles sporting a UCLA sweatshirt. It was rush hour when she arrived.

Spotting a Salvation Army, she abandoned the car and went into the gloomy thrift store, exploring its racks of castoff clothes, the atmosphere permeated with a scent of age. After paying for a couple of dresses, a cashmere cardigan, and a pair of penny loafers, she asked, "Is it okay if I change in a back room?" She added, fibbing with a smile, "I have a job interview this afternoon, and want to look my best. I've been down and out..."

"Sure thing, lady! Back of the store, to the left, you'll find a private room. An' good luck gettin' that job! Been in them shoes m'self." His voice was coated in nicotine, the hand holding his Pall Mall trembled. His hair was snowy white, his red nose was pocked and bulbous and featured a network of blue capillaries that exposed an eon on skid row. He smiled at her as she walked to the back, past aisles and aisles of secondhand clothes. He wished her well. And he thought back to his wino days, and just how sweet that first slug of Irish Rose tasted, kicking off the day, mid-afternoon. How right it felt, that gentle burn going down his gullet, hitting his greedy growling stomach, immediately firing his blood, his brain. Then all was lollipops and roses, laughter and good tales to tell. "No, mustn't even think such thoughts!" He took a long drag of his cig, turning a good half-inch of it into instant ash.

Signing in as Jane Jefferson, Trixie booked a room at a sleepy hotel, The Evermore. It wasn't fancy by any stretch, but certainly not seedy. Perfectly respectable—downright upright, as a bargain wine's TV commercial termed it. She had cash, enough that she could settle here, recoup, plot her next move. "I need a wig, a blonde wig. And sunglasses. It may be hokey, but they'd provide camouflage of some sort. And these crowds, I can be a needle in a haystack in Los Angeles." Her room was a pastel yellow, cheerful. Opening a window, raising it high, she rested her palms on the sill. Leaning on them, Trixie lifted herself up a bit, inhaled April, took in the view, a lonely side street. For the first time since the murder, she began to really relax and was hit with a tidal wave of fatigue. Crawling into bed, she pulled the covers over her head and slept until dawn.

Via a book wholesaler, Dash added Penguin Classics to his wares. He commissioned Bill to design a shelf to showcase the books. True, they weren't used books, but as classics they were cousins, if not siblings, of the rest of his shop. In Dash's mind he had to square that in order to feel a sense of order. Regardless, with a line of curated new books to proffer, he felt a sort of imprimatur. A far cry from Brentano's, but not shabby. Gears turned as he speculated opening a satellite shop. Could he take on the big boys in the university district? From a mustard seed...

Things were going well for Dash, so much so he realized that it had been a while since he exclaimed, "For crying out loud!" What a difference being in love makes.

The bookcase was pine and painted with a smooth glossy translucent white that reminded Dash of Gene Vincent's Stratocaster. The books practically glittered in it like gems in a proper setting. Dash wouldn't make a fortune with these Penguins, but they added a glow to his enterprise. And he calculated that they would prove a magnet for students, young moderns, pensioners, and others with both an erudite bent and an appreciation for economy. The bookstore was an extension of Dash, his little realm, his fiefdom, if you will. His customers would be his subjects, and he’d be the benevolent lord of this kingdom. He’d listen to their requests, weigh them, and unless they were of a subversive nature, most probably comply. Dash believed that if he carried the so-called counter-culture, he'd attract the ilk who think it's smart to "boost" a book. "Not on my watch!"

Professionals were beginning to populate the neighborhood; a chic French restaurant opened across the street, foot traffic was on the rise. It wasn't the university district, but it was on the upswing. And June, the wedding, was on the horizon. As Dash continued to marvel at the new bookcase, Novak trotted over and said, "Raa!"

"Ah! May I refresh your bowl, good sir?"

The next morning, Trixie showered, dressed, went to the hotel coffee shop, sat at the counter, ordered a plate of pancakes, sausage, juice, coffee, happily accepting a second cup on the house as she finished. Then she sallied forth into the big city, her first real chance to explore Los Angeles. She tossed the old clothes into a trash can. Along the way, she found a wig shop and purchased a blonde wig. At a Woolworth's, a pair of sunglasses, Jackie O style. She felt as if she was in a movie; there was a bounce to her step.

Wandering aimlessly, she stumbled upon MacArthur Park. "Oh, wow!" She remembered it from that song that was such a big hit when she was in junior college. She liked that song. It was so pleasant, and of its time—without going overboard. It was "hip" without being "hippie." Up to date! It was a good song to re-type a paper to.

Trixie found a bench near the lake and was gazing absentmindedly when she noticed a cluster of young people, some college age, some a little older, in saffron robes, shaved heads, banging tambourines, chanting. A dozen were dancing and waving their hands in the air, others were reclining on the grass. "What on earth! Well, they certainly seem happy!" Curious, she strolled over.