Antagonism of the Aardvark 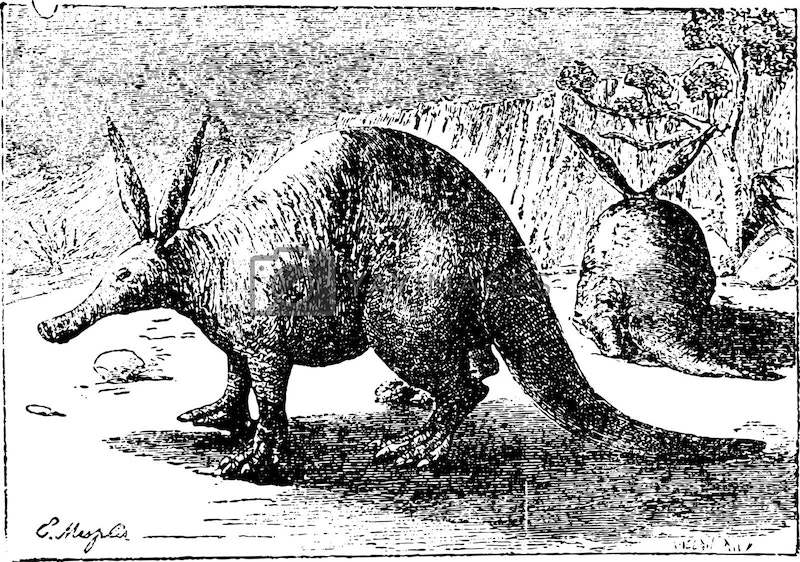 Illustration by the author's wife, definitely not by whoever vandalized it with their signature on the lower lefthand corner.

A new mask ordinance has been passed in our province (New England), and as of today at five p.m., all living beings are required to wear a face covering while outside of the home. This doesn’t bother me. What bothers me is the lack of a mask handout location. Where do I get one? I don’t have a credit card. My credit score has been terrible since I burned three credit cards during the production of Chicken Run (my co-producer and “avian adviser” credits were removed from the final cut, and the filmmakers decided to stick the knife in further by removing the most radical aspects of my contribution, such as the ending where the chickens enslave humanity and use their natural energy as batteries for a large form artificial intelligence. At the time, I was told that I was “ripping of The Matrix,” which doesn’t make any sense because I can’t even read Japanese).

Monica likes to say she can sew but I have my doubts. There in the breakfast nook she’s darning socks and talking about “cottagecore” while I look up how to turn on the stove. I can’t remember the last time I ate a full meal. There’s a low hanging malaise defining this summer, a time of stasis and despair with weather that alternates between beautiful and satanic. Luckily our barn has central air; otherwise I’d be on a spit. For much of the pre-air conditioning world, Monica and I tried to stick to cool climates, but unfortunately, we didn’t have maps or weather apps back then, so for all we knew, Saxony was in the Caribbean. You make mistakes when you’re young.

I was out one morning this week collecting berries for my cornucopia at home (I don’t eat fruit, it’s considered rude amongst birds to eat the food that our food, bugs, love so much). I like to flash freeze them and then throw them in a kiln so I can put them on a shelf in my living room and watch as my cousin Bennington comes in drunk and bumps up into the wall and destroys 50+ years of work. It’s happened at least a dozen times before. “Why do you have all of this taxidermy fruit?” He screamed at me one day to “take all of this berry bullshit back to the earth,” and then he clothes-lined my desk. Or wing-lined. Either way, my office was destroyed. I won’t go into what I did to him afterwards (Bennington was officially listed as a “Missing Poultry” for the next three years).

Recalling this memory, I decided to scrap my plan for berries and instead enlist my wife to start a mask company for birds. I told her we didn’t have to incorporate, we could keep our assets separate, but she had none of it: “A mask company? In this economy? Look, Rooster: we need to think about ourselves. Our future. What is this barn worth? Have we lost money on it? I’m not even sure if the roof stopped leaking. How much do we even have in assets?” I told her we had the barn, and… my writing career. “So nothing?” Ice cold. I replied that maybe she shouldn’t have refused the job offer at the Pentagon. She reminded me that she didn’t refuse it, she was removed from consideration after some of my writing was discovered by the government. I’m not sorry my wife married an artist, but maybe she is.

That’s too bleak… we’re doing fine. I just wish there was a place everywhere to get a free mask. Whenever I look at Human Twitter (Bird Twitter, also known as the sky, is much better), I see another article about how the coronavirus could be stopped relatively quickly if everyone just stayed home, washed their hands, and wore a mask at all times around others. I’m all for it, let’s do it, let’s kick this virus’ ass. Where is the tumult? Where are the protests at Pfizer headquarters? So many people want to “defund,” even “abolish” the police… what about private drug companies? Pfizer and Astra-Zeneca were both given a billion and a half dollars to develop a COVID-19 vaccine, and in the words of pundit Emma Vigeland, only one will succeed. Where does the rest of that money go? Coffers. I hate coffers. Who even uses coffers?

I’ll tell you who: bureaucrats. One more story before I retire for the week (writing these columns is often taxing for me and I require a 72-hour nap afterwards): I worked for the government once. During the war, there was a drive to get all able-bodied women to work in factories at home for the war effort. There was also a clandestine animal hiring operation, often with situations as humane as the Japanese-American internment camps. I didn’t last long, but I remember one rabble-rouser who wouldn’t pledge allegiance to the flag. He was an aardvark, so of course he was called on first, and his refusal delayed the whole day, and it was hot, so everyone was mad at him. Story of his life I suppose.

So the aardvark wouldn’t explain why he refused to pledge allegiance. Was he not a citizen? A dissident? A communist, perhaps? He was getting blue in the face, refusing to answer for his actions, so the entire group just picked him up and threw him across the way. I don’t mean a little, I mean over a football field. Not an actual football field, just a really long stretch of concrete buildings. He was never seen again. Even as the company of assorted animals picked him up and prepared to hurl him to another plane of existence, he wouldn’t explain. I didn’t join in the murder but I watched and did nothing to stop it. This has haunted me for years and will likely haunt me for the rest of my life. Everyone returned to the lesson as if nothing had happened.

Maybe the aardvark was a communist. Maybe he was a spy. But the overreaction and indiscriminate actions of my peers was shocking, and ever since then, I’ve pledged allegiance with a shaker full of salt clutched in my other wing behind my back. I can’t trust this flag, this flag that makes people turn into mobs to silence and kill those that offer alternative opinions. But I know no other land, no other way. Is there no hope for me? Perhaps. But my suggestion remains: we need mask handouts. The fact that there aren’t any is further evidence of what I saw that day in the early-1940s: we can do anything, but we’re stubborn in our imagination of what can be done. Thank you. I’m not running for office, I’m just really smart.