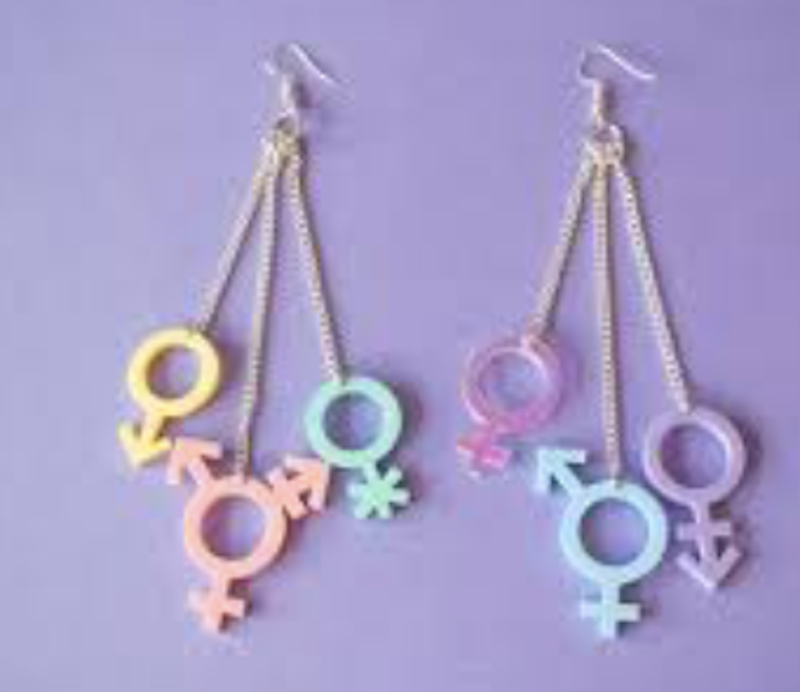 Social distancing reminds me of how clumsy I am with my body. In school I’d often accidentally step on the heels of the kid in front of me when we walked single file, so now I’m constantly looking at my feet to see how far away they are from the people around me. When I’m at work, spraying disinfectant all over the grocery store, I frequently look around to see if my cart is blocking anyone. Sometimes I still bump into coworkers, walls, and customers.

Navigating a genderqueer body in a gender binary world is even more awkward. My body—long hair with bangs, makeup, eyeshadow, and painted nails paired up with broad shoulders and a flat chest—can be seen as either male or female depending on who’s looking. Recently at Target, I was waiting in line to use the self-checkout machines when an employee said, “Ma’am, the woman at register 1 can help you.” At first, I didn’t know who he was talking to, but then realized he meant me and felt elated.

A few weeks earlie, I was about to enter a grocery store when an employee standing outside said, “Sir, you’re going to have to wait in line because we’ve reached the maximum amount of people allowed inside.” I didn’t correct her because it wasn’t worth the hassle.

Because people see me how they want, it’s often hard to tell where I’m supposed to be. At work, for example, there are no gender-neutral bathrooms; just a men’s room and a women’s room. If I go into the women’s room, a customer might think I’m a pervert and demand to speak to the manager. If I go into the men’s room, people might think it’s “proof” that trans people’s identities aren’t valid. I always take a deep breath and use the men’s room to avoid any potential conflicts.

The concept of “passing” is a difficult subject for trans people. While it’s great to have total strangers automatically refer to you with the correct pronouns, the slightest physical suggestion that you may be trans can lead to either discrimination (see the HUD’s recent memo on how homeless shelters can spot trans women) or violence. Passing is especially tricky for non-binary people because we don’t know what we’re supposed to pass as. Does our survival depend on being seen as our assigned birth genders, or on how well we can pass as the opposite sex?

In my experience, sometimes moments of validation come with humiliation. Last year, while flying back home from St. Louis, a TSA agent asked if I wanted to be scanned as either male or female. It was the first time a TSA agent asked that, and for a brief moment I felt seen. “Since I have all the original parts,” I replied, “just scan me as male to be on the safe side.” They still patted me down, though, because the scanner found something odd in the genital region (maybe it was because I had to pee really bad).

I’ve also had strange men say, “Hey, cutie,” while walking down the street. Other people have heard worse, so I’m not complaining, but if two random men thought I looked womanly enough to hit on me, it’s possible that one day a man might try to assault me.

Lately I’ve been thinking about what a post-gender binary world would look like. Society’s becoming more non-binary friendly—Maine now offers non-binary gender markers on IDs—but it needs to go further. I’m not sure what this new post-binary society would entail; some people have suggested doing away with assigning genders at birth, but I don’t know how that would work. But this new society would strip away rigid expectations assigned to our bodies, giving us more space to navigate through the world.