How do you measure time? 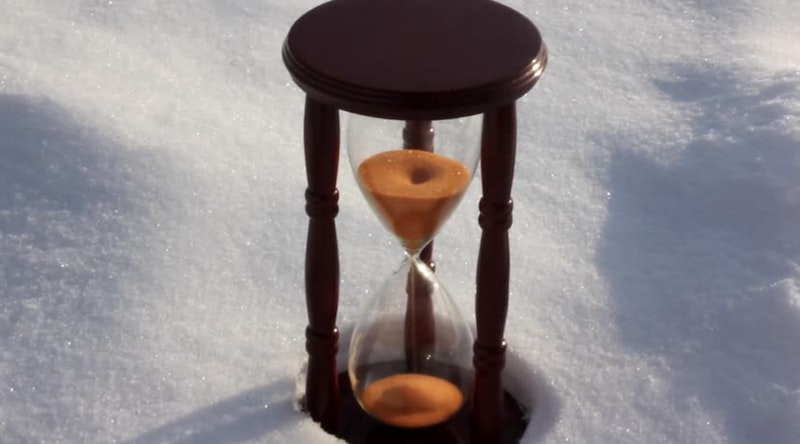 Daylight saving time (DST) ends on October 31st in the United Kingdom and November 7th in the USA. What this means is that the clocks will go back one hour. In the UK the clocks revert to Greenwich Mean Time (GMT) which is the standard time in this part of the world. The same thing will be happening on different dates in different countries around the world.

Have you ever wondered what its purpose is? I’ve heard different arguments over the years. It had to do with Scottish farmers, I remember my father telling me. Due to their proximity to the far Northern latitudes, Scottish farmers need an earlier start, he said. Looking around on the Internet however, I find this argument doesn’t exist anymore. Other arguments refer to Benjamin Franklin’s famous dictum: "Early to bed and early to rise makes a man healthy, wealthy, and wise". Franklin didn’t actually propose DST, he merely wrote a humorous letter suggesting that Parisians could save on candles by rising earlier (he was the American envoy to France between 1776 and 1785) but his satirical observations have become the basis of many of the arguments for DST over the years.

Two men were chiefly responsible for the policy: George Hudson, an entomologist out of New Zealand, who liked to collect insects in the afternoon after work and campaigned for DST in order to extend his hunting hours; and William Willett, a freemason who, on an early morning ride in 1905, observed how many Londoners slept through a large part of the day in summer. He was also a keen golfer who hated his evening game cut short by the sunset.

So we have two individuals who, for selfish reasons, wanted to change the daylight hours for the rest of us: one to collect insects, the other to play golf.

The first city to enact DST was Port Arthur, Ontario, on July 1st1908. The first country to adopt it was Germany during the First World War, as a way of saving coal. Many countries quickly followed, including Britain, in May 1916, and the USA in 1918. Most countries dropped the policy again soon after the end of the war, except, for inexplicable reasons, the UK, France, Ireland and the United States.

As a chronic insomniac the change in hours, twice a year, can have a deleterious effect on my sleep patterns. A robust and regular sleep routine is one of the most important defenses against the scourge of late-night sleeplessness. Disruption to the routine can be very distressing, and it usually takes at least a week for me to get my bearings again. I’ve also observed the same effects in other people. Even those who do not usually experience difficulties with sleep are bleary-eyed and confused for a day or two after the change.

You may wonder why it persists? The policy was introduced to save energy during the war, but the war has long since passed. I use it as an illustration of how out of control we are as a species. Not many people like it. It disrupts everyone’s routine. Even politicians, our captains of industry, and the rich don’t like it. There’s a kind of collective insanity in abiding by a rule that doesn’t do anyone any good. People go half-crazy in the days following the change. They’re more likely to have accidents. They get irritable. They fall out with their spouses.

This is because it interrupts our circadian rhythms. Most animals have an internal clock that’s naturally adjusted to the seasons. Humans are no different. We’re creatures of the light. It’s the Earth and the Sun that tell us when we should wake and sleep. We’re already significantly out of step with the Earth’s rhythm due to our electronically-adjusted lifestyles. We stay up late into the night in an induced hypnotic trance watching the flickering images on our TV screens. We sleep in long after daylight has begun. We work in enclosed spaces in artificial light insulated from the sunlight that gives us life.

This isn’t the only way that human beings are maladjusted in our relationship to time. Our calendar system is a strange artifact. As a measurement of time it’s completely out of kilter. Our months shift in duration from 28 to 31 days, depending on the month and the year. The only way we can remember how long our months are supposed to last is by repeating a piece of doggerel to ourselves. “Thirty days hath September, April, June, and November,” we mutter, trying to work out what the date might be at the end and the beginning of every month.

This is due to the shift from a lunar to a solar calendar. Most hunter gatherers relied on the moon to track time, while agriculturalists are more dependent on knowing the time of year. Stonehenge, for example, was built to track the solar year. Some calendars today, including the Chinese and the Islamic, are still fundamentally lunar in nature, but this always involves large readjustments to the calendar due to the fact that a lunar year is significantly shorter than a solar year. This difference in size between the lunar and the solar year is one of the historic problems of mankind, and much mental energy has been expended on trying to resolve the difference.

Another problem is how we decide when the year begins. This differs from culture to culture. Some set it on the Spring Equinox, others in the Autumn. The Celtic New Year takes place on October 31st.  This is known as Samhain, meaning summer’s end. As the year is cyclical, when the year starts is arbitrary, but it should at least be attached to a significant point in the year: say an equinox or a solstice. In northern Europe, traditionally it took place around Yule, the winter solstice. This makes sense, as every day after the solstice the days are getting longer and we can truly celebrate the rebirth of the Sun.

Instead of this we start our year on January 1st. This is 11 days late according to my calculations. We should be long done with our celebrations by then, but we’re only beginning. We’ve missed the year and it hasn’t even started yet.

The word “calendar” is from calends, which means “the called” and is Latin for an account book. The calends was the first day of the Roman month, when debts were paid. So a calendar is an arbitrary accounting system for calling in debt. It’s a bureaucratic structure meant to keep the moneyed classes serviced by debt. It has no relationship to the progress of the year, to the Sun or the Moon, or to the cycles of the seasons. It’s a bit like a magic spell which has been cast over our minds in relationship to time. We live inside of it, strangely disorientated by its arbitrariness and dysfunctionality, constantly dependent upon consulting our charts to find out what day it is. It’s like a clock that doesn’t quite tell the time ticking away in our heads, counting down our lives to oblivion.

The other problem is the start date of the calendar, which is linked to the birth of Jesus. This is culturally specific, associated with the triumph of Western culture over the rest of the world. It also makes thinking back in time very complex as anything that happened before this date is recorded backwards. Earlier dates have a higher number than later ones.

It suggests a hierarchy in time, as if dates prior to the birth of Christ are inferior, and less civilized, than subsequent dates. Time is broken by this process. History is divided. We have, almost unconsciously, rejected our own past. We have rejected who we are.

There have been attempts to reform the calendar system over the years. One of the most significant was by Robert Anton Wilson who wrote an article called How to Live Eleven Days in 24 Hours. Unfortunately—and ironically—it’s undated, so I can’t tell you when it was written.

He first started thinking about the calendar, he tells us, when he was writing the Illuminatus! Trilogy with Robert Shea. Between them they devised a new system, which they called Anno Lumina, Year of Light. Historical dates are strung out along a single timeline, starting in 4000 BC with the birth of Hung Mung, an ancient Chinese philosopher who answered all questions by shouting loudly “I don’t know! I don’t know!” Thus 4000 BC is year one A.L. and all dates follow on from that; today, for example, is the year 6021 A.L.

After that Wilson realized that all calendars, even his own Illuminati one, are an attempt to impose a single structure on a complex universe, and instead adopted a multi-faceted approach, in which he gave the date in a variety of different formats. ARobert Anton Wilson article might be dated in any combination of 11 different calendar formats, included the French Revolutionary, Hebrew, Thelemic, Mayan, or Chinese.

As to whether this is a practical solution to the problem of time, I’ll leave that to you to decide.