It's going to be a bumpy ride. 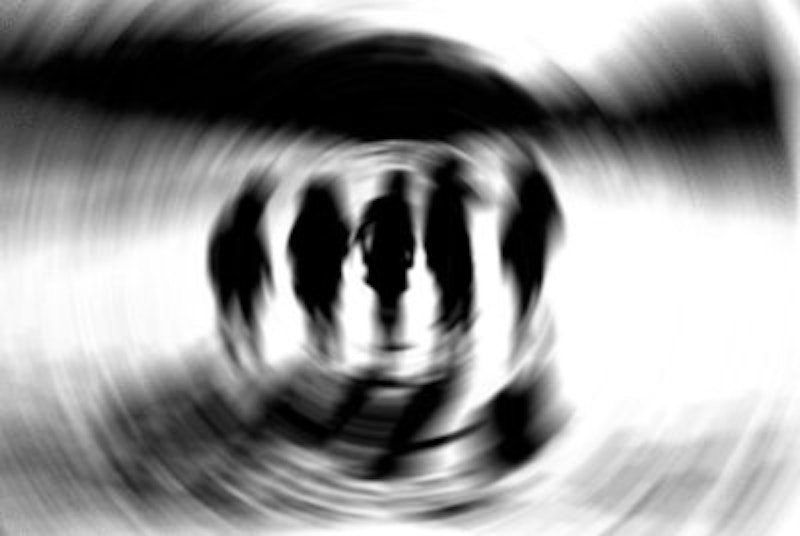 It’s the End Of The World As We Know It, and while I don’t exactly feel fine, I’m pretty optimistic about the world situation for the first time since 9/11. I was eight years old when the USA and the USSR faced off during the Cuban Missile Crisis of 1962. That was hairy. The USA had positioned nukes right on their doorstep, in Turkey, and so the Soviets planted a few in Cuba. Oddly, I remember that time entirely in black and white, like an old Twilight Zone episode or Dr. Strangelove. We came close. We’re closer now.

I saw the New Feudalism coming down the pike in 1981, when Ronald Reagan broke the Professional Air Traffic Controllers Organization, a union that had supported him in his 1980 Presidential campaign. When Reagan took office in 1981, there were on average 150,000 “temporary” workers hired per day in America. By 1984, when he was re-elected, that number had reached 1,500,000. I don’t know where it is now; I don’t want to look.

In 1992, incumbent President George H. W. Bush supported NAFTA, while his ostensible opponent Bill Clinton claimed to oppose it. Actually, they were on the same team. I knew because I knew about the cocaine coming in from Nicaragua through Mena, Arkansas. I voted for Ross Perot, who took 18.9 percent of the vote. Clinton signed NAFTA, and that “giant sucking sound” that Perot said would accompany the flow of American jobs to peasant labor South Of The Border ensued, at roaring volume, louder than anything else, like Motorhead.

Over the past three decades, I’ve put up with a lot of shit from people who look but don’t observe. Mainly, I got illiterate accusations of being “Chicken Little” from people who hadn’t read the book: it’s Henny Penny who claims the sky is falling, morons. I’ve gotten the “Tinfoil Hat” accusation for my interests in Fortean phenomena, Tesla, Bucky Fuller, and obscured history, popularly known as “conspiracy theory.” I get “drug addict” and “alcoholic” a lot, even today, despite the fact that I have only ever been truly addicted to tobacco, an herb, and I’ve never been to an AA meeting, nor do I have any need or desire to attend one. Booze beats Valium, hands down.

On board the carrier USS Theodore Roosevelt in the first week of 2002, while they were bombing the crap out of the Tora Bora region, I opined that if we put boots on the ground anywhere in the Middle East in the wake of 9/11, we’d be fucked. The khaki officers agreed.

In short, I’m keen on history, and pretty goddamned good at tracking trends. I think 2015 is going to be as painful and ecstatic as having a baby, one experience that I can assure you I have no familiarity with. The American Empire is over. Imperial overreach has peaked with the Ukraine coup, a purely NATO device to undermine Russia. People with no integrity have no way of comprehending the thinking of people with integrity. Psychopaths are not usually very smart. The West doesn’t grasp Vladimir Putin, because they can’t wrap their mercenary heads around the idea of a national leader who can’t be bought, who cares about his nation and his people. Western leaders only care about their sponsors. Perot quit politics, saying shadow government forces had threatened the lives of his family. No third-party candidate for the presidency has been allowed into the sanctioned debates since. They wouldn’t even allow Ralph Nader into the hall in 2000, even though he had a ticket.

The West put boots on the ground in Afghanistan, the Boneyard Of Empires. Not only don’t they read Kipling: they don’t remember what happened to the USSR, which was right next door.

It looks dark. The crisis moment on my only ayahuasca trip, back in 2004 in a remodeled firehouse in Jersey City, came after the fourth cup, when the little hobbitty Peruvian shaman shoved a pipeload of Salvia Divinorum into my face. It was then that I became convinced that I had fallen into some Lovecraftian night eternal, an unending darkness. That perception was immediately followed by an explosion of light and color, tropical fecundity in its wildest and paradoxically most Lovecraftian form. The rain forest occupied my head. I saw the jaguar.

It’s all turning, because the Reaganomics Model and the imperial model are short-sighted and unsustainable, a smash-and-grab by a small gang of well-bred, well-coiffed, and well-manicured looters in designer suits. Their police state model for the future is failing, universally. Cops are targets now. Radical capitalism run amok has resulted in global uprisings increasingly tending toward mutant forms of National Socialism and Communism. These mutations might very well be more viable than the original forms. Western “democracy” is as dead as Julius Caesar. It’s not enough to complain: one must build a better model.

The police in the USA are killing black Americans at a rate that the Ku Klux Klan in its glory days could only dream of. Everybody knows, everybody sees it.

Drug prohibition is on its last legs, staggering mindlessly toward repeal. The private prison industry is coming under intense scrutiny for its contractually guaranteed quotas and its shameless use of prisoners as slave labor. The latest tech bubble is bursting, the new real estate bubble is bursting, and the American economy is currently driven by the Black Market and sub-prime auto loans. Saudi Arabia and the American oligarchy are attempting to bankrupt Putin’s autonomous Russia and other states that refuse to kneel before American hegemony by artificially driving the cost of oil down. This is already backfiring, and it will destroy the USA economy. That’s not a bad thing.

The USA, the EU, and NATO are the final countdown for empire, and they are falling apart. Greed and corruption, left unchecked, invariably fail. Cannibalism is the logical end of capitalism.

2015 is going to be a bumpy ride, but as Fox Mulder says to Agent Scully in the very last line of the very last episode of The X-Files, “Maybe there’s hope.”

I think I saw you in an ice-cream parlor, drinking milk shakes cold and long.