The Art of Resolutions

Don't be too hard on yourself. 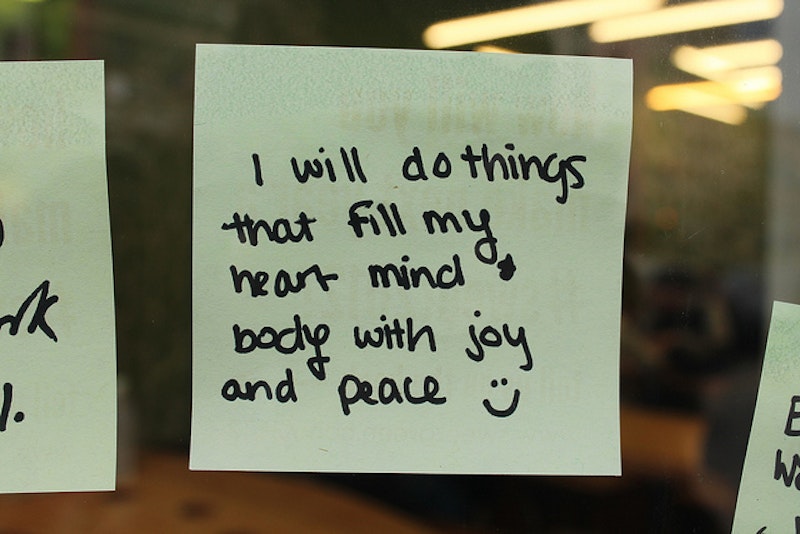 Most New Year’s resolutions are forgotten after a few weeks. Gyms benefit from the increase in membership and their treadmills are used more frequently. The sale of nicotine patches and gum increases as smokers try to quit: many this year will jump on the vape bandwagon and hope that no studies are released about the mysterious syrupy liquid they’re inhaling. Yoga classes fill up and diets are begun. For a while, people take an interest in making time for themselves. As they ease back into school or work, gym memberships are suspended until the next year and lighters are held up to cigarettes, both invoking pangs of guilt.

I used to make the same resolution every year, telling myself to be healthier. Whether that meant giving up smokes or dropping a few pounds, I never followed through. I made excuses, mostly promising myself that I could do it when I was less busy, less stressed out. About three years ago I decided to revolutionize my resolutions. Instead of inventing them at midnight on January 1st, I began thinking months in advance about what I needed to improve about myself. Instead of diets, I decided to be less hard on myself. More a mantra than a resolution, I repeated the words whenever I pulled on jeans that didn’t quite fit or criticized my reflection in the mirror. Last year, after realizing that a few bad habits were getting the better of me, my resolution was to live in moderation. I quit hanging out with people who negatively influenced me and, after almost six years, stopped smoking cigarettes.

This year, after careful thinking, I’ve chosen a reasonable resolution. After absorbing endless articles of horrifying news, I’ve decided that in 2015 I’m going to be more grateful of what I have. Not just material possessions; but my friends and family, opportunities and the roof over my head. Every day a newscaster grimly informs me that, somewhere, lives have been lost. Somewhere else, bombs dropped. There are countless reasons why I should appreciate my life and myself. I should appreciate even the most mundane aspects of my day simply because I have the freedom to experience them.

I’d be hypocritical to say that no one should give in to diet fads or plan an unrealistic workout schedule, but I’ve wasted enough money on Atkins bars and enough time sweating next to strangers to know that there are more efficient ways to improve your mentality or physique. Any improvement begins internally. I’m young and have a lot to learn, but I can’t let negativity or materialism keep me from reaching my greatest potential.