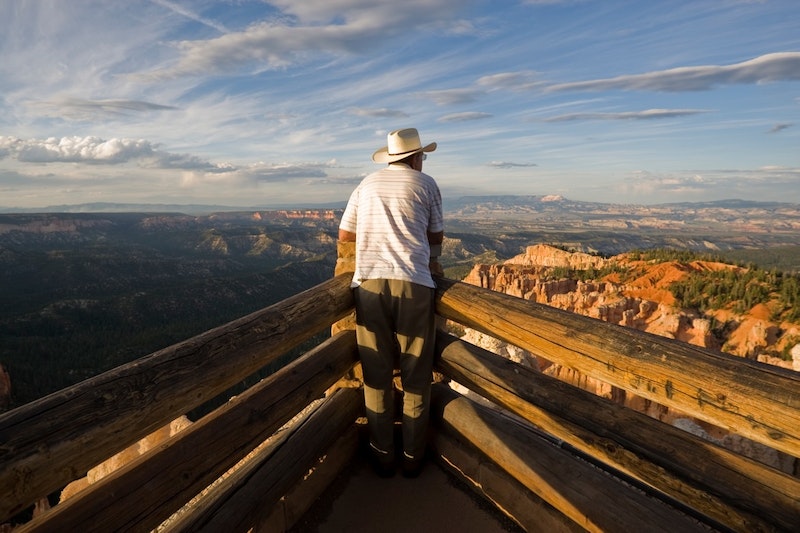 All photos courtesy of the author.

I hate postcards. But I've come to admit that the best travel photos are themselves only postcards. When you get back home, you address them to yourself and send them off, then filed away into shoeboxes or saved to dusty hard drives.

But, unlike a postcard, when you do dust off your old travel photos, you'll find that the ink has hardly faded; the sheer adventure of journeying comes back again even stronger than before. We buy postcards to gain a perspective on a place; we take travel photos to save a perspective of ourselves.

Seven months ago, newly in love and flush with a very small amount of cash, I took a road trip with my girlfriend Cara from our home in Los Angeles to Colorado, Utah and Arizona, stopping along the way at four National Parks. We were thoughtfully ignoring the global recession, trying to catch that final glimpse of America before the sun set over the horizon each night. Whenever I look back, I see that feeling of freedom permanently printed on these pictures, their colors growing only more vibrant with age.

Photo 1
Our companion for the road trip, my 12-year-old BMW convertible named Hans. We managed to fit two week's worth of luggage, suntan lotion, camera equipment, a couple of bottles of wine, two full picture frames and some assorted snacks into the tiny trunk. Snacks, as you might imagine, are very important.

Photo 2
Abandoned Zinc mine outside of Leadville, Colorado. Altitude: 16,000 ft. The local high schoolers played in the small town above the mine, drawing graffiti on the floor of the broken bowling alley and smoking pot in the empty schoolhouse. This room was called the "Secret Blood Room" for reasons I likely don't need to mention. It was creepy up there. The kind of emptiness that makes people believe in ghosts.

Photo 3
A much more pleasant time at the Salida, CO rodeo. The crowd was there to watch the local schoolchildren compete in Mutton Bustin'—basically bull riding on a sheep for little cowboys and cowgirls. The kids hung on as long as they could before the sheep could buck them to the ground, whereupon they'd get up and try their best not to cry as they walked back to their parents. My cousin Ruby actually won the whole damn thing, hanging on the sheep so long the ranch hands had to take her off themselves.

Photo 4
The first of our National Parks: The ruins at Mesa Verde. These cliffs were hollowed out hundreds of years ago by a nomadic people that vanished, likely further South, leaving behind tiny cities made of stone. The only way in was a ladder made of tree branches, the only view being of the sandals of the family ahead (looking down wasn't an option). Once inside, the homes and ceremonial chambers were cramped—major passageways no larger than a crawlspace. But what struck me were the black marks on the walls made by decades and decades of tourists, grabbing the stone to catch their balance, the oil in their hands staining the rock permanently.

Photo 5
One of two forest fires we saw, this one was off of an access road leading to the Grand Canyon. It was a controlled burn, but the destruction that hung in the air was chilling. Cara and I pulled over and wandered out, more afraid of being spotted by the firefighters than of smoke inhalation. We stood there contemplating the merits of causing a fire, when Cara looked down and calmly said, "My shoes are melting." I looked down and it was true for me as well: The heat from the ground was slowly melting through the rubber in my cheap slip-on shoes, giving off a small stream of smoke from each sole. We sprinted back to the car.

Photo 6
Many tourists who make the trek to the Grand Canyon completely overlook the other two National Parks nearby. If the Grand Canyon were a part of a staircase, it would be the bottom step, with Zion Canyon one step above, and the park where this photo was taken, Bryce Canyon, the step at the very top. The snow and rain that gathers at this park gets sucked through the ground down the stairs towards its the Colorado River and it is this "sucking" process that has drained Bryce Canyon, leaving behind these spectacular formations.

Photo 7
After days spent in the dry desert rock, it was a relief to drive back to California, to our favorite of the National Parks we visited: Sequoia. It is impossible not to feel giddy when you see these giant trees and imagine them as felled heroes. The sheer scale of everything in this park, from tree to branch to pinecone, made the two of us feel like we were going for a walk in the woods of our youth, the altitude shortening our breath but not stealing away our excitement, enough majesty to make one feel humbled and exalted all at once.